Purpose: For Type 1 diabetic patients, continuous intraperitoneal insulin infusion (CIPII) with an implantable pump shows many advantages such as rapid profile of insulin adsorption as well as clearance, improving glycemic control1. However, catheter obstruction is one of the limitations hindering the transition of this technology into the wider diabetic population. The intraperitoneal implantation of the catheters elicits a series of inflammatory events that can ultimately result in catheter blockage and failure to deliver insulin. It has been reported that the size and geometry of the implant can influence the recruitment of inflammatory cells to the implantation site2-3. Hence, understanding the effect of size and geometry of intraperitoneal catheters (including the outer diameter and the tip-configurations of catheters in the IP space) on the fibrotic response at both the cellular and molecular level can provide important insight to modulate the inflammatory response, improve the longevity of the catheters, and thus increase patient acceptance of CIPII.

Methods: Catheters with either different outer diameters (0.1-inch vs 0.048-inch) or different geometry at tip end (round shape vs cone shape) were implanted intraperitoneally into rats with a small outlet for insulin delivery. Catheters was explanted at different times. A gross macroscopic analysis was performed, followed by cytological evaluation of the blocked/encapsulated tissue surrounding the catheter tip end using various staining and imaging methods. The presence of fibroblasts and collagen is the hallmark feature of fibrous capsule formation, which is generally considered as the last phase of the inflammatory response to implanted devices. Accordingly, H&E staining and masson trichrome staining was used to determine the existence of fibroblasts and collagen. Immunofluorescence staining was also performed to confirm the presence of fibroblasts.

Results: Cytological analysis demonstrated that fibroblasts and collagens were the dominant components in catheter blockages/encapsulations. The amount of the collagen present in the blocked samples increased with the growth of blocked samples at tip end and encapsulated tissue surrounding the intraperitoneal catheter (Figure 1).  This pattern of catheter obstruction progression was identical in all catheter designs, but with various degree. Rounded-tip catheter showed a less degree of the fibrotic response than the cone-tip catheter, showing minimum cases of encapsulation as well as a thinner layer of fibrous capsules, compared to cone-tip catheters. For the catheters with the same tip geometry but different size, we noticed that compared to the catheters with an OD of 0.1 inch, the catheters with a smaller OD of 0.048 inch triggered less inflammation as evident from a reduction in the thickness of the fibrous capsule for all time points. However, from a long-term perspective, compared with catheters with a diameter of 0.1 inch, even though the small catheter triggered less fibrotic reactions, it also requires less amount of inflammatory cells (e.g. macrophages and fibroblasts) and proteins (e.g. collagen) to fully encapsulate the small size catheters, and thus the number of cases of catheter encapsulations is similar to the observations of large size catheters (Figure 2).

Conclusion: The size and tip geometry of intraperitoneal catheters influence the host fibrotic response to catheters in both short and long durations of implantation. These results provide new insights to improve catheter design and thus decrease the incidence of catheter obstruction. In addition to reducing the inflammatory response to catheters at the implantation site, a good catheter design must maintain functionality (e.g. successful passage of insulin through the catheter lumen area) to achieve long-term performance. 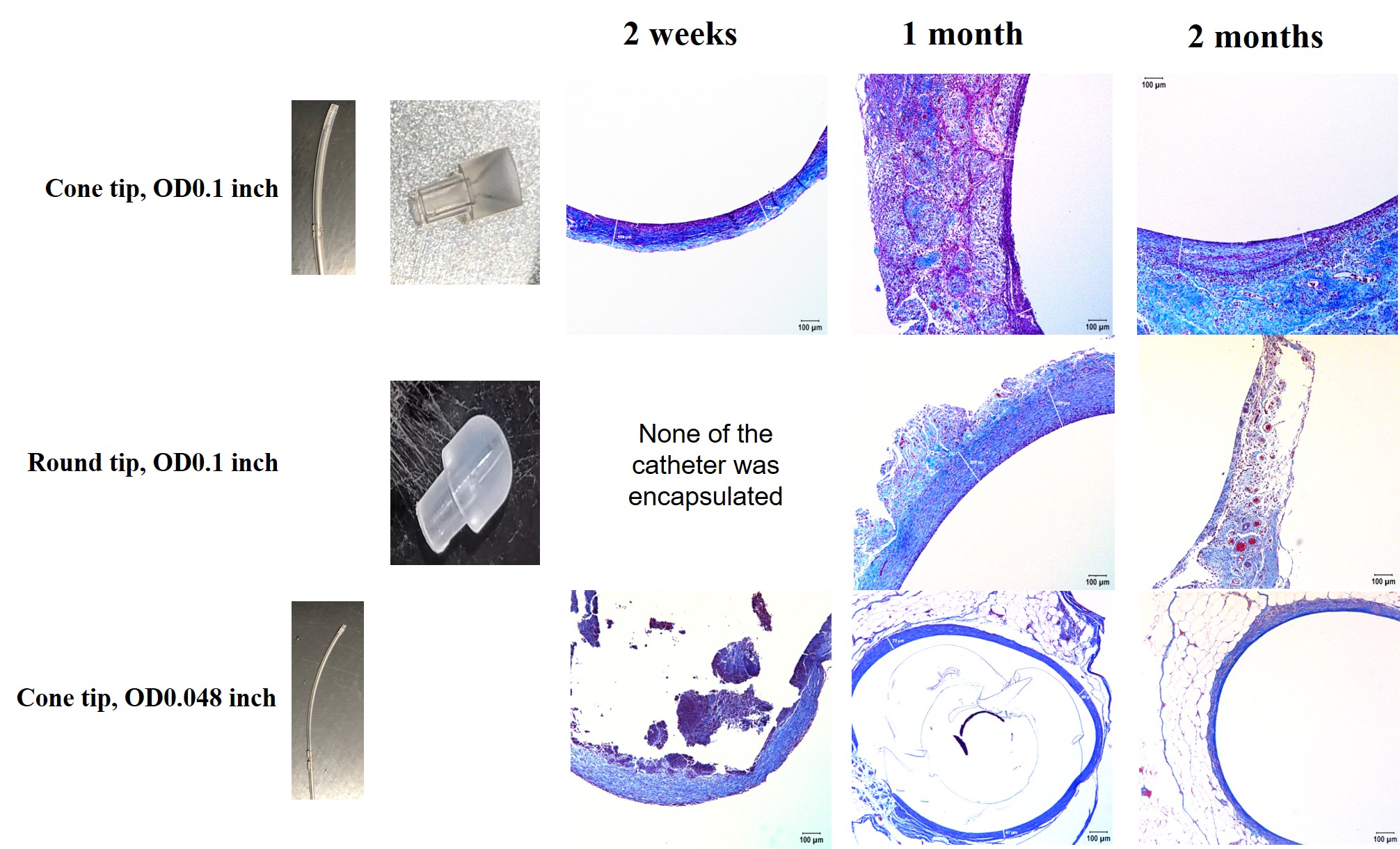