Purpose: Through the liquisolid technique, drugs with dissolution as the rate limiting step may be solubilised in non-volatile liquid vehicle and transformed into acceptably flowing compressible powders. As fast-release liquisolid compacts require very high amount of liquid vehicle, there is a dire need for more effective carriers for liquid adsorption to reduce tablet weight. The aim of this study was to investigate the applicability of Neusilin US2 (magnesium aluminometasilicate) as a carrier for liquisolid compacts of model drug, domperidone, a practically insoluble antiemetic drug with low bioavailability, in comparison with the commonly used grades of microcrystalline cellulose (Avicel PH-101, Avicel PH-102 and Avicel PH-112).

Results: The loading factor was found to be predominantly very high for the carrier Neusilin US2 when compared with the Avicel grades (as given in Figure 1). It was observed that the loading factors depended on the specific surface area of the investigated excipients. These values of Neusilin US2 have resulted in reduced tablet weight. The prepared tablets were found to pass the pharmacopeial tests concerning the weight variation, assay, friability and disintegration. The dissolution data (as given in Figure 2) has shown marked increase in dissolution of the liquisolid tablets compared to pure drug. Though slightly slow compared to Avicel tablets, FC4 has shown complete release. Further studies on the dissolution profiles have suggested that first order release kinetics were followed by the tablets and the drug release occurred by erosion mechanism from the Neusilin US2 tablets. While the FTIR studies eliminated any drug-interactions, the DSC, XRD (Figure 3) and SEM data accounted for the conversion of insoluble crystalline drug particles to solubilised amorphous form.

Conclusion: The domperidone liquisolid tablets prepared with Neusilin US2 have shown enhanced drug dissolution because of increased wetting properties of the drug particles and the large surface area available for dissolution. The studies have highlighted the applicability of Neusilin US2 as carrier for the formulation of efficacious liquisolid compacts when compared to the commonly used grades of Avicel. 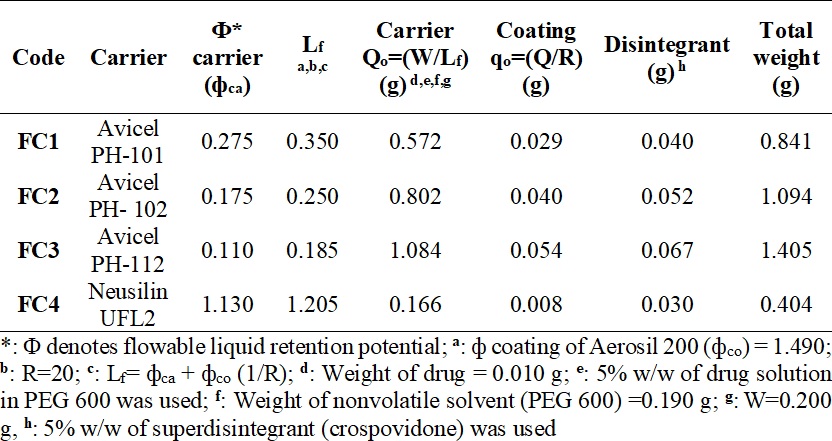 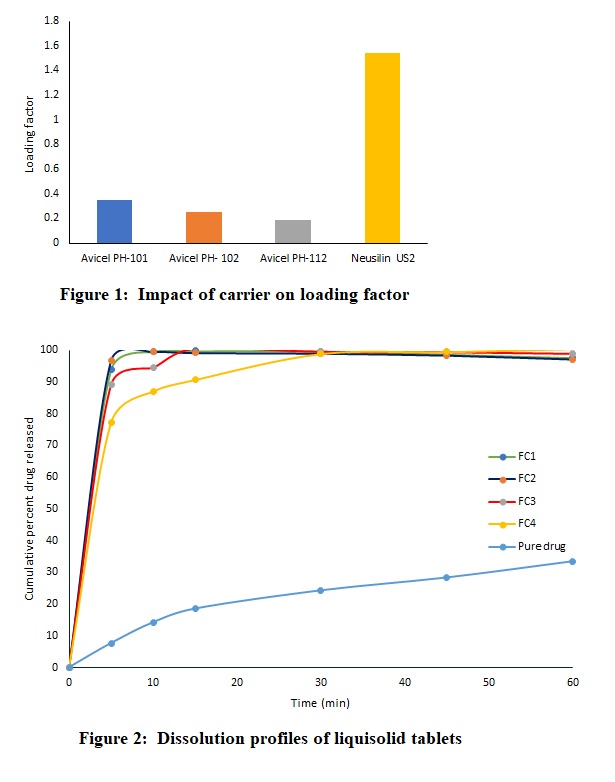 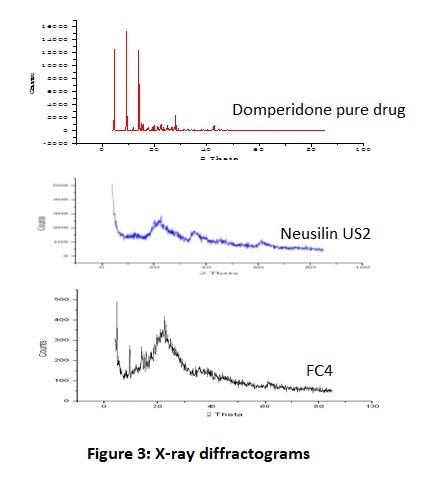