Effect of PlasdoneTM Copovidones on the Stability of Atorvastatin Calcium Trihydrate Amorphous Solid Dispersions Prepared via Hot Melt Extrusion: Role of Plasticizers in Processability and Stability

Purpose: The trace levels of peroxide in PlasdoneTM S630 grades may cause degradation of drugs sensitive to oxidation. The present study was aimed to evaluate the effect of PlasdoneTM 630 copovidone grades on the impurity levels of model oxygen sensitive Atorvastatin calcium trihydrate (ACT) amorphous solid dispersions (ASDs). Further, the influence of tween 80 and polyethylene glycol-400 on processability and the oxidative degradation of ACT ASDs was studied.

Methods: In the present study, ACT was employed as a model drug and copovidone grades namely PlasdoneTM S630 ultra (PS630U), PlasdoneTM S630 (PS630) were investigated as polymeric carriers. Tween 80 and polyethylene glycol-400 were used as plasticizers to reduce the processing temperature and to investigate the effect on oxidative degradation of ACT. The physical mixtures (PM) of F1, F2 (Table 1) and PM of F3-F6 (10% w/v of PEG 400 and tween 80 used as a granulating liquid) were sieved through ASTM #30 mesh and then mixed for 15 minutes in a V-blender (GlobePharma, MaxiblendTM). Hot melt extrusion (HME) was performed using a co-rotating Prism Eurolab 16mm Twin-screw extruder (Thermo Fisher Scientific, USA) at a feed rate of 10g/min, screw speed of 100 RPM and extrusion temperatures between 140 to 180 °C (Table 1). The extrudates obtained were milled using a Fitzmill (FitzPatrick, USA) with a 0.020-inch sieve at 1200 rpm and the milled extrudates were analysed by differential scanning calorimetry (TA Instruments DSC 2500) to ensure an amorphous form of ACT. The milled extrudates (48% w/w) were blended with extra granular components such as microcrystalline cellulose (43%), croscarmellose sodium (8%), colloidal silicon dioxide (0.5%) and magnesium stearate (0.5%). The final blend was compressed into tablets using a 10 mm round concave tablet punch set at a compression force of 5.7 - 15.8 KN, turret speed of 16 rpm. The compressed tablets along with the milled extrudates were placed for stability studies at 25°C/60% RH and 40°C/75% RH conditions to monitor the oxidative degradation of ACT.

Results: Initially PM of F1 and F2 were extruded at a temperature of 170°C, with three mixing zones. Extrusion with these formulations was not processable and resulted in processing torque above the instrument limit (24Nm). Further extrusion trials conducted by varying the screw configuration (two and one mixing zone) with constant screw speed, feed rate, and temperature produced high processing torque. However, increasing the barrel temperature to 180°C with three mixing zones facilitated the extrusion with relatively less processing torque (19.2 Nm). The extrusion in the presence of 10% w/v plasticizers significantly decreased the processing temperature to 160°C and 140°C for F3, F4, and F5, F6 respectively with low processing torque. The milled extrudates containing tween 80 (F3, F4) compressed into tablets at a compression force of 15.8 KP to obtain 7 KP hardness, was significantly higher than the compression force of F1, F2, F5, and F6 formulations. The DSC thermograms of milled extrudates showed an absence of the melting peak of ACT (Figure 1), indicating the complete transformation of crystalline ACT into an amorphous form. The stability studies are in progress.

Conclusion: The HME processability of PS630U and PS630 with ACT was improved in the presence of plasticizers. ACT was in amorphous form in the extrudates. Further, dissolution, FTIR, and other characterization studies will be conducted, and stability studies are in progress to study the effects of PlasdoneTM grade copovidones and plasticizers on the oxidative degradation of ACT. 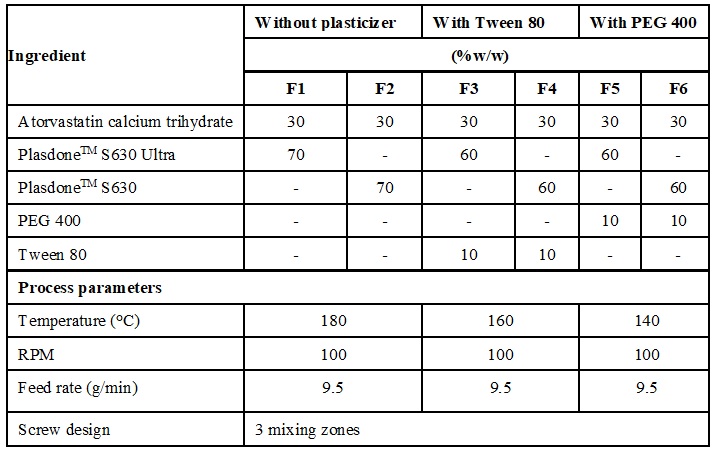