Purpose: In a previous study we found that in vitro release testing (IVRT) using the Phoenix™ DB-6 Diffusion Tester (DB-6) is comparable to an immersion cell apparatus described in USP General Chapter < 1724 >. The purpose of this study was to further assess effects of selected test variables on drug release from 5%, 10% and 20% formulations of a pleuronic lecithin organogel (PLO) and a Lipoderm®-based cream in our IVRT method using the DB-6 apparatus.

Methods: Formulations were loaded into the sample compartments of DB-6 cell caps (n=3 per formulation x strength). A 0.45u Supor® membrane provided the interface between the sample and receiver media. Assembled DB-6 cell caps were placed on the diffusion cells containing 30mL PBS or 40% ethanol at 32⁰C, magnetically stirred at 200 RPM or 400 RPM. Samples were taken at 0.5, 1, 2, 3, 4, 5, and 6 hours with ketoprofen concentration determined by HPLC.

Results: Our previous data showed that cumulative ketoprofen diffusion expectedly increased with drug concentration, except when using phosphate buffered saline (PBS) as receiver medium where flux from the 20% did not exceed that from the 10% formulation. We thought this was likely due to compromised sink conditions of the lower-volume, DB-6 cell (30mL). Suspicions were confirmed after replacing receptor medium with 40% ethanol in PBS which resulted in ketoprofen release-rates proportional to drug concentration. We also confirmed results found with immersion cells that demonstrated greater ketoprofen release from the PLO formulation compared to Lipoderm at all strengths.

Conclusion: IVRT results of ketoprofen formulations using the DB-6 apparatus resulted in data that meet standard criteria for a IVRT to be reliable with specificity and sensitivity. Results also demonstrate that ketoprofen release rates from PLO is greater than that from Lipoderm-based cream. 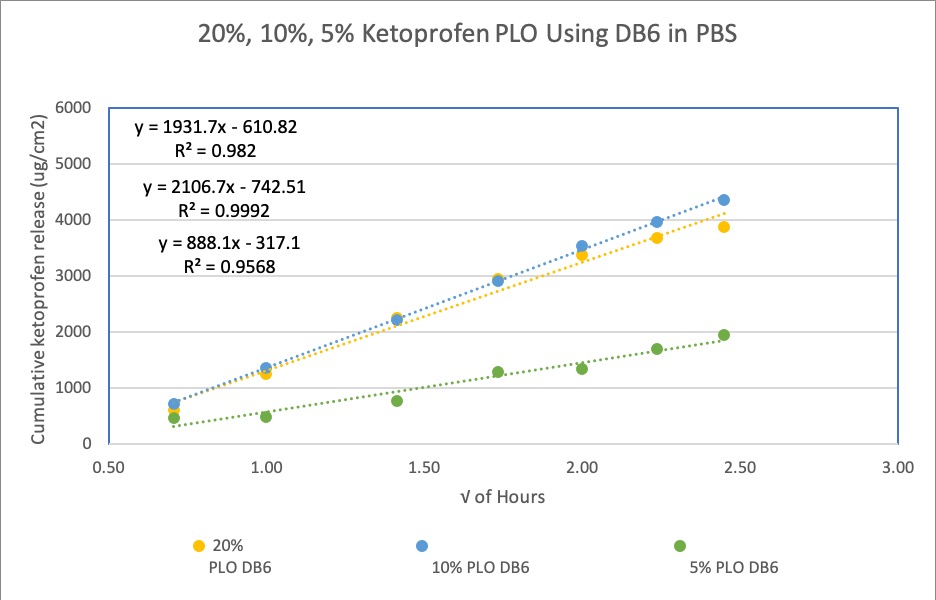