PBBM Analysis of the In Vivo Behavior of Amorphous Solid Dispersions Based on Water-Soluble versus Water-Insoluble Carriers: A Fenofibrate Case Study

Purpose: The objective of this study is to evaluate the in vivo performance of a low solubility drug, fenofibrate (FNB), formulated as amorphous solid dispersions (ASDs) in polymer-carriers of different solubility properties using a rat model, and to analyze the results using physiologically based biopharmaceutical modeling (PBBM) with GastroPlus® 9.7 software tool (Simulations Plus, Lancaster, California). The polymer solubility is known to determine the drug release mechanism from ASDs, for example, ASDs based on medium-insoluble polymer carriers having a matrix-regulated drug diffusion mechanism tend to show a more sustained supersaturation whereas those based on medium-soluble polymer carriers having a dissolution-controlled mechanism tend to show a spring-and-parachute type of non-sink dissolution profile with a fast surge of drug supersaturation followed by a similarly fast decline in drug concentration due to drug precipitation (Sun and Lee 2015). The PBBM is used here as a tool to assess in vivo dissolution/precipitation of FNB in the rat model upon oral administration as ASDs.

Methods: The ASDs of FNB, a BCS class II model drug with pH independent solubility, were prepared in (a) polyvinylpyrrolidone (PVP) (water-soluble polymer, dissolution-controlled release mechanism; (b) chemically crosslinked poly(2-hydroxyethyl methacrylate) PHEMA hydrogel beads (water-insoluble polymer, diffusion-controlled release mechanism), and (c) fully hydrolyzed, physically crosslinked poly(vinyl alcohol) (PVA) (water-insoluble polymer with higher swelling capacity than PHEMA, diffusion-controlled release mechanism). The in vivo performance of the ASDs formulated with these three polymers of distinct properties was evaluated in a rat model. In a parallel study design, 8 groups (n=5 each) of overnight fasted male Sprague-Dawley rats received gelatin mini capsules filled with either a single dose of crystalline FNB, amorphous FNB formulated in ASDs at a total dose of 0.5 or 1 mg of FNB. Blood concentrations of fenofibric acid (FA), the pharmacologically active metabolite of FNB, were monitored up to 24 h post-dose. To understand mechanistically the ASD dissolution behavior under physiological conditions, modeling was conducted using GastroPlus® 9.7 with implemented Advanced Compartmental and Transit (ACAT®) model. Model input parameters were based on in vitro studies, calculations from ADMET® predictor 9.0 and literature. The key modeling assumptions were the following: precipitation to a lower energy form of FNB occurs for all tested ASD formulations given the high Dose number (Do) in the gastrointestinal (GIT) fluids and/or polymer matrix; maximum achievable degree of supersaturation level (i.e., solubility) is a function of different supersaturation generation-rates from each ASD in FaSSIF; and the entire absorbed dose of FNB is rapidly and completely converted to FA. The default fasted rat physiology was selected in GastroPlus® with theoretical surface area/volume (SA/V).

Results: The in vivo dissolution of FNB predicted by GastroPlus® as a function of time in three main sites of FNB absorption (i.e., Jejunum 1, Jejunum 2, and Colon) after oral administration of tested ASDs are presented in Figure 1. In the case of ASDs based on water-insoluble polymers, the drug release of FNB seems to reach a more sustained non-sink dissolution profile in all three in vivo GUT compartments when compared to that of the ASD based in PVP, but at a much lower supersaturation levels of FNB than that of the ASD in water-soluble PVP (c.f., Figures 1c, f and i). Furthermore, the in vivo dissolution of FNB from PVA-based ASDs outperforms the one from PHEMA-based ASD as well as outperforms that from the water soluble PVP-based ASDs in the distal regions of the GIT as evidenced by its higher amount of FNB dissolved in the Colon (c.f., Figure 1i).

Conclusion: The ASD release mechanisms involved (i.e., dissolution- vs. diffusion-controlled) and the magnitude of “spring-and-parachute effect”, impacting the bioavailability, can be attributed to the nature of the polymer carriers. The predicted in vivo dissolution in the small intestine (Jejunum) by GastroPlus® captured well the typical kinetic solubility profiles from ASDs in water-soluble and water-insoluble polymers. The results of this study serve as a proof of concept in rats of strategies to modulate the “spring” in the resulting ASD kinetic solubility profiles. Moreover, this study also reinforces that optimization of ASDs based on medium-insoluble carriers is still required for them to become effective bioavailability enhancing strategies for poorly-water soluble drugs. 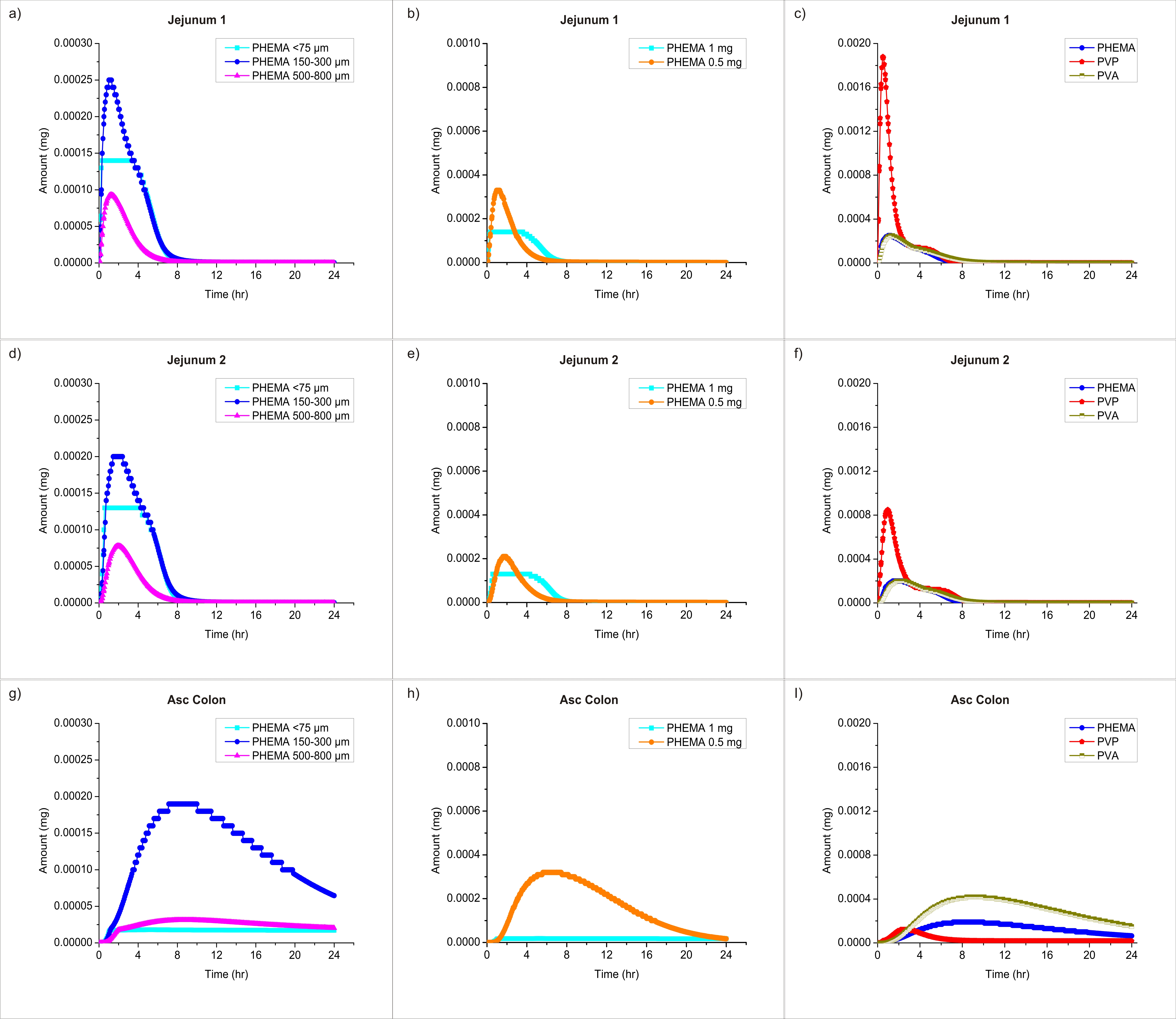