Purpose: Lipid-based nanocarriers are increasingly being explored for the delivery of RNA therapeutics. Particle size, polydispersity index (PdI) and encapsulation efficiency (EE) are some of the critical quality attributes influencing the bioperformance of these nanocarriers. The present work focuses on a lyophilized drug product comprising of siRNA encapsulating lipid nanoparticles (LNPs). The objective was to evaluate the impact of formulation and processing during LNP manufacture and lyophilization on the critical quality attributes in support of commercial drug product development.

Step 2: Pre-formulation by removal of organic solvent, buffer exchange and concentration of LNPs

Step 3: Formulation by addition of cryo- and lyo-protectants

The formulation and processing parameters evaluated in the study are listed in Table 1. Particle size distribution, PdI and EE were monitored at each of the four steps. Average particle size and PdI were determined using dynamic light scattering on a Malvern Zeta Nanosizer. The encapsulation efficiency was assessed by measuring both free (i.e., unencapsulated) and total siRNA concentrations in a given sample. To determine the quality attributes of the drug product, the lyophilized cakes were reconstituted using ultra-purified Milli-Q water and measurements were performed on the reconstituted samples.

Conclusion: The siRNA encapsulating LNPs exhibit a tendency to increase in particle size during the various manufacturing steps, particularly during lyophilization. Faster freezing rates were better at preserving particle size, potentially by reducing aggregation due to less time spent in the mobile state above the Tg’. Use of a smaller nozzle diameter to produce smaller LNPs was helpful in accounting for the increase in size between Step 1 and post reconstitution. Overall, higher lipid concentrations seem better at preserving particle size, and also from a scalability and reproducibility perspective. 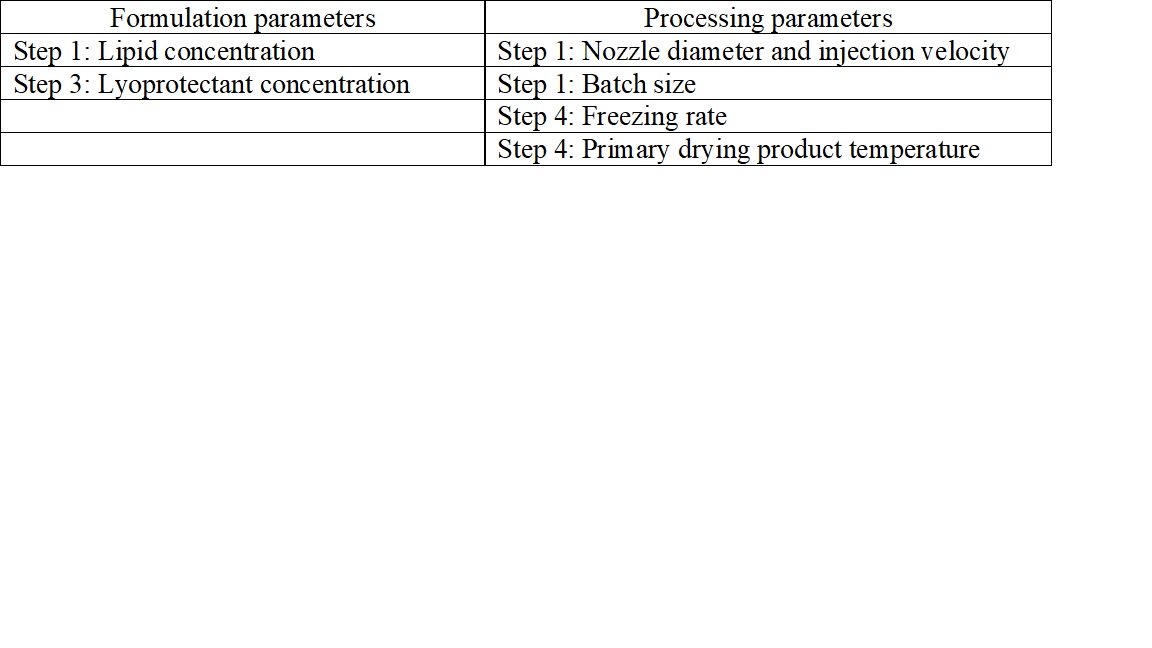