Purpose: Dacarbazine (DAC) is an FDA approved first-line agent used in melanoma chemotherapy. The drug to date is delivered only by the intravenous route owing to its poor solubility, instability, photosensitivity, and cytotoxicity to normal cells. Polyphenols like quercetin (QCT), resveratrol (RES), and curcumin (CUR) have been reported to exhibit anti-melanoma activity. Additionally, they have been reported to increase the sensitivity of melanoma cells to DAC and reduce chemoresistance. The purpose of this study is to determine the synergistic potential of DAC in combination with polyphenols and evaluate nanoparticle-based formulations for their effective delivery via the transdermal route for the treatment of melanoma.

Cell confluence studies of pure DAC and in combination with the selected polyphenols for various concentrations in the ratio of 3:1 were carried out using SKEML-28 cells using Incucyte® to evaluate their synergistic potential. This was done using the (3-(4,5-dimethylthiazol-2-yl)-2,5-diphenultetrazolium bromide) (MTT). Dulbecco’s Modified Eagle Medium (DMEM) with 4.5 g glucose supplemented with 10% fetal bovine serum (FBS) and 1% Penicillin/Streptomycin (P/S). SK-MEL-28 cells were resuspended in the DMEM after harvesting the cells with 0.25% trypsin + 2.2 mM EDTA. After 24 hr of plating, the cells were incubated with serial dilutions of DAC, and DAC-polyphenol solutions using DMSO (0.1% v/v). The plates were further incubated for 90 hr and cell proliferation rate was monitored by analyzing the degree of cell confluency over time. Incucyte® software provided growth curves based on the data points acquired during 24 hr intervals over the 4 days. At the end of 90 hr, the cells were treated with 20 µL of MTT (4 mg/mL) to terminate the reaction and the plates were incubated again for 4 hr at 37ºC. The formazan crystals formed were dissolved in DMSO and absorbance was determined using a SpectraMAX iD3® Multi-mode microplate reader. The IC50 was determined using the Bliss method based on the change in the percentage of viable cells upon addition of chemotherapeutic drugs. Chou-Talalay method was used to evaluate the synergism of the combination by comparison of drug doses with the fraction of tumor cells affected. The data were analyzed using CompuSyn software. PLGA (2% w/v) based nanoparticles (NP’s) (Figure 1) loaded with DAC (15 mg) and polyphenols (15 mg) were prepared using double emulsion solvent evaporation method with PolyVinyl Alcohol (PVA) (1% w/v) as a stabilizing polymer. Particle size and zeta potential of prepared NP’s were carried out before and after lyophilization. Physical characterization of lyophilized NP’s was carried out using XRD and TGA analysis.

Results: The activity of Dacarbazine against the melanoma cells was screened at the concentrations 0.1+0.03 - 60+20 µg/mL for 96 hr. No growth inhibition was observed for the vehicle DMSO used. There was a significant reduction in the cell confluence at the concentrations of 30+10 µg/mL and 60+20 µg/mL from 84.7% to 41% and 35% respectively (P< 0.001) (Figure 2A). Cell confluency studies using SKEML-28 cell line for DAC monotherapy showed an IC50 value of 47.19 ± 2.47 µg/mL and in combination with quercetin, resveratrol, and curcumin the IC50 value decreased to 14.23 ± 1.55 µg/mL, 11.08 ± 2.64 µg/mL and 39.15 ± 2.04 µg/mL respectively indicating the enhanced anti-melanoma effect of DAC when in combination with polyphenols, confirming the effectiveness of combination (Figure 2B). DAC+QCT, DAC+RES, and DAC+CUR NP’s were of the sizes  288.7 ± 3.4 nm, 222.0 ± 3.3 nm, and 233.9 ± 11.7 nm after 24 hr of preparation (Figure 3). The increase in particle size from 0 to 24 hr. was in the range of 2.65-17.6%, indicating that the particles did not aggregate over time and were stable with negative zeta potential values. TGA results of pure DAC showed a sudden weight loss indicating the rapid degradation of DAC around 208 ºC. A similar weight loss was observed in the lyophilized NP’s which confirmed the presence of DAC in the NP’s. Furthermore, the X-Ray Diffraction (XRD) data of pure drugs (DAC, QCT, RES, CUR) and their physical mixtures showed sharp peaks which indicated their crystallinity, and the XRD of the nanoparticle had no sharp diffraction peaks which confirmed the presence of DAC and polyphenols in an amorphous or molecularly dispersed form.

Conclusion: The combination of DAC with polyphenols was found to be effective against SKEML-28 cell line and prepared NP’s using biodegradable PLGA based system have significant potential for the prevention and treatment of melanoma. PLGA NP’s within the desired size range were prepared and their physical stability was confirmed by TGA and XRD studies. Furthermore, optimum drug release and enhanced anti-melanoma activity of DAC and polyphenol combination is expected from the NP’s due to their smaller size and increased surface area. 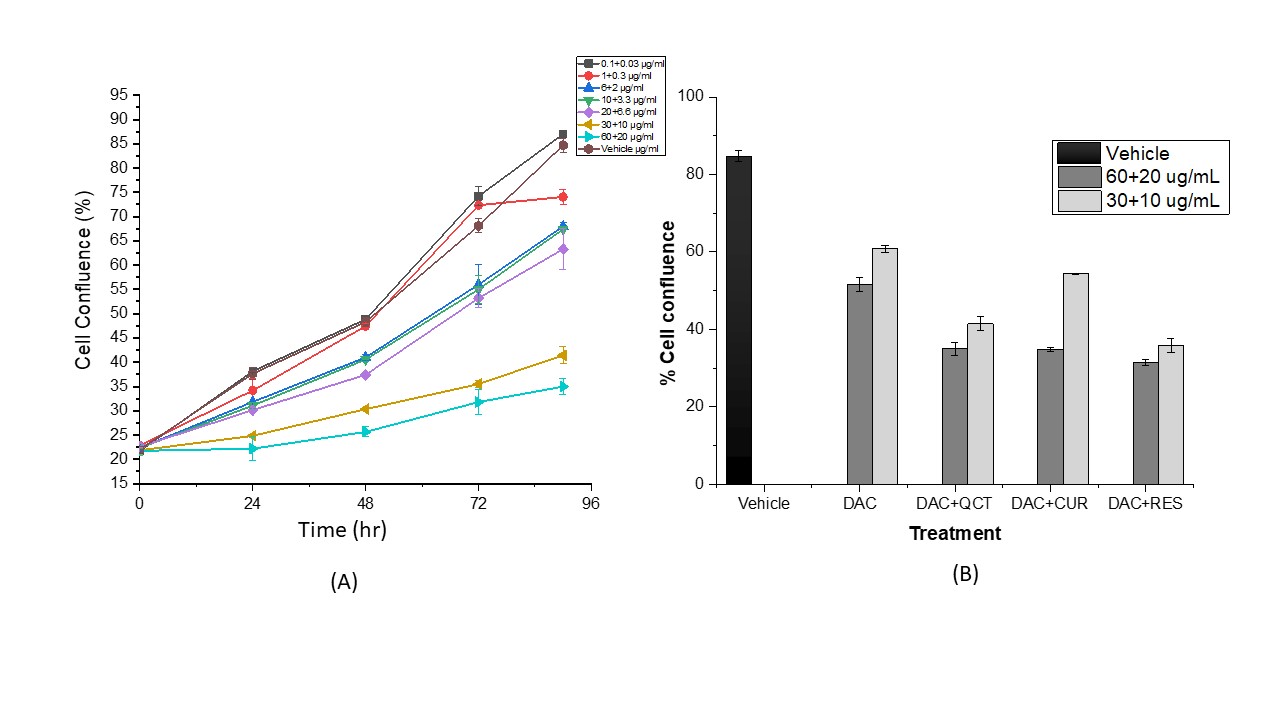 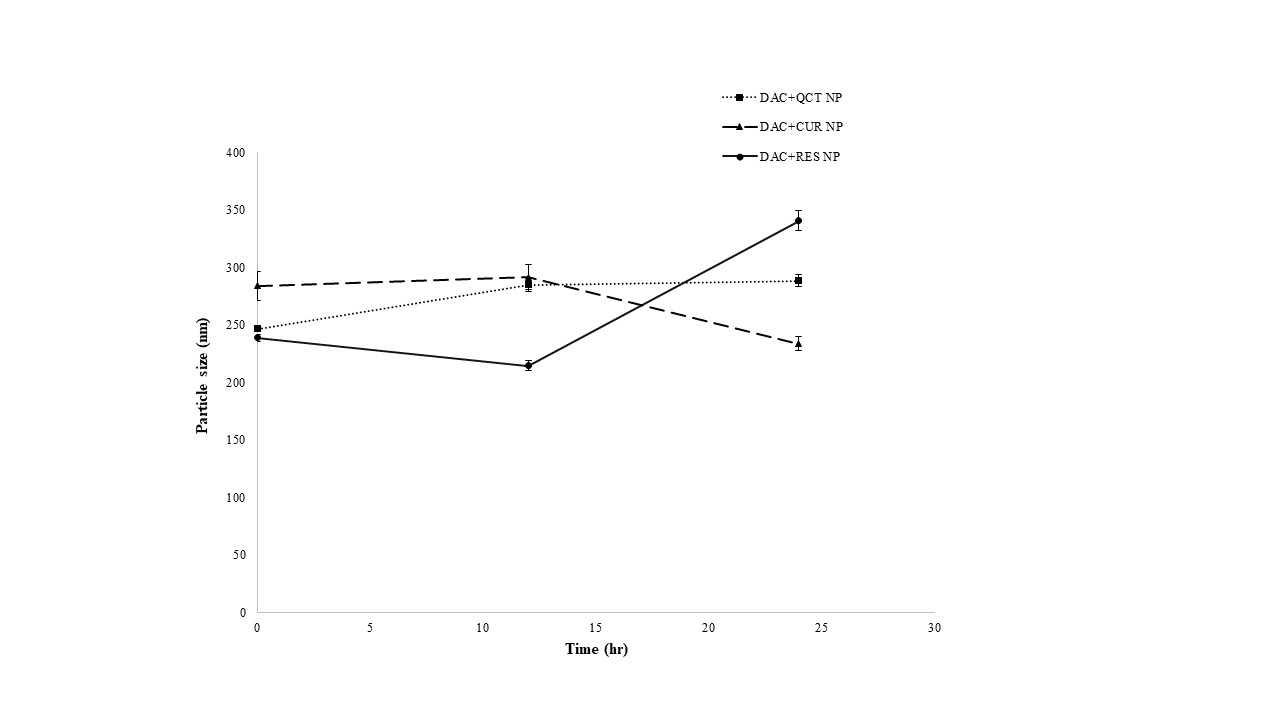