Purpose: Mycobaterium avium complex (MAC) lung disease is a serious condition, that in some cases can cause severe, even permanent damage to the lungs. MAC is the most common form of nontuberculous mycobacteria (NTM)1. Amikacin is a polycationic, semisynthetic, bactericidal aminoglyocoside. The entry of the moiety is mediated by binding of the antibacterial moiety to the negatively charged components of the bacterial cell wall. The primary mechanism of action involves the disruption and inhibition of protein synthesis in the target bacteria by binding to the 30S ribosomomal subunit. Arikayce® approved by FDA in 2018 and generic of Arikayce® is not available at the moment. Due to the complex NLs dosage form, the development of generics takes a longer time compared to the conventional dosage form. The aim is to develop and characterize the Amikacin (Amk) loaded extended release nanoliposomes (NLs) by ethanol injection method.

Methods: Amk-NLs preparation and analysis: We have developed the Amk-NLs with the composition similar to the marketed product (Arikayce®) for inhalation delivery. The lipid materials (DPPC (17.29 mg) and Cholesterol (6.85 mg)) were dissolved in 1.3 ml ethanol and Amk (50mg) was dissolved in the 20.0ml of 0.9% NaCl solution prepared in milli Q water. Both organic and aqueous solutions were maintained at 50oC. The ethanolic solution was injected (0.15 ml/min) in the aqueous solution using a syringe pump at 600 rpm mixing speed at 50oC. The formed liposome suspension mixed at 600 rpm for 30min while maintaining the temperature at 50oC. The liposome suspension was subjected to extrusion through a mini extruder passing three times using 0.1µm Whatman filter to yield smaller particle size. The NLs were analysed for their particle size, polydispersity index (PDI) and zeta potential using Malvern Zetasizer. The unentrapped Amk was analyzed using UHPLC method hyphenated with evaporative light scattering detector (ESLD).
Entrapment efficiency: Centrifugation of Nano-liposomes (0.5ml) was performed by using Amicon ultra filters (10kDa) at 13000 rpm for 15min. The eluent was analyzed for Amikacin content by UHPLC-ELSD method.

Results: The NLs suspension was found to have the size of 386 ± 25 nm, zeta potential of 1.08 ± 0.95 mV, and PDI of 0.32 ± 0.03.  After subjecting the liposome suspension through the extrusion process using a mini extruder, NLs of 215.26 ± 0.49 nm and PDI of 0.43 ± 0.02 were produced. Arikayce® from Insmed comprises of NLs of about 200 to 400 nm2. The developed Amk-NLs have size profile within the range of commercial Arikayce® NLs. The quantity of unentrapped Amk, before extrusion was around 42% and after extrusion it came down to 37%. The stability, release and aerodynamic property determination are in progress.

Conclusion: The Amikacin loaded nanolipsomes were successfully formulated with characteristics similar to Arikayce®  with particle size range of less than 300nm. 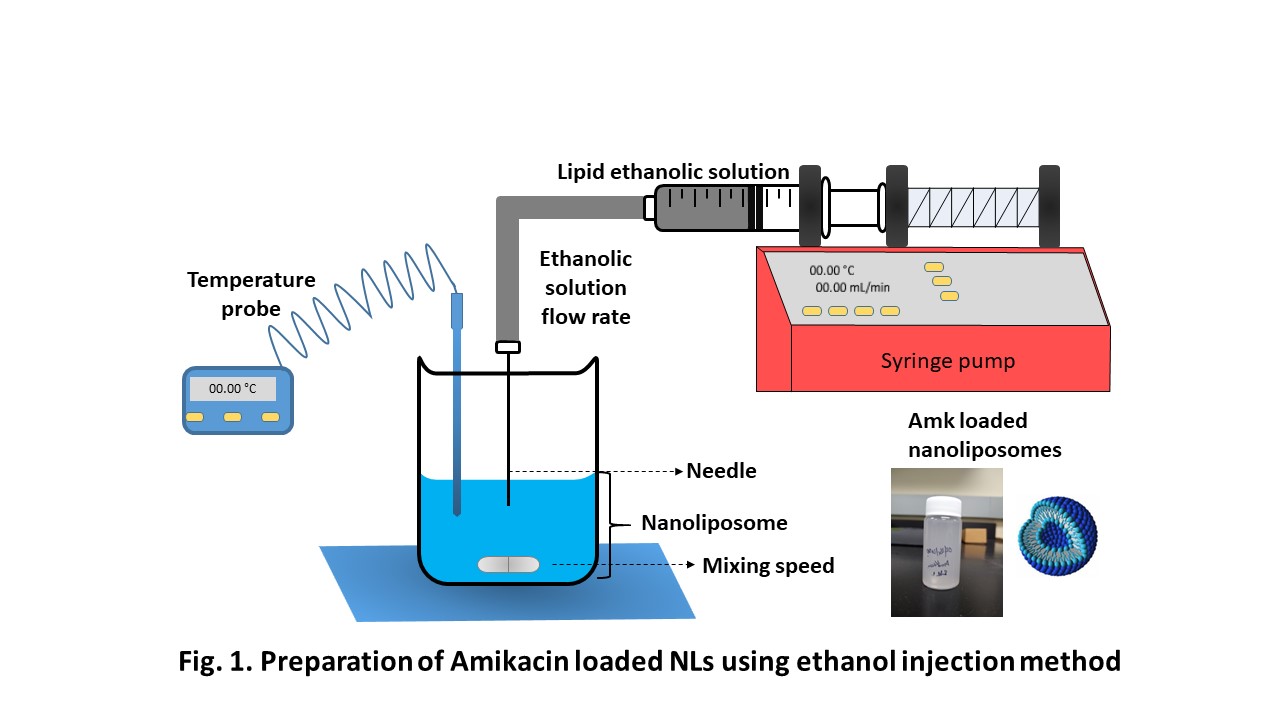