Where Does Drug Degrade during Twin-Screw Melt Granulation?

Purpose: Twin-screw melt granulation (TSMG) offers many advantages over traditional batch melt granulation. However, the major technical challenge of TSMG is the process-induced transformation of drug substances as the result of elevated mechanical and thermal stresses during processing. There is a lack of understanding of the mechanisms for these physicochemical changes during TSMG. Twin-screw extruder is generally treated as a black box and only global effect of processing parameters on granule properties is investigated. The first objective of this study is to investigate the process-induced transformation of drug substances at different sections along the screw profile and after exiting the barrel. The second objective is to correlate extrusion parameters (e.g. feed rate and screw speed), system parameters (e.g. residence time, granule temperature, and specific mechanical energy) to drug degradation.

Methods: Binary mixture containing 20% hydroxypropyl cellulose (KlucelTM EF grade) and 80% GLZ was processed using a Leistritz Micro 18 extruder with a 25 L/D barrel configuration. P-toluenesulfonamide (TSA), the primary degradant of GLZ, was analyzed using a reversed-phase HPLC method. Three screw designs with different types of mixing elements (30° forward kneading, neutral kneading, and reverse comb mixer) were used to investigate the impact of these screw elements on GLZ degradation. Mixing element was positioned at 5 D from the barrel outlet. The profile of GLZ degradant content along the axial direction was determined. Mixing element was placed at different positions to delineate the impurity generated at the mixing element vs. in the conveying section post mixing element.

Results: Except for the forward comb mixer, granules were prepared with the other three mixing elements. Both the granule formation and GLZ impurity generation were initiated at the mixing element. The degradation level was at 0.13, 0.19 and 4.67% with 30° forward kneading, neutral kneading, and reverse combing element, respectively. By studying the effect of 30° kneading element position, we concluded that 2/3 of the impurity was generated at the kneading section while the remaining 1/3 was generated in the conveying section post kneading. Quenching the discharged granules with liquid nitrogen reduced the degradant level from 0.13% to 0.08%. This indicated the significant drug degradation during the cooling at ambient condition. At a given screw speed, the impurity level was inversely correlated with the feed rate. At higher feed rate, specific mechanical energy was lower and residence time was shorter. As a result, the formulation was exposed to lower temperature for a shorter period of time. Therefore, the degradant level was lower. At a given feed rate, there was a lack of clear correlation between impurity level and screw speed. Screw speed related positively to the granule temperature but negatively to the residence time. The overall effect of screw speed at a given feed rate depends on which one of these two opposing effects was more dominant.

Conclusion: GLZ degradation is predominately controlled by the granule temperature and residence time inside the extruder barrel. In addition, significant degradant was generated in both the conveying section post kneading and during the cooling at ambient conditions post barrel exit. Screw profile, extrusion parameters, and granule cooling condition must be optimized in order to minimize drug degradation during TSMG. 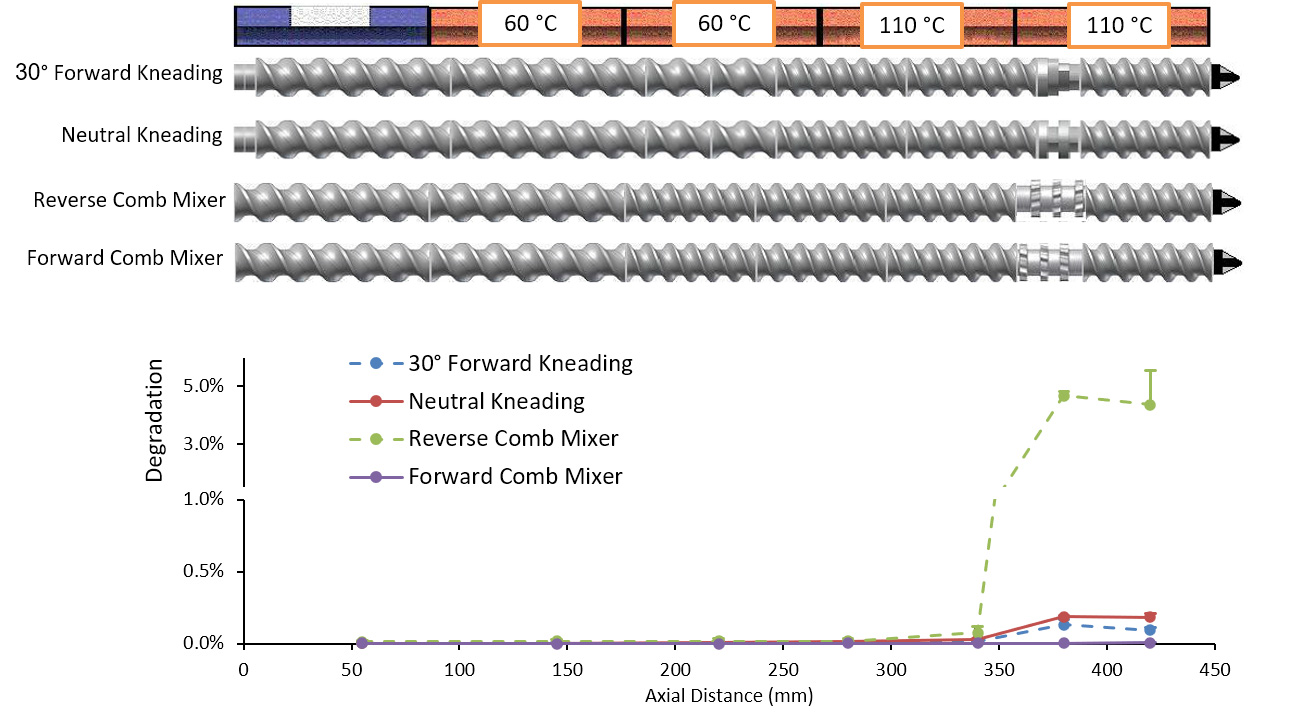