Purpose: A bioanalytical ligand binding assay (LBA) to quantify a therapeutic antibody was developed and validated in normal healthy human serum (NHS). The therapeutic is a bispecific antibody directed against two distinct targets, Target A and Target B (Figure 1A). During method validation, acceptable dilutional linearity was observed in fortified NHS. However, post-validation, it was discovered that some patient samples quantitated at higher concentrations of the therapeutic when analyzed at dilutions greater than the assay minimum required dilution (MRD) than the same patient samples analyzed at the MRD.  It is hypothesized that a matrix component, such as elevated soluble target levels, may be interfering, resulting in under-recovery of the therapeutic (Figure 1C). In the patient population, soluble Target B (sT-B) has been shown to be elevated compared to NHS. Further complicating the problem, the concentration of sT-B can vary widely between individuals and even within individuals as treatment or the disease progresses. This leads to unpredictable recovery of the therapeutic from patient samples. An assay should exhibit sensitivity and specificity, per FDA guidelines. Therefore, re-development of the assay to quantify the bispecific was necessary in order to accurately report therapeutic levels in patient samples. The goals were to maintain or increase assay sensitivity while also reducing interference by sT-B.

Methods: The method uses a biotinylated anti-Arm-A capture antibody paired with a ruthenylated anti-Arm-B detection antibody, in a stepwise assay format (Figure 1B). Briefly, MSD-SA plates are coated with the biotinylated capture reagent, diluted samples are added, and then the ruthenylated detection reagent is added, washing the plate between each of the steps. To test if sT-B was interfering with the ability of the ruthenylated detection reagent to bind to the therapeutic, patient samples were simulated by fortifying NHS with varying levels of soluble Target B. Quality controls (QCs) were prepared at a level approximating the middle of the calibration range in NHS without sT-B (sT-B-, control), and with low- (sT-B+) and high- (sT-B++) level sT-B. Various strategies were examined to determine the effect on sT-B interference and under-recovery of therapeutic in sT-B+ and sT-B++ matrix, including: adding non-ionic detergent to the assay buffer, increasing the detection incubation time, and acid dissociation followed by neutralization with either excess detection reagent or a scavenger anti-sT-B antibody.

Conclusion: Acid dissociation followed by neutralization including a scavenger anti-sT-B antibody worked well to mitigate the interference observed in NHS with both low- and high-levels of sT-B, however the variability introduced into the assay was unacceptable in terms of accuracy and precision. Therefore, it appears that manipulation of buffers and incubation times is a more robust strategy for reducing the interference of sT-B in the quantitation of the bispecific therapeutic. 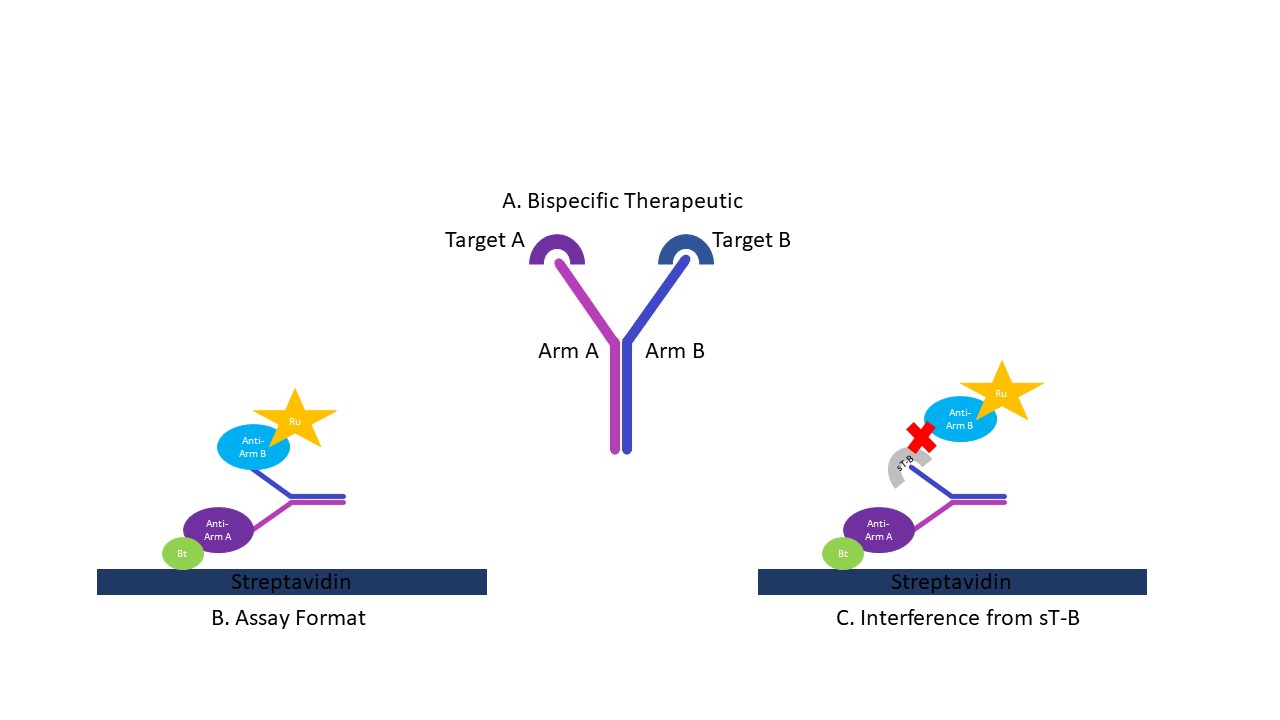 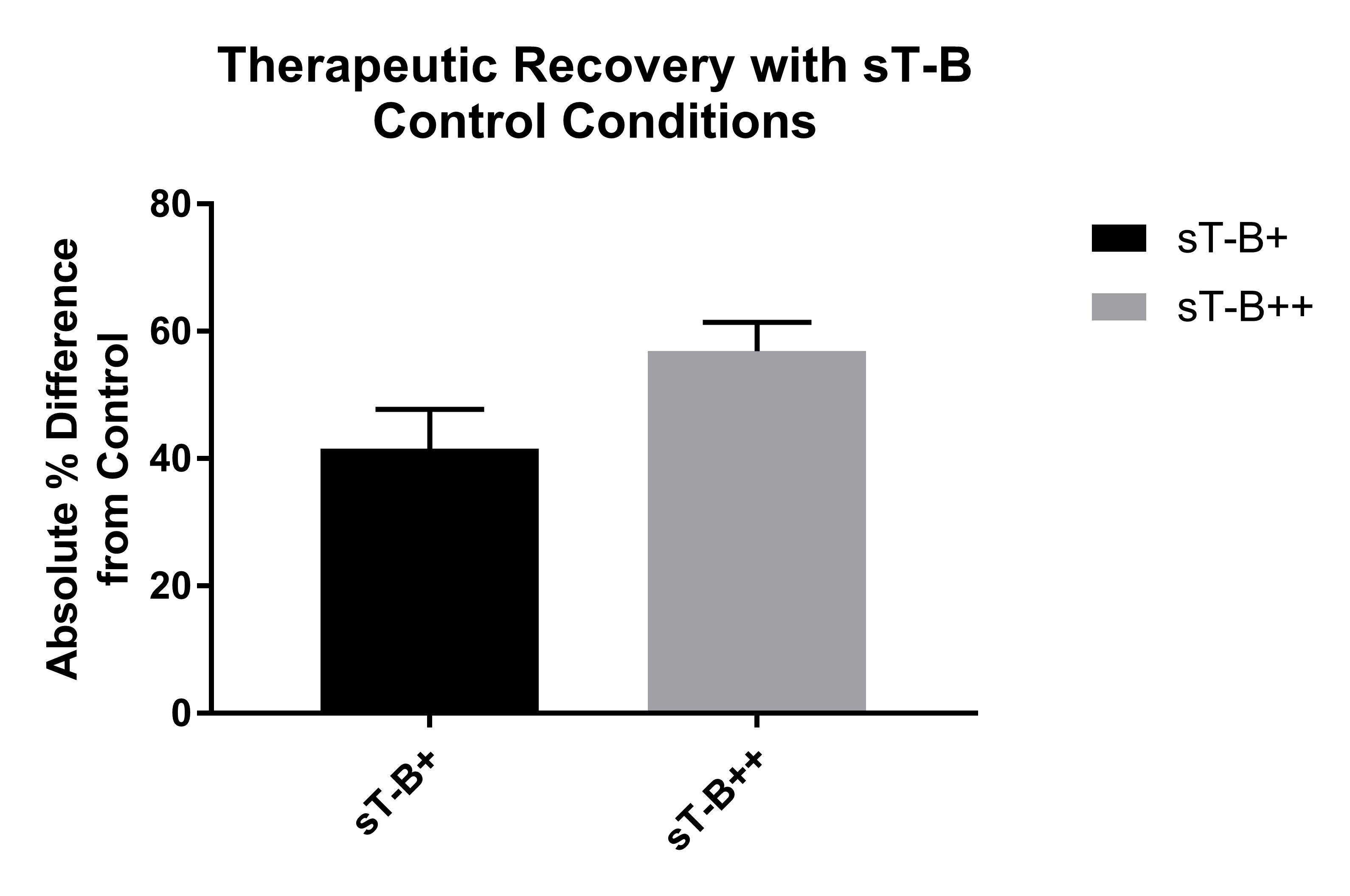 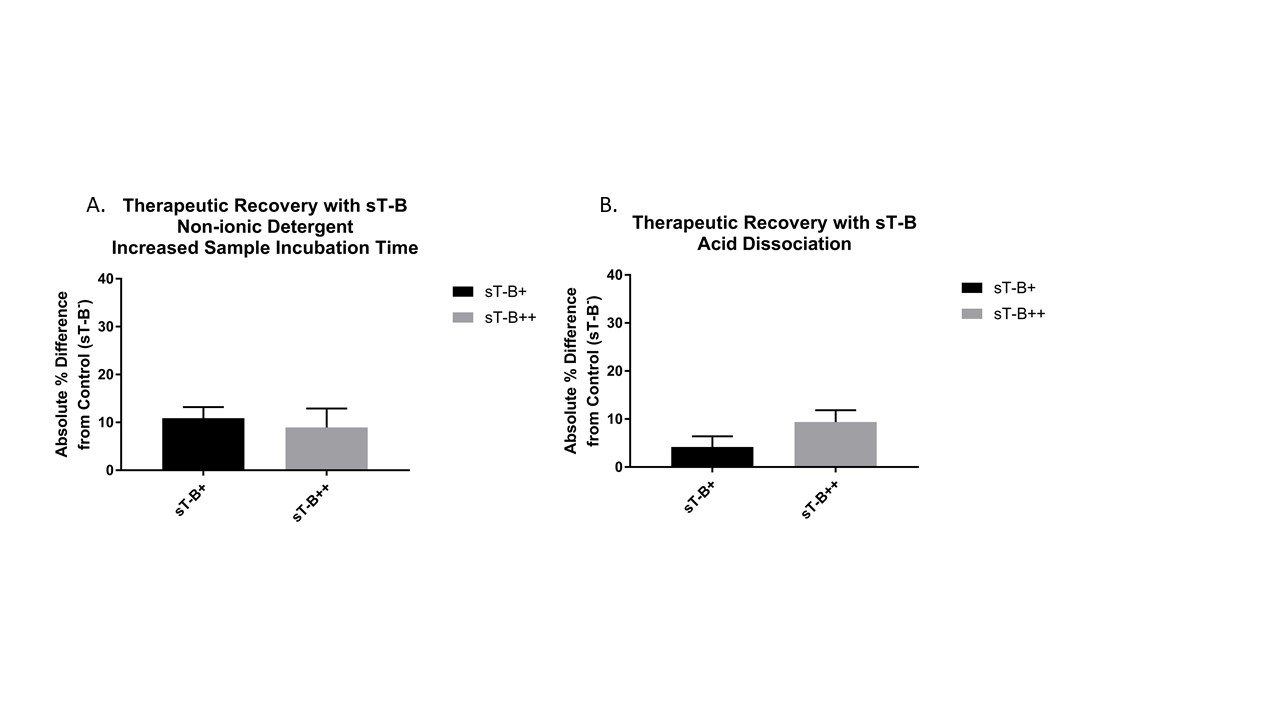