Purpose: Clofazimine (CFZ) is a weakly basic, highly lipophilic drug known to have an increasing elimination half-life when dosing is prolonged. This shows the need to model with nonlinear Pharmacokinetics (PK), namely by imposing a function with an upper limit for the Volume of Distribution (Vd). These functions make S-shaped, or sigmoid curves that increase rapidly followed by leveling at an upper limit as an estimation of the internal phase transition for the drug. For this study, population pharmacokinetics (PopPK) were used to model the CFZ concentration/time profiles for 3 mice.

This study intends to examine whether sigmoid functions accurately describe the Vd of CFZ. Further, it intends to discover if different sigmoid curves for Vd have differing accuracy in modeling the PK of CFZ, and if so which is best.

Methods: The Nonlinear Mixed Effects Modeling software NONMEM was used to calculate the variable PK parameters for a population of CFZ-treated mice, according to different equations for a variable Vd and using a two-compartment model of blood serum and spleen.The software generated concentration-time profiles for each mouse and each compartment based on the estimated PK profile. An Objective Function Value (OFV), or a measure of model error, and the R^2 value of predicted concentration against real concentration was generated for each run.

Results: An rational square root sigmoid 𝑉𝑑(𝑡)=𝐵1(𝑡−𝐵2)/(2√(𝐵3+(𝑡−𝐵2)^2))+𝐵2/2 with free parameters B1, B2, B3 and time variable t yielded the lowest OFV of 206.600 for the compartmental model, compared to linear equations and three other sigmoidal curves. Its R^2 value of 0.97 was the highest of the tested functions as well, implying high accuracy for predicting real concentrations of CFZ in mice. It vastly outperformed a linear model in its ability to predict the concentration-time profile of CFZ in the mice, and significantly outperformed the other equations as well.

Conclusion: The PopPK of drugs with an accumulating character, or that undergo a phase transition, can be better modeled with variable PK parameters. In particular, S-curves such as the rational square root sigmoid are able to describe the Vd of CFZ. 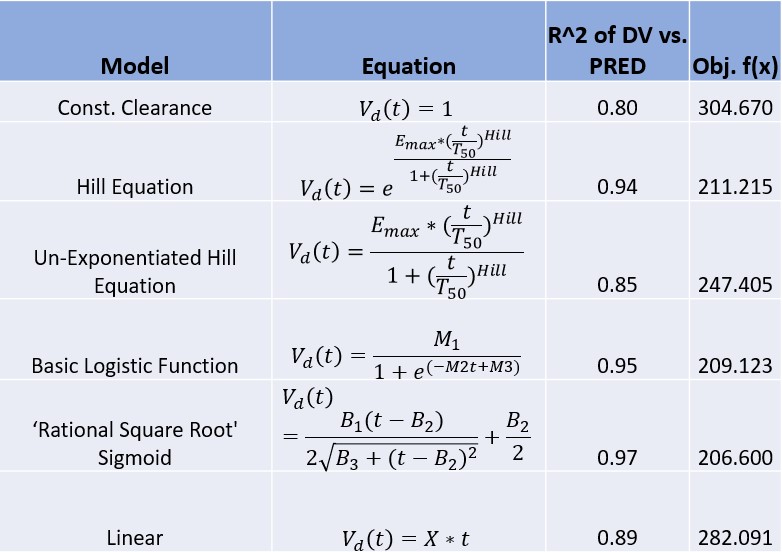