Purpose: Matrine (Matr) was identified as a key active component of Antitumor B (ATB). ATB, also known as Zeng Sheng Ping, is a Chinese herbal mixture composed of six plants. Recent in vitro, in vivo and clinical studies showed that ATB is active against oral cancer. However, little information has been known about the pharmacokinetics of Matr in human. Therefore, the aim of this study is to develope a PBPK model and characterize the pharmacokinetics profile of Matr in healthy adults.

Methods: An open-label PK study of ATB 2400 mg single dose was conducted on 8 healthy adults to investigate the safety and PK of ATB compounds in healthy adults. The study was approved by the IRB of University of Houston, Texas, USA. Each participant took 8 ATB tablets of 300 mg each with 250 mL water after overnight fasting. Plasma and saliva samples were collected pre-dosing, 0.5, 1, 2, 3, 4, 6, 8 and 24 hrs post dosing. The GastroPlus® 9.7 (Simulations Plus, Inc., Lancaster, CA) Advanced Compartmental Absorption and Transit (ACAT™) model was used in conjunction with the PBPKPlus™ modules to build a mechanistic absorption/PBPK model for matrine. Human organ weights, volumes, and blood perfusion rates were generated by the Population Estimates for Age-Related (PEAR™) Physiology™ module. Physicochemical and biopharmaceutical inputs were either obtained from literature or predicted by ADMET Predictor™ 9.5.

Results: ATB was found to be safe, there was no serious adverse effect reported after a single dose of 2400 mg on 8 healthy adults. Matrine was detected as quantifiable concentrations in human plasma and saliva. Significant higher concentration of Matr in the saliva sample suggested an active secrection of this compound to saliva. A mechanistic absorption and PBPK model of voriconazole was developed in GastroPlus® 9.7 (Simulations Plus, Inc.). All tissues were modeled as perfusion-limited tissues. Tissue/plasma partition coefficients (Kps) of perfusion- and permeability-limited tissues were calculated using the default Lukacova [2] and Poulin and Theil extracellular [3] methods, respectively. In addition, renal excretion was modeled by passive renal filtration estimated from GFR and fraction unbound in plasma (FupxGFR) and passive as well as carrier-mediated renal secretion. The PBPK model adequately described Cp-time profiles of matrine after p.o. administration in 8 healthy adults. The developed PBPK model adequately captured the observed Matr Cp time profile following oral administration under fasted state in healthy subjects.

Conclusion: The mechanistic absorption and PK of voriconazole were adequately described using physiological and drug-specific parameters. The model successfully captured the dose and time-dependent PK of Matr in human plasma. This model can be utilized for quantitative prediction of matrine concentration in plasma on other dosage administration. This study demonstrates the utility of PBPK modeling to explore the mechanisms of drug disposition and pharmacokinetics. The absorption and pharmacokinetics of rosuvastatin were accurately captured by the model. This model can be extended for quantitative prediction of the different different dosages on PK profile of Matr. Pharmacokinetics of Matrine could be tracked with saliva sampling. 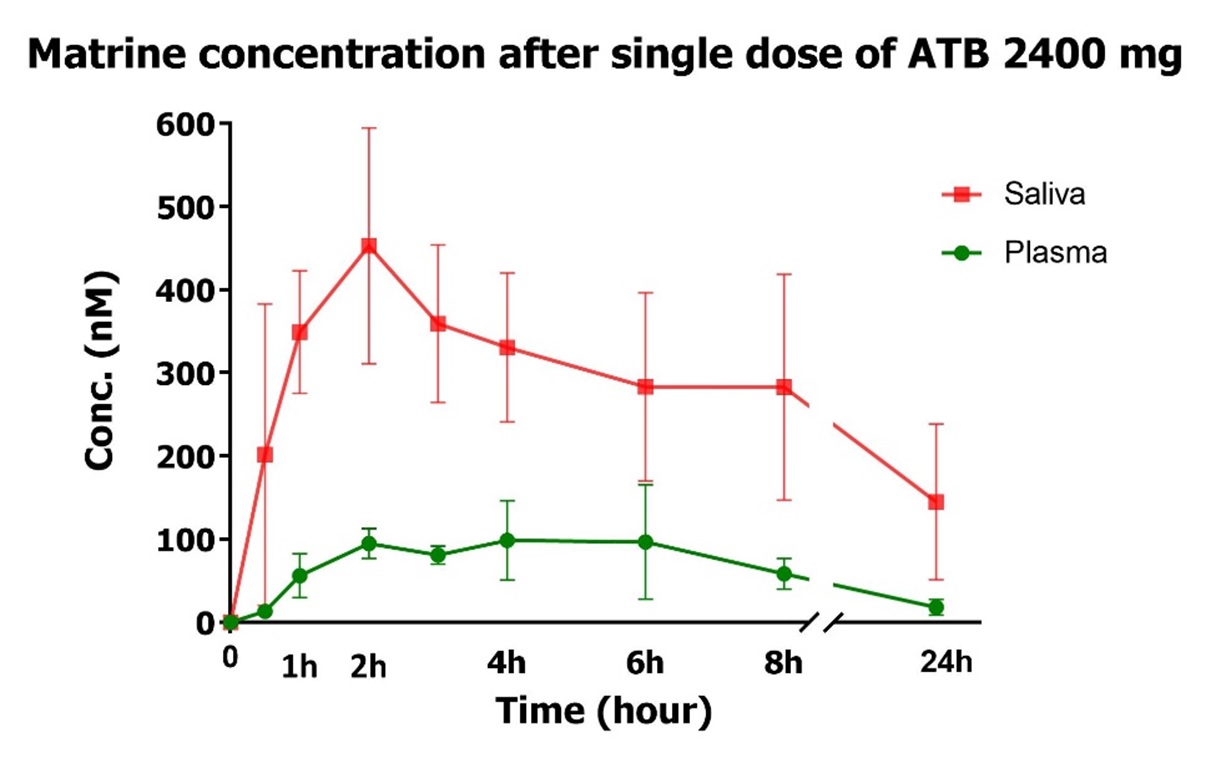