Purpose: Doxorubicin HCl (Dox) is anthracycline antibiotic which exerts antineoplastic activity against numerous human cancers, such as ovarian cancer, acute leukemia, non-Hodgkin’s lymphoma and Kaposi sarcoma etc1. It acts by intercalating between base pairs in DNA which prevents DNA replication and results in inhibition of protein synthesis. DoxilÒ is approved in 1995 and it contains Dox, encapsulated in STEALTHâ nanoliposomes (NLs) for intravenous administration. Different methods are available to formulate NLs. The aim is to develop and test the Dox loaded PEGylated (peg) NLs using industrially applicable ethanol injection method. As compared to other formulation methods, the ethanol injection method offers several advantages such as it is easy to scale up, rapid, form small size NLs with narrow size distribution, and this method doesn’t cause lipid degradation and oxidative alterations2.

Methods: The scalable ethanol injection method was used to prepare Dox-pegNLs (Fig.1).  The 191.6 mg of DPPC, 63.8 mg of cholesterol (Chol) and 63.8 mg of mPEG-2000-DSPE were dissolved in ethanol(90%) with constant stirring at 600 rpm maintaining the temperature of the mixture at 65oC using digital magnetic stirrer plate. Aqueous 250mM ammonium sulfate was prepared in water for injection. The lipid mixture was slowly injected at a rate of 1ml/min into the ammonium sulphate solution with constant stirring of 600rpm. The formed liposome suspension stirred for 30min at 600 rpm while maintaining the temperature at 65oC. The liposome suspension subjected to extrusion process through a mini-extruder for 5 times passed through 0.1mm Whatman filter followed by 5 times passed through 0.05mm Whatman filter while maintaining the temperature maintained at 65oC. After obtaining particle size in the range of 80nm to 100nm, drug loading was determined. In active drug loading step, Dox was dissolved in 10% sucrose solution and temperature maintained at 60oC. Sufficient amount of histidine (10mM) was added to the drug solution and added it to the NLs suspension and maintained temperature at 60oC for 25 min. The liposomes cooled to a temperture of 2 to 8oC and incubated for an hour. The 10 %w/v sucrose solution was used to made up the volume. Finally, pH was adjusted to 6.65 using NaOH/HCl. Dox-pegNLs (2ml) was centrifuzed using Amicon ultra filters (10kDa) at 13000 rpm for 15min. The eluent was collected and analyzed for Dox concentration by using Fluorescence spectrometry (BioTek SYNERGY H1 Multiplate reader). Calorimetry studies were carried out using a calibrated DSC (Q200; TA Instruments, New Castle, DE). Approximately 4 mg of DPPC or Chol samples, “as is” and dried, were weighed into an open aluminum pan or an aluminum pan that was subsequently nonhermetically crimped closed. The sample weighing and crimping were carried out in a nitrogen glove box. DSC studies were performed by heating the samples at 8oC/min from -40oC to 250oC. Nitrogen was used as the purge gas with a flow rate of 40 mL/min.

Results: The developed Dox-pegNLs showed particle size in the range of 80nm to 100nm (90.35nm ± 0.21), PDI of 0.05±0.01, zeta potential of +3.38mV±12.97. Entrapment efficiency is close to 90%, which shows that ethanol injection method results in high entrapment of Dox. The release and stability studies are in progress. It is expected that the developed Dox-pegNLs are stable under media mimicking physiological envornment and show sustained release of loaded Dox.  The Tm of DPPC was 61.29o, Chol Tm was ~36.25oC. For NLs formulations, DSC study is ongoing.

Conclusion: Dox-pegNLs were produced with required particle size range of 80nm to 100nm and PDI of 0.05±0.01 with high entrapment efficiency. Future work: Further in vitro and in vivo studies are needed to evaluate the performance of developed Dox-pegNLs. 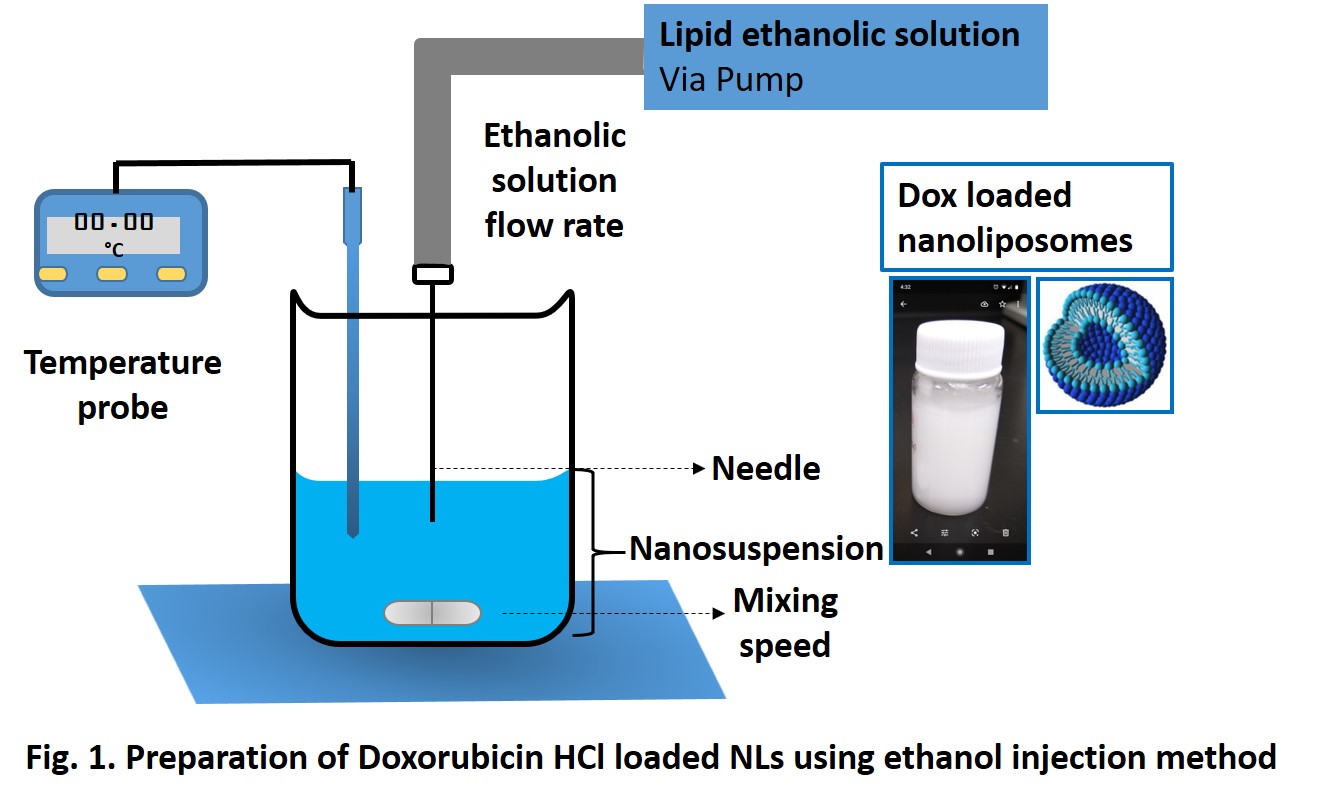