Purpose: Prescription opioids are the drugs of choice for abuse to increase euphoric effect (e.g., feeling intense excitement and happiness). Recently, several dosage forms are being developed meant to decrease abuse potential of opioid medications by preventing physical (e.g., crushing, chewing of tablets) and chemical (e.g., drug extraction from tablets) tampering by incorporating different excipients that could provide physical and/or chemical barriers. However, limited research has been done to minimize oral multiple unit abuse. The purpose of this study was to determine effect of alkalizing agent on in-vitro drug release from oral multiple-unit abuse of bilayer tablets formulated with various model drugs.

Methods: Propranolol HCl (pKa 9.5), quinidine sulfate (pKa 8.5), and dipyridamole (pKa 6.4) were selected as model drugs due to their similar pKa value to that of different opioids. Screening of alkalizing agent: Bilayer abuse-deterrent extended-release tablets (ADERT) with propranolol HCl were prepared to screen type of alkalizing agent (Table 1). Since bilayer ADERT has pH modifying layer that disintegrates rapidly and quickly raises bulk media pH during the drug release studies, pH of the medium in the dissolution vessel was measured at predetermined time points using pH meter. Two-stage bio-relevant in-vitro drug release method, which represents gastrointestinal transfer was used. The studies were performed using the USP 2 dissolution apparatus (rotating paddle) with paddle speed of 100 rpm. The dissolution medium, at 37 °C ± 0.5 °C, was 250 mL FaSSGF (pH 1.6) for first two hours and, subsequently, 250 mL 2×FaSSIF (fasted state simulated intestinal fluid, double concentrated, pH 6.5) was added to end up with a final volume of 500 mL (adjusted to 6.5 using 10 M NaOH solution) for additional 22 hours of drug release studies. Sample (1 mL) was collected at predetermined time points and replaced with equal volume and drug content was analyzed by HPLC method.
Effect of alkalizing agent on in-vitro drug release from oral multiple-unit abuse: In order to minimize drug release upon multiple-unit ingestion (3- or 5-tablet) in both FaSSGF and FaSSIF, additional alkalizing agent (i.e., magnesium hydroxide) was incorporated in extended-release layer (Table 2). Therefore, not only the microenvironmental pH (pH at diffusion layer surface of tablets) but also the pH in bulk media could be raised. The increased pH might lead to decreased solubility of weakly basic drug and thereby drug release could be reduced.

Results: Screening of alkalizing agent: Magnesium hydroxide was selected as an alkalizing agent for further studies, since it shifts pH of media from acidic (pH 1.6) to alkaline (pH 9.2) form drug release studies in FaSSGF as compared to that of aluminum hydroxide, calcium carbonate, and calcium hydroxide. Effect of alkalizing agent on in-vitro drug release from oral multiple-unit abuse: As shown in Figure 1, similar propranolol HCl release profiles were observed from single-unit of bilayer ADERT (formulations P25, P50, and P75) as compared to that of single-unit control formulations. However, there was significant reduction in propranolol HCl release profiles from multiple-unit (3- and 5-tablets) of formulations P25, P50, and P75 as compared to that of multiple-unit of control formulations. In addition, from Figure 2A, it was observed that with increase in the concentration of magnesium hydroxide in the extended release layer, the amount of propranolol HCl released at 2 hours in FaSSGF was decreased as compared to that of control formulations. Similar results were observed at additional 22 hours in FaSSIF (Figure 2B). This reduction in the drug release was due to an increase in microenvironmental pH. When 5 units of ADERT were studied, the values of microenvironmental pH were 8, 8.4, and 9 for formulations P25, P50, and P75, respectively, in both FaSSGF and FaSSIF. In term of pH in bulk media, the values of pH were 9.3, 9.35, and 9.4, respectively, from formulations P25, P50, and P75 in FaSSGF at 2 hours and 8.6, 8.8, and 9.2 in FaSSIF at additional 22 hours. The changes of pH led to reduction in solubility of drug (< 1 mg/mL above pH 8.7) and thereby amount of drug released from the various ADERT formulations were reduced. Thus, consuming multiple-unit ADERT of formulations P25, P50, and P75 formulated with an opioid drug lhaving pKa of 9.5 (like propranolol) might lead to a reduction in euphoric effect of opioid drug.

Conclusion: In the current investigation, magnesium hydroxide was selected as alkalizing agent which was incorporated not only in fast disintegrating but also extended release layers of bilayer ADERT. A significant reduction in drug release from oral multiple-unit of ADERT was observed as compared to that of control formulation indicating that bilayer ADERT approach has potential to minimize oral multiple-unit abuse. 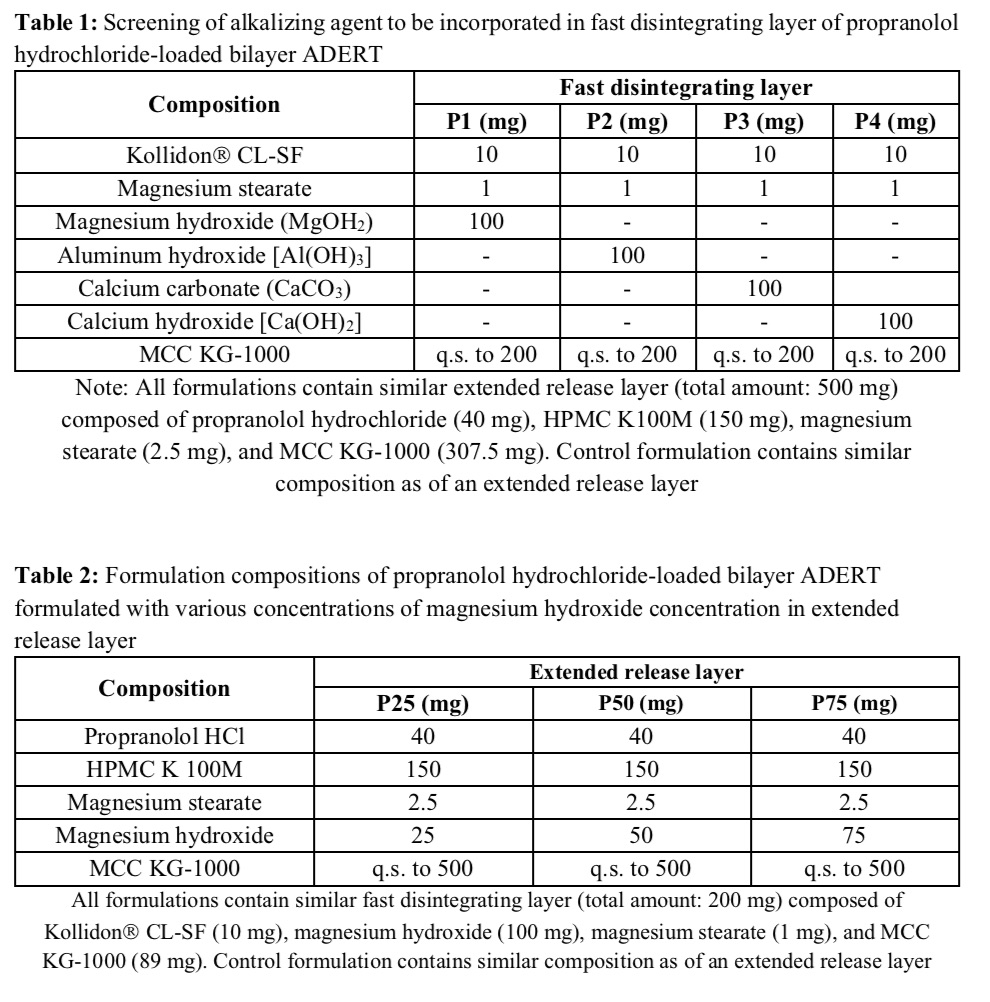 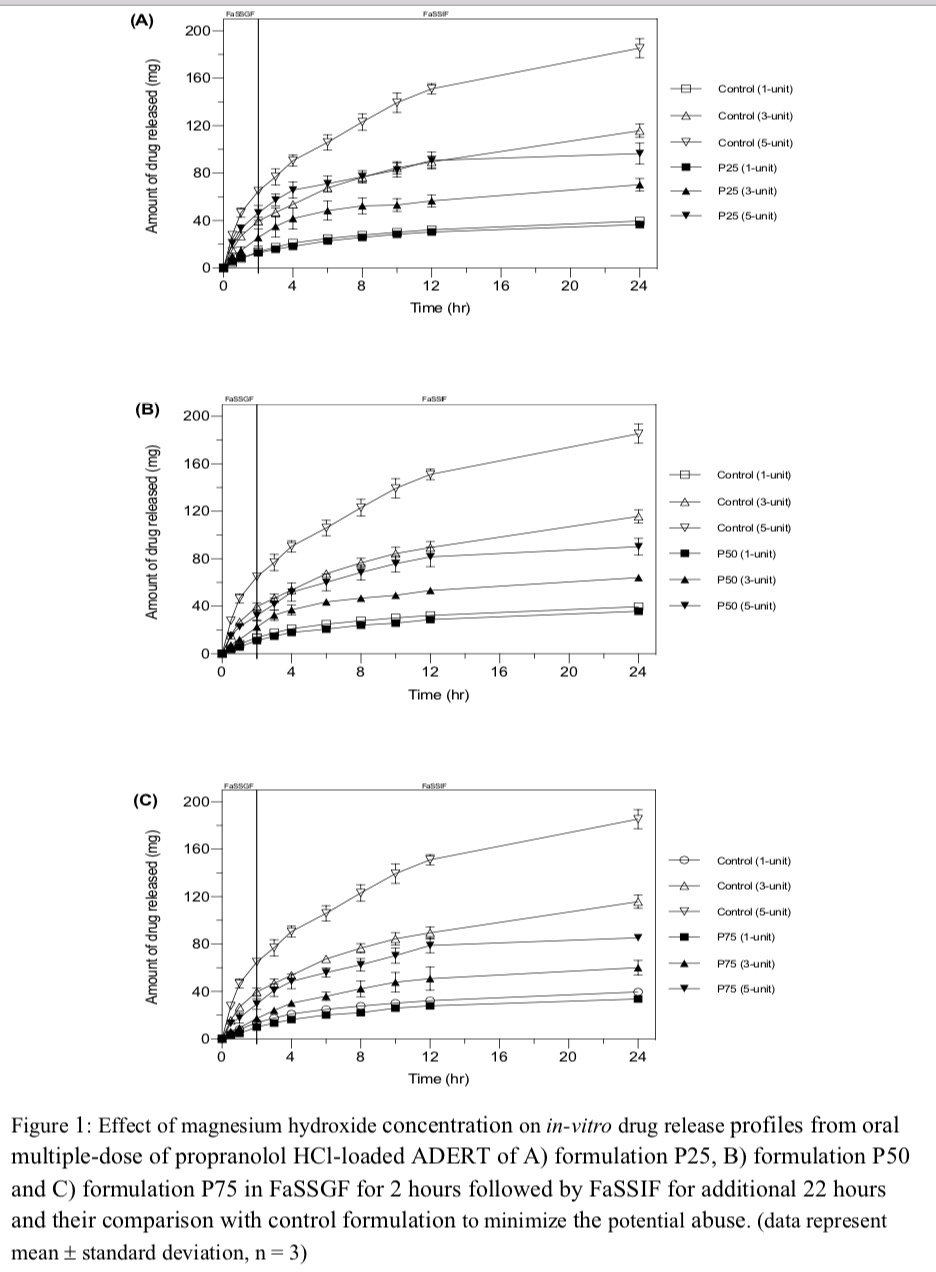 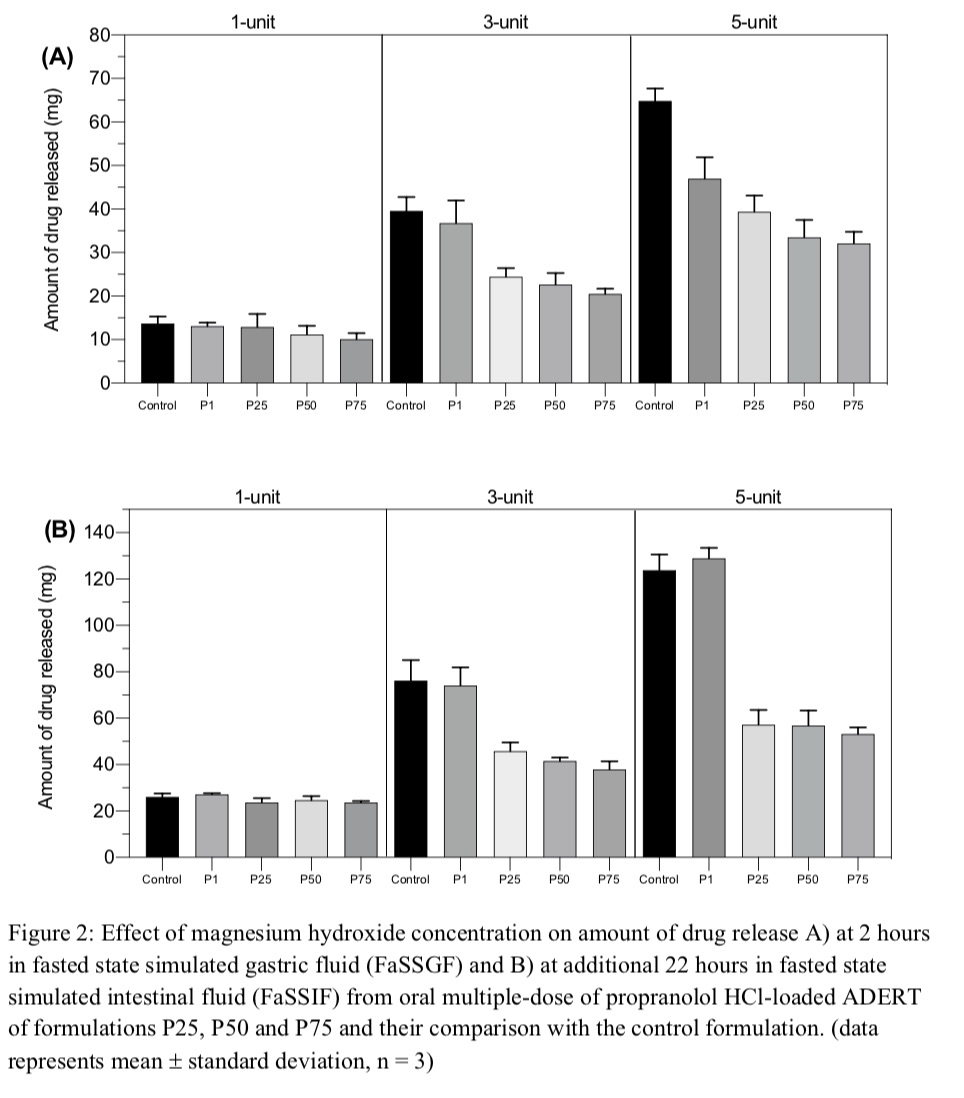