Purpose: The development of sustained-release formulations for drugs administered via the vaginal route has the potential to increase treatment efficiency and patient compliance. One promising strategy to formulate such dosage forms is the incorporation of microparticles into a bio-adhesive gel. The main aim of this study was to assess feasibility of formulating matrix microparticles using lipid-based carrier systems, namely, SyncrowaxTM HGLC or Gelucire® 50/13 (G-50/13), with Avicel® PH-101 (MCC) or hypromellose K100M used as diluents. Model drugs chosen for the study included azidothymidine (AZT) and metronidazole (MTZ), respectively.

Results: Microparticles were successfully prepared with TS HME using conditions intended to minimize the effect on particle size reduction of the model drug powders (conveying elements only; 20 rpm) and to maintain full crystallinity of the drug (not more than 62℃). In the processing range (up to 90℃), model drugs AZT (Tm 110℃) and MTZ (Tm 152℃) did not dissolve in excipients (PLHSM and DSC), while at significantly elevated temperatures (90 to 190℃) demonstrated dissolution of AZT in G-50/13 (Tm 33℃) as well as MTZ and AZT in HPMC (Tg 57℃) (Fig. 1). Moreover, PLHSM observation revealed the development of the cracks during the cooling down of lipid-based formulations (Fig. 2). Investigation of placebo formulations with WU/WL test allowed excluding from the experimental plan formulations with SyncrowaxTM HGLC (hydrophobic insoluble lipid, Tm 48℃) concentration lower than 80% w/w because of fast water uptake due to hydrophilic excipients and high weight loss due to the erosion. Drug release from particles (approx. 2.2x3 mm) prepared from extrudates was investigated as a function of drug loading and diluent type (Fig. 3). Particles without diluent at 20 % w/w drug load demonstrated slow and incomplete release (Fig. 3A), that can be explained with percolation threshold. Introduction of hydrophilic diluents (10% w/w) allowed to significantly increase drug release rate. In accordance with Lapidus-Lordi equation [1], the increase surface area to volume ratio is increasing drug release rate, so preparing sustained release microparticles with additional particle size reduction can be considered.

Conclusion: The number of drug-loaded formulations was successfully reduced due to the screening of placebo formulations with WU/WL test. Insoluble matrix system based on the insoluble lipid SyncrowaxTM HGLC (≥80 % w/w) and loaded with model drugs AZT or MTZ was successfully prepared using the twin-screw hot melt extrusion method and provided as sustained release. The addition of diluents as Avicel® PH-101 or hypromellose type K100M (at the 10% w/w level) can be used for the adjustment of drug release profile. The development of cracks in the SyncrowaxTM HGLC lipid matrix during the cooling down stage could be accounted as an additional aspect of drug release facilitation. 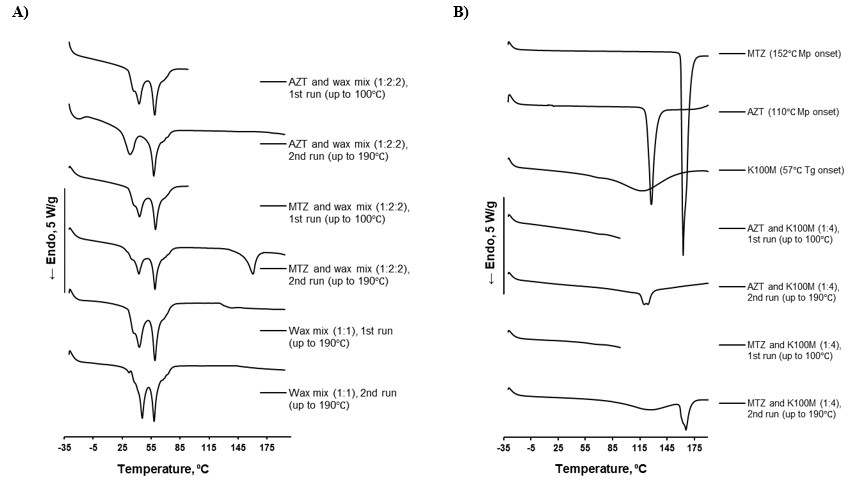 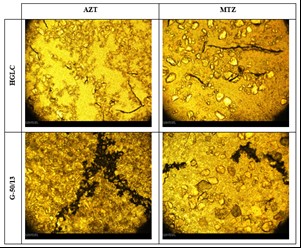 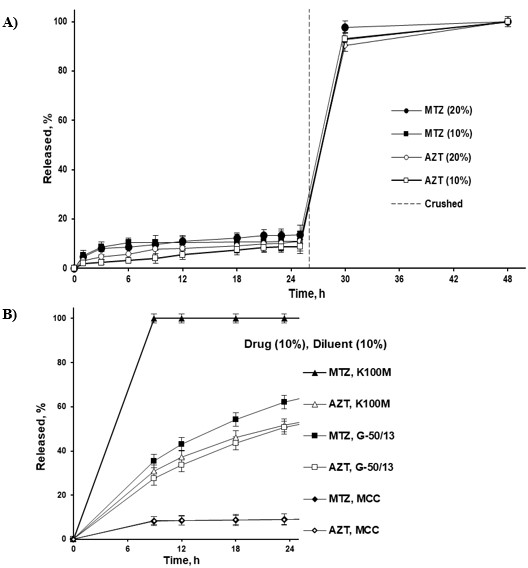