Absorption Driven Drug Formulation through the Example of Telmisartan

Purpose: The use of in vitro flux measurements in formulation development and bioequivalence prediction has been explored in a number of recent studies [1 - 4]. The benefits of such measurements are based on the fact that they capture the complex interplay between the effects of formulation ingredients on solubility, dissolution rate, and permeability of an active pharmaceutical ingredient (API). The current work demonstrates a new aspect of generic formulation development called Absorption Driven Drug Formulation (ADDF) that investigates and considers the excipient effect on absorption from the excipient selection through the whole development process. ADDF utilizes permeability and flux assays in each development phase to be able to select the most advantageous excipients to enhance or hinder the absorption.

Methods: PAMPA Measurements
Each well of the top (acceptor) compartment of 96-well STIRWELL™ PAMPA sandwich was coated with 4 µL of n-dodecane. The resultant sandwich was incubated at 37 ͦC and both compartments were stirred at 60 µm (Aqueous Boundary Layer, (ABL) thickness) with Gut-Box™. After 30 minutes the PAMPA sandwich was separated and 100 µL of both the donor and acceptor compartments were transferred to UV plates. UV absorption (230–400 nm) was measured with Tecan Infinite M200 UV plate reader driven by PAMPA Explorer software™.
µFlux Measurements
Electrospun formulations of Telmisartan (TEL) were tested using MicroFLUX™ apparatus. Concentration in both chambers was monitored in real-time using in situ fiber optic dip probes connected to the Rainbow Dynamic Dissolution Monitoring System. A PVDF membrane impregnated with 25 µL n-dodecane was applied to form a lipophilic barrier between the donor and the acceptor chamber.
MacroFlux Measurements
Final dosage forms of TEL were tested using MacroFLUXTM. The receiver chamber integrated with permeation membrane (same membrane as used in MicroFlux studies), overhead stirrer, and fiber optic UV probe was inserted in the standard 900 mL vessel of USP 2 apparatus (Erweka DT 126 Dissolution Tester).
Formulation preparation
Calculated amounts of the polymers and TEL were added into 8 mL of the solvent and stirred magnetically at 600 rpm until the dissolution was complete. The electrical potential applied on the spinneret electrode (inner diameter 0.8 mm) of the electrospinning device was 25 kV (NT-65 high voltage DC supply). A grounded aluminum plate covered with aluminum foil was used as a collector (20-30 cm from the spinneret). Polymer solutions were dosed with 5-15 mL/h at room temperature (25 ͦC) with a SEP-10S Plus type syringe pump.

Results: Excipient selection
The excipients of the available telmisartan formulations and widely used standard excipients were involved in the first API-excipient investigations. A 25% reduction in permeability was seen for the surfactants, while the polymers increased permeability by 5-10%. Mixed effects were experienced with fillers, where mannitol provided 15% lower permeability than the others.
Excipient combinations and formulation strategy
Considering conditions required for the application of electrospinning, HPMS-AS and PVP were selected as suitable excipients for the preparation of pre-formulation samples. The tested pre-formulation samples confirmed that the selected polymers are suitable to enhance API supersaturation, however, no significant difference has been found between formulations of PVP and HPMC-AS.
Comparing final formulations
To simulate the in vivo conditions, media change (SGF to FaSSIF) was carried out after 30 minutes. In the case of all formulations, TEL started dissolving in the SGF stage of the procedure. During the first 30 minutes of the experiment, no flux across the membrane was detected because of the charged state of the API, while after media change TEL started to permeate through the membrane. The initial flux results showed a non-significant difference between Micardis (innovator product) and the developed formulations. In the case of HPMC-AS based formulations, the mannitol-containing ones performed more poorly (6% lower flux) compared to the sorbitol ones, in accordance with the expectations from the excipient selection study.

Conclusion: The described formulation development procedure demonstrated how excipients can be classified in the early stage of excipient selection and the most advantageous ones can be used in the later stages to ensure suitable behavior of the final product. 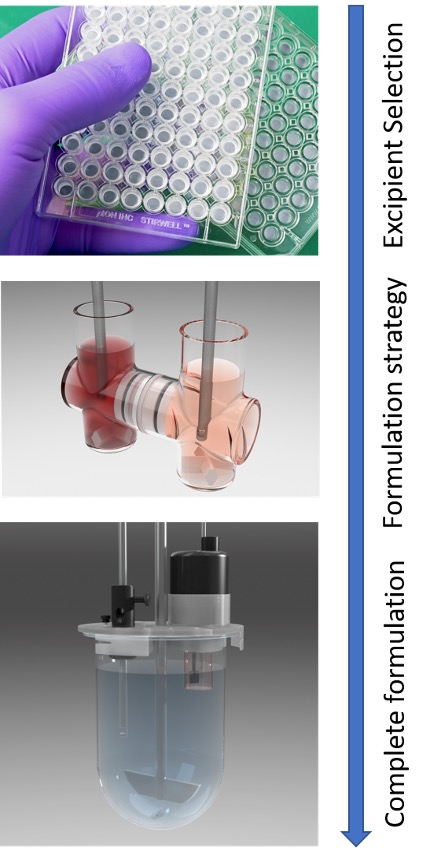