Purpose: Obesity and glioblastoma multiforme (GB) are two unmet medical needs where effective therapies are lacking. While completely different in pathophysiology, they are linked by cellular fatty acid (FA) metabolism. Carnitine palmitoyl transferase 1 (CPT1), an enzyme catalyzing the rate-limiting step in fatty acid oxidation (FAO) 1, is a viable target for both diseases. Inhibition of CPT1 in the hypothalamus contributes to reduced food intake because of neuronal FA-CoA accumulation 2, leading to reduced expression of orexigenic proteins and reduced food intake 3. Conversely,  CPT1 is also crucial to the survival of certain cancers, including GB, where it is overexpressed 4. This makes CPT1 inhibition a possible strategy to suppress GB 5.C75, a fatty acid synthase inhibitor, forms an adduct with CoA to form C75-CoA. It is a strong competitive inhibitor to CPT1 6 that is selective in its target, unlike other known inhibitors. However, it is polar and charged, having low cell membrane permeability, and therefore needing a delivery system for intracellular transport. Cationic di-block polymers such as PEG-poly{N-[N’-(2-aminoethyl)-2-aminoethyl]aspartamide} (PEG-PAsp(DET)) can be used to form a poly-ion complex (PIC) micelle, having a monoprotonated amine side chain at pH 7.4 7, which can interact with the anionic C75-CoA.In this study, we demonstrated the encapsulation of C75-CoA in a PIC micelle for delivery into both glioma cells and hypothalamic neurons.

Methods: (±)-C75-CoA and its enantio-separated forms (+)- and (-)-C75-CoA were used to form PIC micelles with PEG-PAsp(DET). Cytotoxicity assays and ATP level measurement were measured in both U87MG human glioma cells and GT1-7 murine hypothalamic neurons after incubation with the micelles and free drugs. A fluorescent CoA derivative, Fluor-CoA, was also synthesized and encapsulated in the same delivery system and used as a model particle for quantifying cellular uptake in both cell types.

Results: (±)-, (+)-, and (-)-C75-CoA were mixed with PEG-PAsp(DET) in a 1:1 anion/cation ratio in pH 7.4 buffer to give 50-70-nm  micelles with a unimodal size profile and narrow polydispersity. Size was maintained upon introduction of physiological saline. Free and micellar C75-CoA were incubated with U87MG for 72 h, with etomoxir (ETO) as comparison. (±)-, (+)-, and (-)-C75-CoA were all significantly more cytotoxic in micelle form compared to the respective free drugs. Differences among the mean IC50 of all C75-CoA micelles were non-significant and comparable with ETO.The cytotoxicity of (±)-C75-CoA micelle became more pronounced incubation period is increased. This demonstrates that FAO is needed in cell survival and that its inhibition eventually leads to cell death. It also showed that the delivery of (±)-C75-CoA inside the cell is important in amplifying its growth inhibitory properties. Given its limited permeability across the cell membrane, the micellar form neutralized this negative charge and promoting its transport into the cell through endocytosis.We examined whether C75-CoA inhibits FAO by measuring ATP concentrations in U87MG and GT1-7. ATP production was indeed found to be hampered by adding C75-CoA in both cell types. The measured concentrations from micelle-treated cells were significantly lower than those from free drug-treated groups, suggesting that the effective delivery of C75-CoA inside the cells leads to a higher concentration of it reaching the mitochondria, with a more-pronounced FAO inhibition being the main consequence.Fluor-CoA also yielded monodisperse micelles similar to C75-CoA. Micellar internalization was significantly greater than that of the free dye. However, uptake of both increased with time, with this effect is more pronounced in U87MG than GT1-7. The %Fluor-CoA+ cells were also expressively higher for the micelle across cell lines and time points. From this data, it can be convincingly concluded that neuronal and glioma cellular uptake of micelles is superior to that of the free dye, validating the need for cellular delivery systems for anionic, CoA-type molecules.

Conclusion: This report is the first to describe the delivery of a CPT1 inhibitor to inhibit cellular FAO in glioma cells and neurons using a PIC micelle-type system. C75-CoA toxicity against U87MG was enhanced significantly in the micellar form consistent with its metabolic inhibitory activity, where lower ATP production in both U87MG and GT1-7 was induced by C75-CoA micelle. Fluor-CoA micelle showed more efficient and homogenous cellular uptake in both cells, in comparison with the free dye. These outcomes strongly support the effectiveness of using a PIC micelle-type system to deliver anionic small molecules into glioma cells and neurons meant to inhibiting enzymes such as CPT1, for future applications in diseases like obesity and cancer. 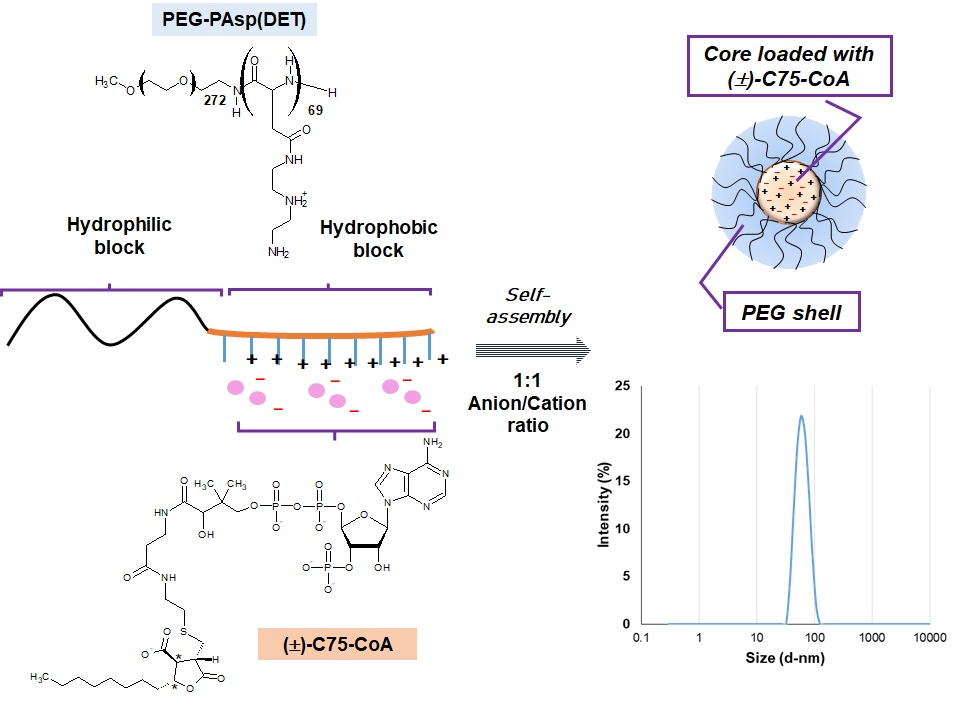 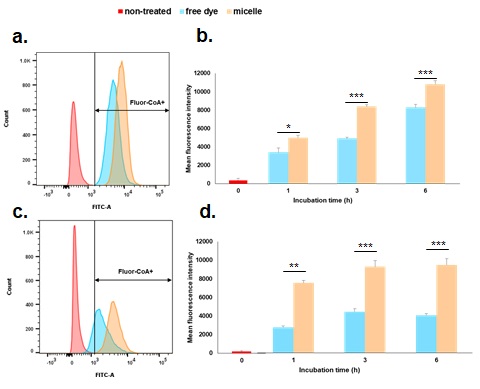