Purpose: Liquid crystals (LCs) and glasses are two important classes of materials, with LCs offering easy control of molecular packing by external stimuli and glasses providing liquid-like spatial uniformity and crystal-like mechanical strength. Here we report that it is possible to create organic glasses with tunable LC order by controlling glass-forming conditions such as cooling rate.  For rod-like mesogens itraconazole and saperconazole, smectic LC order trapped in the glass is determined by the kinetic arrest of the end-over-end rotation at a given cooling rate. The two molecules are structurally similar antifungal drugs, with saperconazole obtained by replacing each of two Cl atoms with F.

Methods: LC glasses were prepared by cooling a melt at various rates ranging from 0.01 to 180 K/s. The fastest cooling rate was achieved by plunging a thin liquid film in liquid nitrogen. Differential Scanning Calorimetry (DSC) was performed to determine the glass transition temperature and LC transition temperatures. Smectic ordering was measured by X-ray scattering in the transmission geometry with a 2D detector. Synchrotron X-ray scattering measurement using a simultaneous SAXS/WAXS setup was performed at Advanced Photon Source, Argonne National Lab. Dielectric spectroscopy was measured near the glass transition temperature to study the time scales of different molecular rotations.

Results: Upon cooing, both itraconazole and saperconazole transform from an isotropic liquid to a nematic phase at TN/I, and then to a smectic phase at TSm/N , eventually to a glass at Tg. X-ray scattering pattern of both itraconazole and saperconazole between Tg  and TSm/N shows smectic order peaks at 0.2 and 0.4 Å-1. The scattering intensity of smectic peaks is temperature dependent but independent of the path reaching the temperature. The smectic order in both LC glasses is highly dependent on cooling rates. Faster cooling rate results in lower smectic order. Dielectric spectroscopy reveals two relaxation processes in both mesogens. The fast process τα is assigned to the rotation about the long axis and slow process τδ  assigned to the end-over-end rotation about the sort axis. At a given cooling rate, only the kinetic arrest of the slow process τδ can predict the smectic order in the glass. This confirms the smectic order trapped in rod-lie LC glass is controlled by the kinetic arrest of end-over-end rotation of the rod-like molecule. Synchrotron X-ray scattering measured using a simultaneous SAXS/WAXS setup reveals identical intramolecular structures in glasses with different LC order, but widely different molecular packing. Density modulation is observed along the smectic LC director for at least several micrometers, while the order perpendicular to the LC director has a shorter range of several nanometers.

Conclusion: For both itraconazole and saperconazole, the kinetic arrest of the end-over-end rotation controls the smectic order obtained at a given cooling rate. Saperconazole provides a more rigorous test of the conclusion because of its wider temperature range in which smectic order can grow before kinetic arrest. The molecular packing along the LC director and perpendicular to the LC director is highly dependent on cooling rate. Together the results indicate a general principle to systematically control LC order in organic glasses for electronic and pharmaceutical applications. Given that current theories treat LC transitions as instantaneous and thermodynamically controlled, our results motivate further development in which kinetics plays an important role in LC transitions. 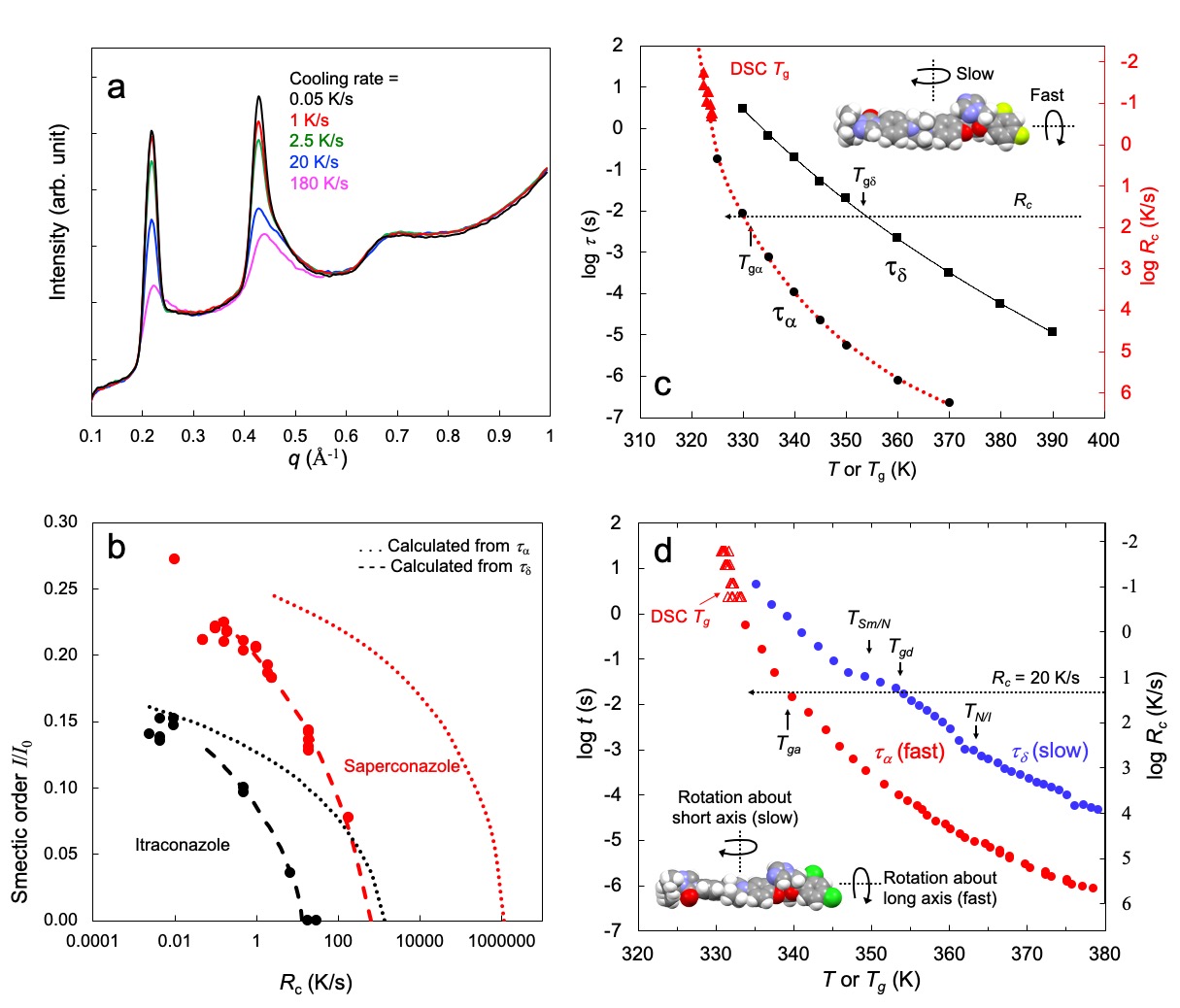 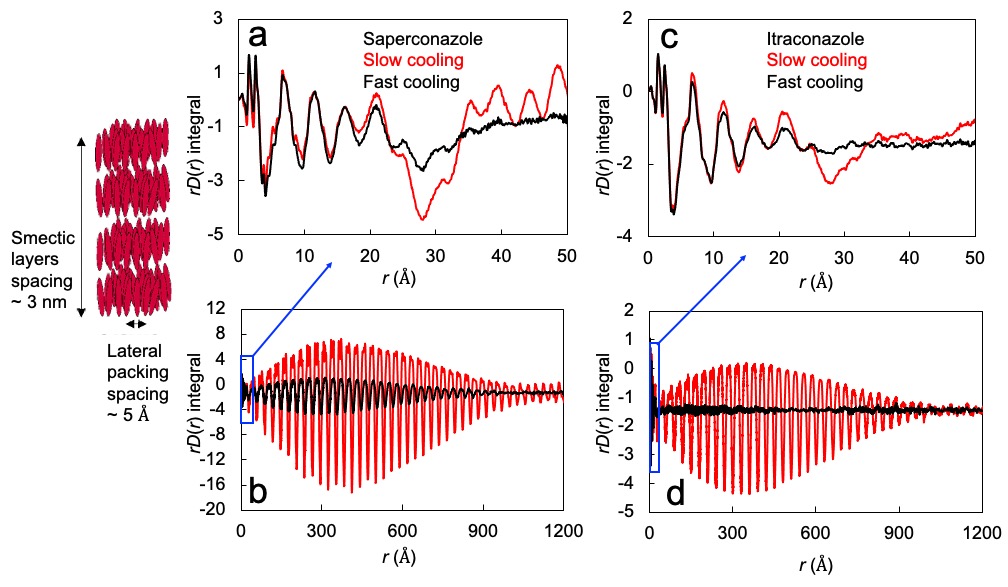