Purpose: Neurological conditions associated with neuroinvasion of human immunodeficiency virus (HIV) are termed as neuroAIDS, which occurs in 39-70% of AIDS patients. Several treatment strategies have been developed for the treatment of AIDS. Still, the neurological complications of the infection are largely treated symptomatically, primarily due to the inability of antiretroviral drugs to reach the brain in therapeutically relevant doses and maintain their levels in the brain for a prolonged period. HIV in the brain is therefore sheltered from circulating antiretroviral drugs and proliferates rapidly, forming viral reservoirs in the central nervous system that further exacerbates HIV associated neurological disorders, such as dementia, impaired short-term memory, psychomotor retardation, and depression. Effective antiretroviral formulations that eliminate the viral reservoirs in the brain, thus mitigate the underlying cause of neuroAIDS, are urgently needed. To this end, we have developed stearic acid-lecithin based solid lipid nanoparticles (SLN) to efficiently shuttle efavirenz (an anti-retroviral drug) into the brain.

Methods: Solid lipid nanoparticles (SLN) were constituted of stearic acid (core lipid), polyethylene glycol 2000, tween 80 (surfactant), and lecithin (co-surfactant) at the ratio of 1:1:2:0.1. The hot emulsion method was selected and optimized to prepare these nanoparticles. SLNs were characterized for size, polydispersity, and zeta potential using dynamic light scattering method. The drug entrapment efficiency and in- vitro drug release were determined using RP-HPLC. In vitro cytotoxicity and cellular uptake of this formulation was evaluated in mouse brain endothelial cells (bEnd.3 cells). Finally, the in vivo biodistribution profile of SLN encapsulated drug was performed using C57Bl/6 mice and compared with free drug.

Results: The formulated efavirenz SLNs were 73.28 ± 2.8 nm in size, having -27.3 ± 3.3 mV zeta potential, entrapped 94.1 ± 0.95% of the drug at 10% loading. The optimized formulation displayed a slow in vitro release profile with 58% and 72% drug being released in 24 and 48h, respectively. In vitro, studies using bEnd.3 cells showed that SLN was not cytotoxic even at high concentrations such as 100 mM, and was efficiently taken up by cells, 78% in 4 hours. The in vivo bio-distribution study of SLN demonstrated 2.4-fold higher drug accumulation in mice brain at 48 h post intravenous administration compared to free drug. The histopathological examination of SLN and free drug-treated organs showed no anomalies.

Conclusion: SLNs with uniform and reproducible size and polydispersity were obtained that can encapsulate high payloads of efavirenz and slowly releases them. These nanoparticles were biocompatible both in vitro and in vivo. The optimized formulation displayed a slow in vitro drug release profile and managed to demonstrate higher drug accumulation in the brain as compared to the free drug even at 48h post injection, in vivo. This suggests that SLN based efavirenz delivery to the brain can help thwart neurological damage caused by HIV for efficient management of neuroAIDS. 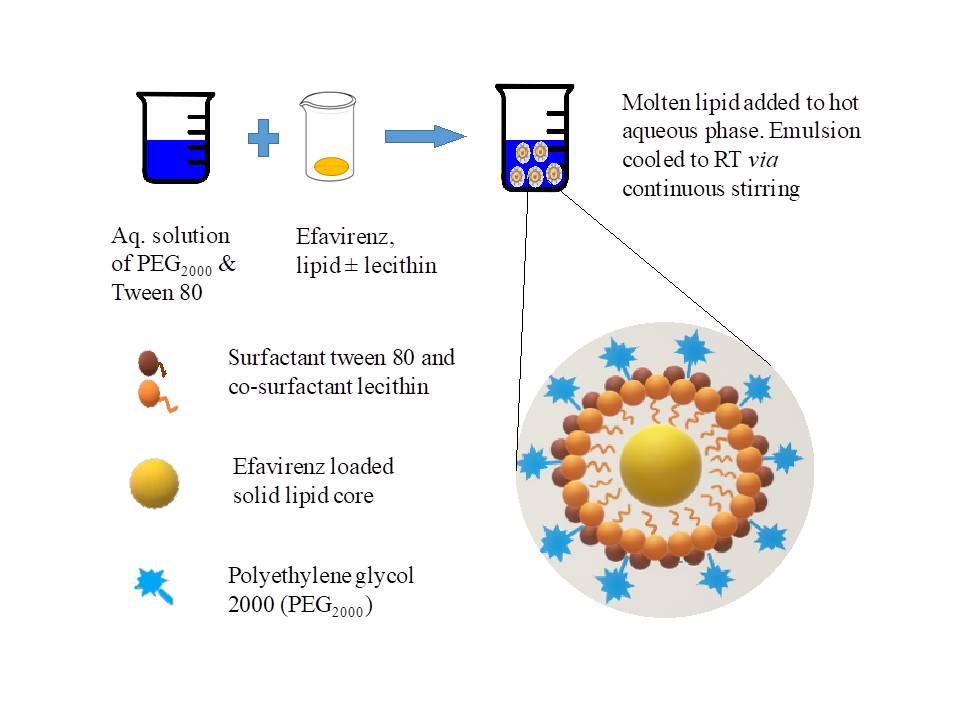 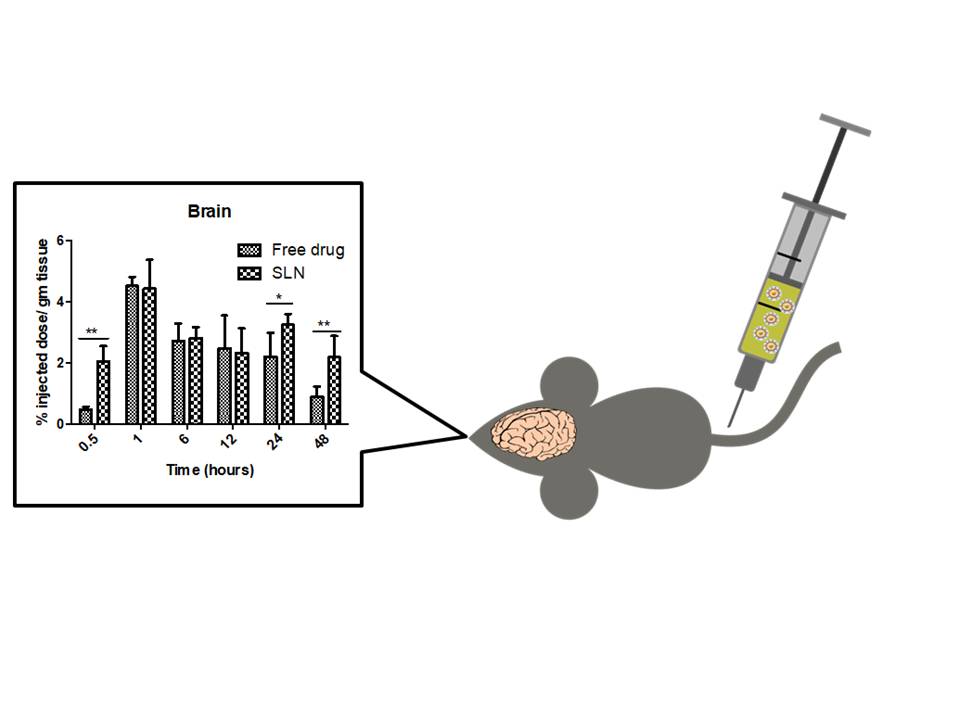