Physiologically Based Pharmacokinetic Modeling of Oxybate: The Role of Counter-ions in Gastrointestinal Absorption

Purpose: Narcolepsy is a lifelong neurological disorder associated with reduced health-related quality of life and increased risk of cardiovascular and cardiometabolic comorbidities. Sodium oxybate (SXB) is an FDA-approved AASM standard of care for the treatment of cataplexy and excessive daytime sleepiness (EDS) in narcolepsy. At recommended doses, SXB contributes 1100–1640 mg sodium to the recommended daily intake of < 2300 mg. To support the development of an alternative formulation of oxybate, a mechanistic physiologically based pharmacokinetic (PBPK) model was developed to understand the distribution, clearance, and intestinal absorption mechanisms of oxybate and predict the pharmacokinetic profiles of alternative formulations of oxybate.

Methods: All simulations were performed using a customized version of GastroPlus™ (version 9.5.0004; Simulations Plus, Inc., Lancaster, CA) that incorporates allosteric Michaelis-Menten equations that describe the influence of sodium concentration on the maximum velocity (Vmax )of sodium-coupled monocarboxylate transporters, SMCT1 and SMCT2. The physicochemical, biopharmaceutical, pharmacokinetic, and metabolic parameters were compiled from in silico, in vitro, and in vivo data. The ADMET PredictorTM Module was used to predict values for physicochemical properties if in vitro data were not available. The base PBPK model was built and refined using observed pharmacokinetic data. Intestinal absorption was described using a combination of passive transcellular diffusion and paracellular and carrier-mediated transport. Small intestinal influx transporters SMCT1 (Michaelis-Menten constant [Km] = 168 µg/mL, fixed)1 and SMCT2 (Km = 8400 µg/mL, fitted),2 and efflux transporter MCT1 (Km = 215 µg/mL, fitted),3,4 were used to describe the carrier-mediated absorption. Mean Vmax values for these influx and efflux mechanisms were estimated using average clinical data. Gastrointestinal lumen sodium concentrations used for the allosteric regulation of the Vmax values were set initially to the product of oxybate concentration (mM) and sodium mole fraction among counter-ions present in the formulation. The lumen sodium concentrations were updated according to the moles of oxybate transported by the SMCTs and the transport stoichiometries (2:1 and 1:1 sodium per oxybate for SMCT1 and SMCT2, respectively). The model considers the equilibrium between oxybate and γ-butyrolactone under prevailing physiologic conditions, and the dissolution and release rates of oxybate from the formulations. Distribution to tissues and organs was perfusion limited, and parameters for representative study participants were generated by the Population Estimates for Age-Related PhysiologyTM Module in GastroPlus. Metabolic clearance of oxybate was simulated by a single enzyme, γ-hydroxybutyrate dehydrogenase, in the liver and kidney. Values for kinetic constants (Km = 3 µg/mL; population mean Vmax = 9.0×10-4 mg/s/mg enzyme) were derived by fitting to oxybate plasma profiles observed after intravenous bolus dosing of SXB in a study with healthy subjects. The amount of oxybate eliminated unchanged in urine via glomerular filtration is ≈5%, due to active reabsorption from the filtrate. This was simulated by means of a single transporter, SMCT1, assumed to be expressed in the apical membranes of kidney cells with in vitro Km = 168 µg/mL1 and Vmax = 1.3×10-3 mg/s/mg enzyme. No attempt was made to characterize population variability around Vmax for renal reabsorption.

Results: The PBPK model encompasses the gut apical membrane, the sodium-coupled influx transporters SMCT1 and SMCT2, the gut basolateral efflux transporter MCT1, a single metabolic enzyme expressed in liver and kidney, and the reuptake into the kidney by a single transporter, which described the nonlinear absorption, metabolism, and elimination properties of oxybate (Figure 1). Simulated and observed group average oxybate profiles and pharmacokinetic parameters matched closely for observed SXB data (Figure 2). The fraction of oxybate absorbed into the portal vein via active uptake from the intestinal tract by SMCT1 and SMCT2 depends on allosteric activation by sodium, as demonstrated by a Hill model for a series of formulations in which the content of sodium varied (Figure 3). Model simulations indicated that sodium activation of the coupled uptake of oxybate and sodium by SMCT1 and SMCT2 at least partially explained the reduced gastrointestinal absorption of oxybate under fasting conditions at lower sodium content.

Conclusion: The nonlinear oral absorption, metabolism, and elimination of oxybate can be described by a model that encompasses gut apical (SMCT1 and SMCT2) and basolateral membrane (MCT1) transport, saturable metabolism (liver and kidney), and reabsorption into the kidney (SMCT1). Because oral absorption of oxybate is primarily mediated by active transport, which is affected by the sodium concentration, formulations with reduced sodium content can result in reduced rate of oxybate absorption. This may be a mechanism of the lower maximum plasma concentration (Cmax) and later time to Cmax (Tmax) observed with JZP-258, an oxybate formulation with 92% less sodium than SXB, compared with SXB in studies in healthy participants. JZP-258 may represent a novel oxybate treatment option for people with narcolepsy. 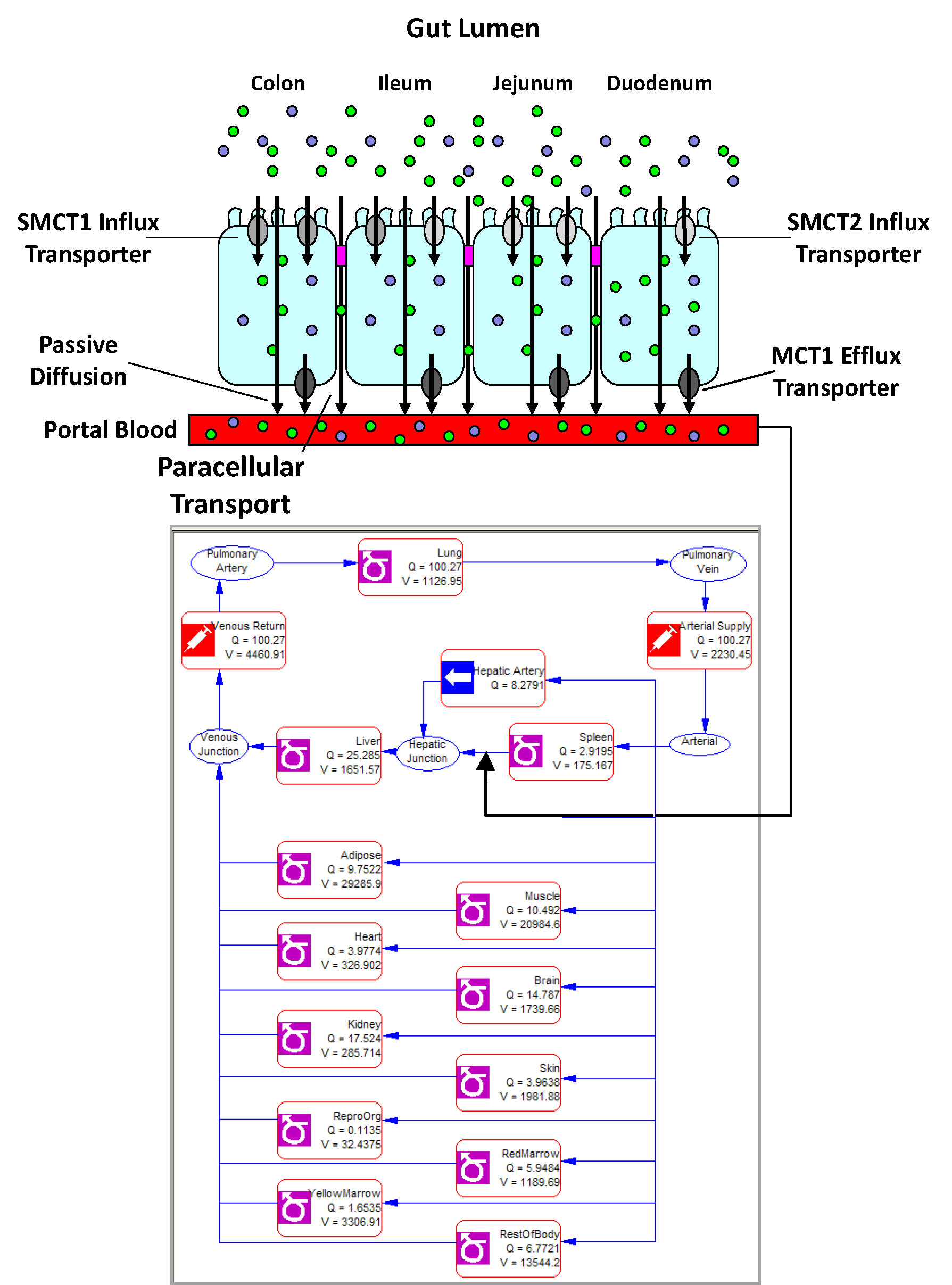 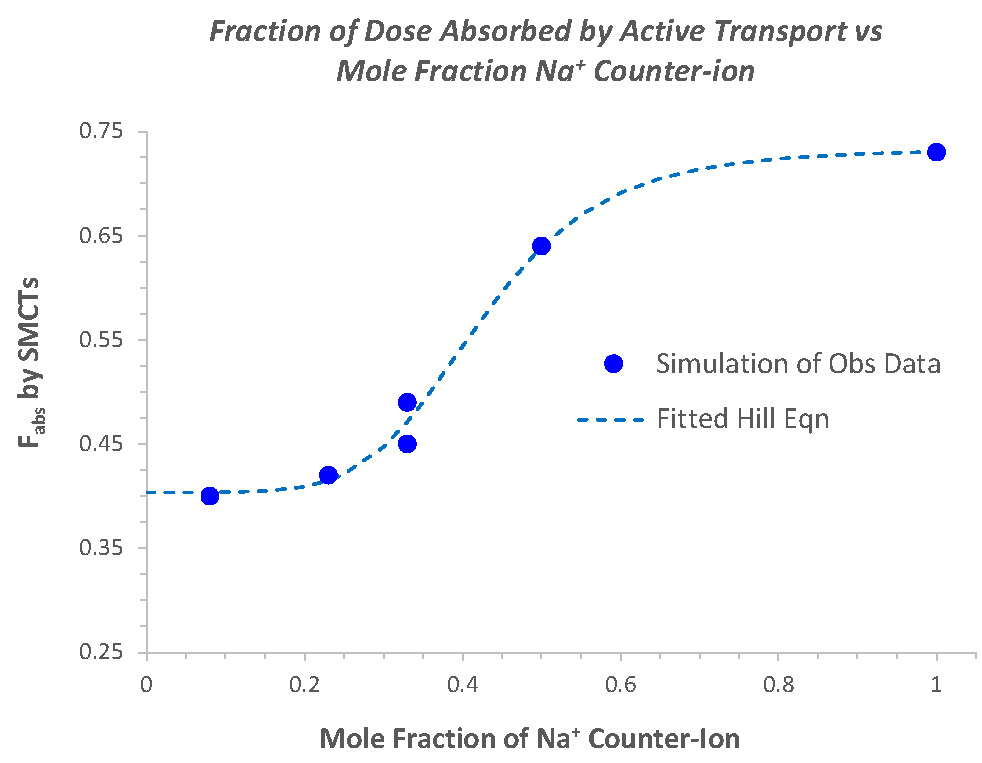