Purpose: An increasing number of drugs from contemporary pharmaceutical pipelines have poor solubility and low bioavailability and thus are classified as Biopharmaceutics Classification System (BCS) II and IV. Over the past 10 years, the pharmaceutical industry has introduced amorphous solid dispersions (ASDs) as a viable formulation technique to address these challenges. KinetiSol Processing is a high-energy, thermokinetic mixing process designed to produce amorphous solid dispersion compositions that overcome the processing and formulation limitations associated with spray drying and hot melt extrusion. To better understand avenues to circumvent degradation for drugs that are heat labile, it is essential to probe more deeply into the KinetiSol process itself.

Minimizing exposure to elevated temperatures by prolonging the mixing time at a lower temperature and lower blade speed is advantageous for drugs that are heat and shear labile, such as those that chemically degrade when exposed to high shear or heat. Controlling the KinetiSol processing parameters cannot generally achieve prolonged mixing at a selected steady-state temperature. Polymers have intrinsically poor conductive properties, and when they are exposed to kinetic energy increases, the energy input into the composition is greater than the energy output of the composition resulting in heating of the composition. We hypothesize that including a Thermally Conductive Excipient (TCE) into the drug-polymer composition will modify the composition’s conductive properties and enable for a much more efficient heat transfer without the TCE chemically interacting with either the drug or carrier in the composition.

Methods: BI 639667 (BI-667) was donated using Boehringer Ingelheim’s opnMe molecule sharing site (opnMe.com). BI-667 is a BCS Class IV molecule, log P value of 1.4 and exhibits degradation at the onset of its high melting point, 206C. Specifically, candurin is the TCE employed in this study. Candurin is a type of potassium aluminum silicate-based pearlescent pigment (PAS-BPP) pigment that consists of titanium dioxide and/or iron oxide coating. PAS-BPP includes commercially available food additives that are used in confections, candy, decorations, and beverages at maximum concentrations of 1.25 %, equating to a range of 10 - 323 mg/kg/day. Physical mixtures containing HPMCAS-HMP: BI-667 (67:33) and HPMCAS-HMP: BI-667: Candurin (64:33:3) were evaluated to determine the impact of the thermally conductive excipient on formulation processing. Modulated differential scanning calorimetry (mDSC) and Fourier-transform infrared spectroscopy (FTIR) evaluated the thermally conductive excipients (e.g., candurin) interaction with the composition. Compositions with and without the thermally conductive excipient were compared during the KinetiSol process. A non-sink pH shift dissolution incorporated 120 mg KSD (80%) and 30 mg (20%) of anhydrous lactose as a diluent within size 2, HPMC based capsules.

Results: mDSC and FTIR did not identify interactions between candurin and HPMCAS-HMP:BI-667 physical mixtures. Compositions with candurin achieved a steady-state processing temperature with + 5 °C of the target temperature, and these compositions demonstrated the ability to mix for prolonged time periods while maintaining within this steady-state temperature range, thus enabling the formation of an ASD at a temperature that the drug does not chemically degrade. Additionally, by adjusting the mixing speed of the blades during the KinetiSol process, the steady-state processing temperature was controlled. Kinetisol processing of a drug-polymer-TCE composition near the glass transition temperature midpoint of HPMCAS-HMP (122 °C) for 92 seconds created an amorphous solid dispersion demonstrating, thus confirming that temperature is not the only processing parameter responsible for solubilizing the crystalline drug particles within a molten polymer and that mixing was also required. Fourier-transformed infrared spectroscopy (FTIR), wide-angle X-ray scattering (WAXS), and small volume pH-shift dissolution testing confirmed that no change in product performance occurred when the TCE was incorporated in the composition

Conclusion: This study demonstrated that inclusion of the TCE modified the composition’s thermal conductivity to efficiently dissipate heat to achieve a selected steady-state temperature during the KinetiSol process, thus providing prolonged mixing times at a lower temperature for dissolving the drug into the polymer to achieve an ASD without sacrificing product performance. 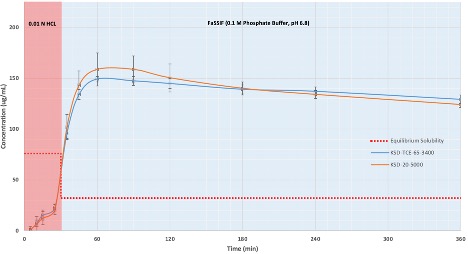