Purpose: Nucleic acid vaccines, DNA and messenger RNA (mRNA), have emerged as promising modalities for infectious disease and for cancer immunotherapy due, in part, to shortened manufacturing cycles and high potency. Currently, there is limited understanding of the mechanisms of antigen presentation and induction of specific T-Cell responses critical to long-term immunity. Lipid nanoparticles (LNP) composed of ionizable lipids are important components of such vaccines as they can convey and present the nucleic acid effectively to the immune system. Further improvements in LNP carriers require a reduction in the 1) systemic toxicity, 2) improved endosomal escape, 3) potent and T-cell specific adjuvating function and 4) targeting to specific antigen presenting cells. Here we report progress on the development of a biodegradable ionizable lipid based LNP (ssPalmE-LNP) and its application to DNA and mRNA vaccines.

Methods: LNP Preparation: The chemical synthesis of the ssPalms with myristic acid, vitamin A, and vitamin E as a hydrophobic scaffold (ssPalmM, ssPalmA, and ssPalmE, respectively) has been reported previously.(1,2). Plasmid DNA encoding luciferase (pCpGfree-Luc(0)) and ovalbumin (pCpGfree-OVA(0)) were prepared as described previously (3). LNPs were prepared by the ethanol dilution method as described previously (4) with minor modifications. In Vivo Studies: The ssPalmM-LNPs, ssPalmA-LNPs, or ssPalmE-LNPs encapsulating pCpGfree-Luc(0) were subcutaneously injected to BALB/c mice at a dose of 2.4 μg of pDNA or 0.9 μg in case of C57BL/6J mice. Naked pDNA (pCpGfree-OVA(0)) was used at 2.4 μg as a control. CTL assay was performed after 7 days.  CTL Assay: Splenocytes were prepared from naiv̈e C57BL/6J mice. Half of the splenocytes were then incubated with the OVA257‑264 peptide for 30 min at 37 °C in RPMI-1640 medium containing 50 μM of 2-mercaptoethanol, 10 mM HEPES, 1mM sodium pyruvate, 100 unit/mL penicillin-streptomycin, and 10% FCS. The OVA257‑264 peptide-pulsed or nontreated splenocytes were then labeled by incubation with 5 or 0.5 μM CFSE in PBS (CFSEhigh, target cells and CFSELow, control cells, respectively) for 10 min at 37 °C. Immunized mice were injected with a mixture of 5 × 106 cells each of CFSEhigh, target cells and  CFSELow, control cells. At 20 h splenocytes were harvested and analysed by FACS where CTL activity was calculated as ratio of CFSEHigh to  CFSELow cells.  Immunization and Infection of Toxoplasma gondii: Mice were immunized with the ssPalmE-LNPs encapsulating pCpGfree-TgPF or pCpGfree-Luc(0) at a dose of 10 μg of pDNA with boost immunizations at 14 and 28 days. At 14 days after the third immunization, the mice of all groups were challenged intraperitoneally with 3 × 103 PLK strain and survival curves were generated according to the Kaplan−Meier method.

Results: Transgene Activity of Subcutaneously Injected ssPalm-LPs: The luciferase activity of  IV injected ssPalm derivatives was 0.8 (myristic acid), 1.8 (vitamin A), and 6.0 (vitamin E) fold higher compared to naked pDNA only.  CTL Assay:  C57BL/6J mice were immunized subcutaneously (back of the neck) with ssPalm-LNPs. OVA-encoding pDNA (pCpGfree-OVA(0)) was administered as the ssPalmM-LNPs, ssPalmA-LNP, or ssPalmE-LNPs at a dose of 0.9 μg of pDNA. The CTL percent lyusis activity at 1 week was 28% (ssPalmM), 64% (ss-PalmA) and 86% (ss-PalmE) of pulsed antigen cells.  Antiprotozoan effect: C57BL/6J mice were immunized subcutaneously with ssPalmE-LNPTgPF or ssPalmE-LNPnon‑coding at a dose of 10 μg of pDNA. Cumulative survival rates at 30 days were 90% and 30% respectively.

Conclusion: After subcutaneous administration, the LNPs containing an ssPalmE, an ssPalm with vitamin E scaffolds, elicited a higher gene expression activity in comparison with the other LNPs composed of the ssPalms with different hydrophobic scaffolds. Immunization with the ssPalmE-LNPs encapsulating plasmid DNA that encodes ovalbumin (OVA, a model tumor antigen) or profilin (TgPF, a potent antigen of Toxoplasma gondii) induced substantial antitumor or antiprotozoan effects, respectively. These findings suggest LNP composed of ssPalmE lipids can be effective delivery systems for DNA vaccines. 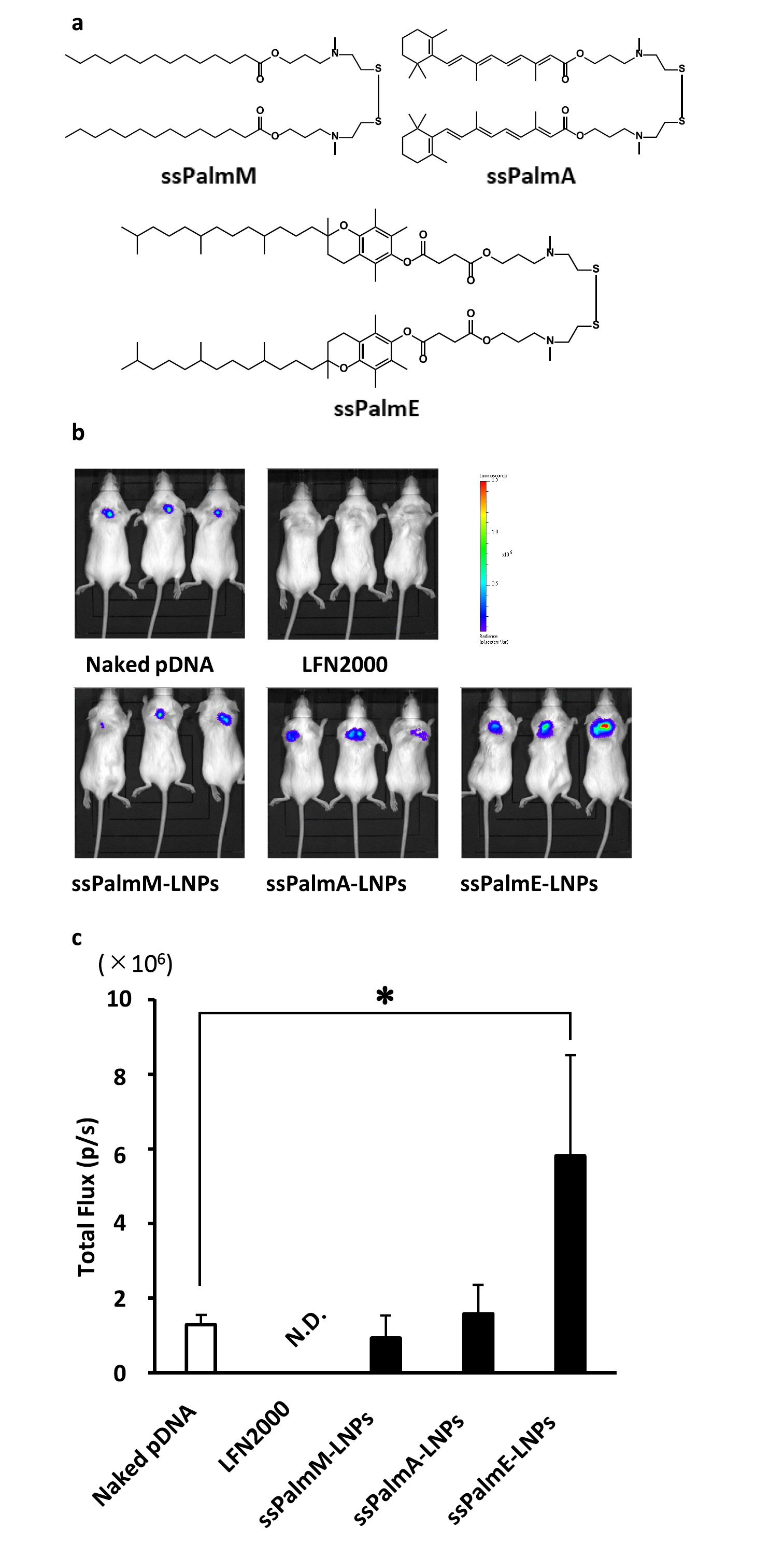 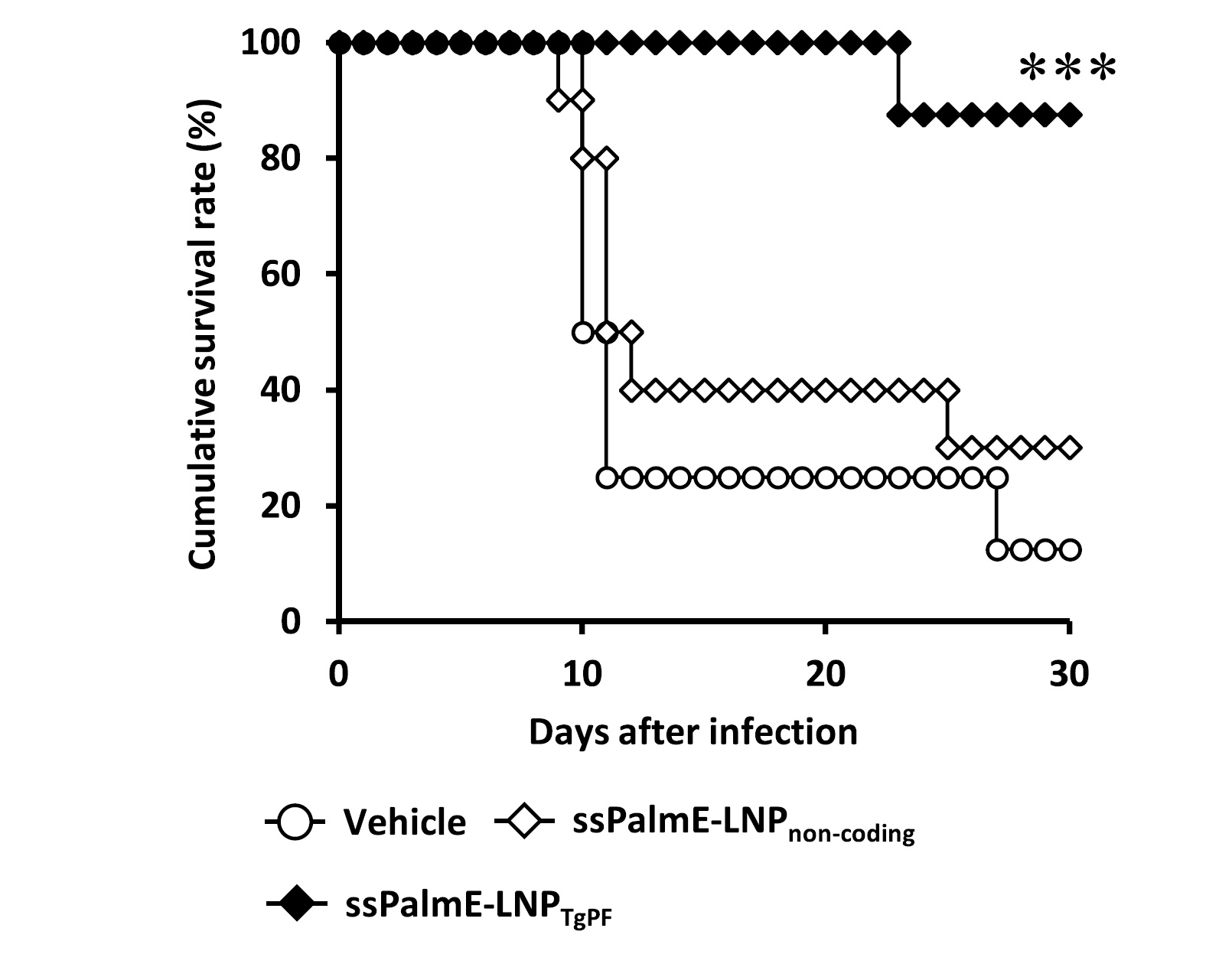