Purpose: Aquacoat ECD-30 is an aqueous ethyl cellulose pseudolatex, used for sustained release, taste-masking, and moisture barrier applications. Formulation of the coating dispersion and process parameters used during the coating applications are critical to achieve desired drug release profiles. Selection and levels of pore-former and plasticizer in the formulation, as well as coating weight gain and curing conditions also impact drug release. The purpose of this study was to evaluate the effect of various formulation and process parameters on barrier membrane coated chlorpheniramine maleate (CPM) multiparticulates using Aquacoat ECD-30.

Methods: Suglets® sugar spheres 18/20 mesh size (850-1000 micron) were used as the base for CPM drug layering, then seal-coated with an hypromellose based Opadry system followed by application of Aquacoat ECD-30 dispersion. Different plasticizers, such as triethyl citrate (TEC,  water miscible), and dibutyl sebacate (DBS, water immiscible), were added to the dispersion at 24% w/w concentration with respect to amount of ethylcellulose (in the Aquacoat coating) and mixed for 1 and 24 hours, respectively, using over-head propeller stirrer at medium speed. The plasticized dispersions were further diluted to achieve 15% w/w solids content. Separately, Opadry and Opadry QX were used as pore-former at 15% w/w with respect to the ethylcellulose. The pore-formers were separately mixed with water for 1 hour, added to the pre-plasticized Aquacoat ECD, and stirred for 20 minutes. The final solids content of the dispersion was maintained at 15% w/w. The resulting dispersions were screened, through 60 mesh, and applied as barrier membrane coating on seal-coated CPM beads (batch size, 800 g) up to 30% w/w weight gain using a Glatt (GPCG 2) bottom spray fluid bed processor fitted with Wurster Column. The processing conditions are shown in Table 1. Samples of coated beads were collected at intermediate weight gains. Beads collected at different weight gains were divided into two groups, one was kept uncured and the other group was cured at 60°C for 2 hours in a convection oven (VWR). All samples of coated beads were characterized for particle size distribution and sphericity using Camsizer (Retsch). Around 1g (equivalent 32.6 mg of CPM) of coated bead samples were tested for dissolution behavior in 1000 ml DI water at 37°C using Apparatus I at 100 rpm for 24 h.

Results: As expected, the higher coating weight gain resulted in slower drug release (Figure 1). Curing was required for both plasticizers to achieve extended release of the. Presence of pore-formers increased the rate of drug release further. Although it was easy to prepare the dispersions and coat the beads using Aquacoat ECD containing pore fomer, the drug release was faster with Opadry (HPMC based) used as pore former as compared to Opadry QX (Figure 2). Table 2 shows the amount of drug released at 4 hours dissolution time for uncured and cured samples.  The formulation containing TEC as a plasticizer and hypromellose based Opadry as pore-former did not show slowdown of the drug release even at 30% w/w coating weight gain of Aquacoat ECD-30. 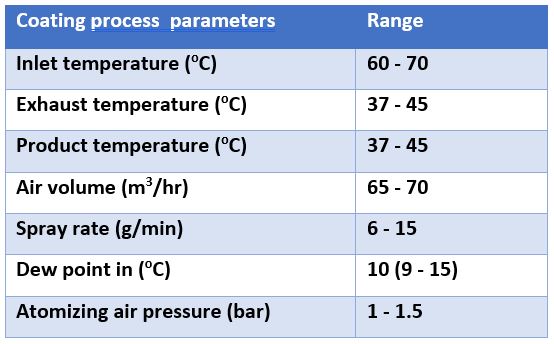 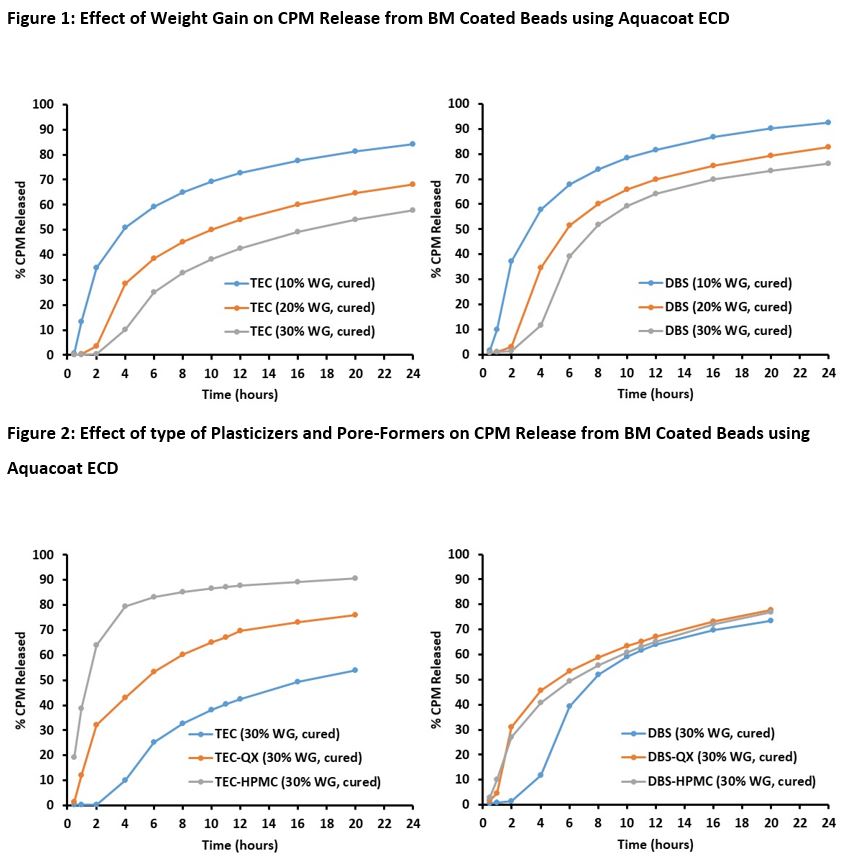