Purpose: As a critical indicator of anticancer drug development, animal models of cancer should recapitulate its progression and  predict its response to anticancer drug treatment in clinic. This study aims 1) to construct multicellular spheroids (MCS) of fluorescent human lung cancer cells (A549-iRFP), 2) to inoculate A549-iRFP MCS into the mice lung; 3) to characterize the resultant lung cancer progression by in vivo florescent imaging, open-chest anatomy and ex vivo imaging.

Methods: A549-iRFP MCS were cultured in spheroids microplates. The growth media was supplemented with 0.3% collagen and the cells centrifuged during seeding to promote cell-cell adhesion. After MCS grew to500 mm in diameter, their viability was assessed by incubation with reagents from the LIVE/DEAD Cell Imaging Kit and imaging under Leica DMIRE2 confocal microscope (λex= 491 nm, λem= 513 nm for live cells; λex= 561 nm, λem= 607 nm for dead cells). Images were analyzed with the ImageJ software. The A549-iRPF MCS of desirable morphology were each taken into a 20-gauge needle, which was then inserted into the left lung through the sixth intercostal space followed by slow injection of the MCS. Animals that had been inoculated with A549-iRFP MCS were imaged on both the left side and the ventral side every three days on a Pearl® Trilogy small animal imaging system and an Odyssey® Infrared Imaging 205 System at the 700 nm channel. Animals for imaging took postures of four directions (left, right, ventral and dorsal). The tumor growth after MCS inoculation was quantified from the left-posture images using the Image Studio Lite Ver 5.2 software. After animal sacrifice by anesthetic overdose at day 8, 11, 18 and 27, the thorax was carefully opened with a midline incision. The diaphragm and the lateral chest walls were then removed to expose the lungs and to confirm the location of the xenograft tumor, which possessed a lighter color than the surrounding tissue. After flushing with PBS, the lung was carefully dissected from the chest and washed with ice-cold PBS before being transferred onto the Pearl® Trilogy system for imaging at the 700 nm.

Results: The green color (calcein-positive) represents live cells and the red color (ethidium-positive) represents dead cells. The plot of fluorescent intensity at two channels showed the heterogeneous distribution of live and dead cells in the A549-iRFP MCS. In the merged image, ethidium signal was stronger at the center of the MCS, which indicates the accumulation of dead cells. On the other hand, less live cells were shownby the calcein signal at the center of the MCS. (Figure 1) Between 3 and 9 days after the MCS inoculation, condensed fluorescence was observed in the left lung (Figure 2), indicating the establishment of a localized tumor in the left lung that mimicked Stage 1 NSCLC in clinic.  Between 9 and 15 days, the fluorescence substantially increased in intensity and/or split to multiple locations in the left lung, indicating the presence of tumor(s) that mimicked Stage 2 NSCLC in clinic.  Between 15 and 21 days, more fluorescent signal was detected from the ventral side, suggesting a Stage 3-like development of the xenograft. In addition, the anatomy and the ex vivo imaging also detected tumor growth on the surface of the heart, which is a key indicator for Stage 3 NSCLC in clinic.  About 21 days after the MCS inoculation, perfused fluorescence was detected on both sides of the lung, and the open-chest anatomy showed perfuse tumor growth in the heart, the trachea, and the major blood vessels, indicating the metastasis of the cancer, which mimicked the Stage 4 NSCLC. (Figure 2 and 3)

Conclusion: A novel orthotopic lung cancer model based on intrapulmonary inoculation of MCS of fluorescent human lung cancer cells (A549-iRFP) was successfully established. The A549-iRFP MCS in culture has a tight round morphology and a necrotic core, which can reflect the essential characteristics of a solid tumor. After inoculation into the left lung of mice, the xenograft MCS progressed through distinct phases that  mimicked the four clinical stages of NSCLC. 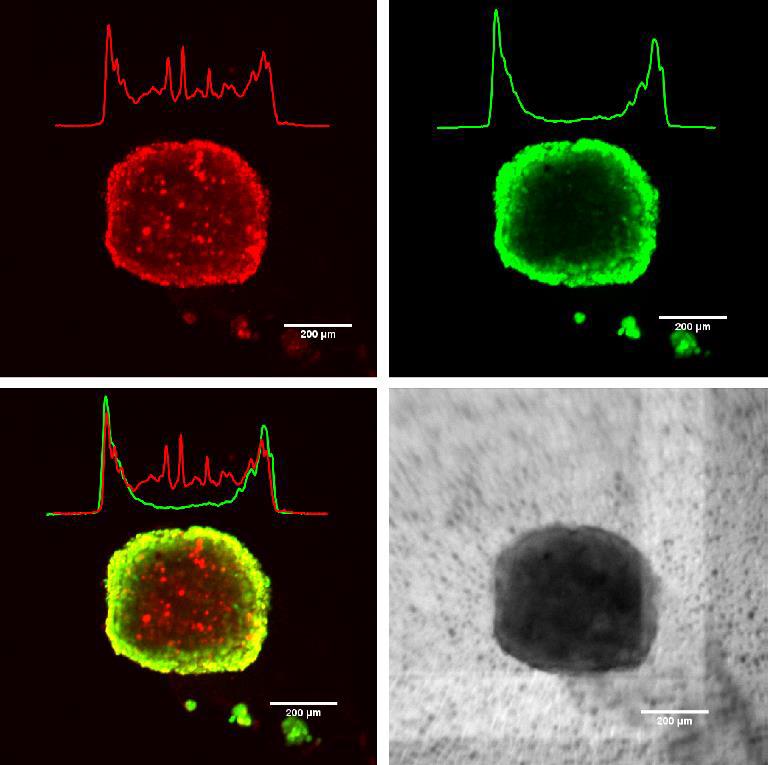 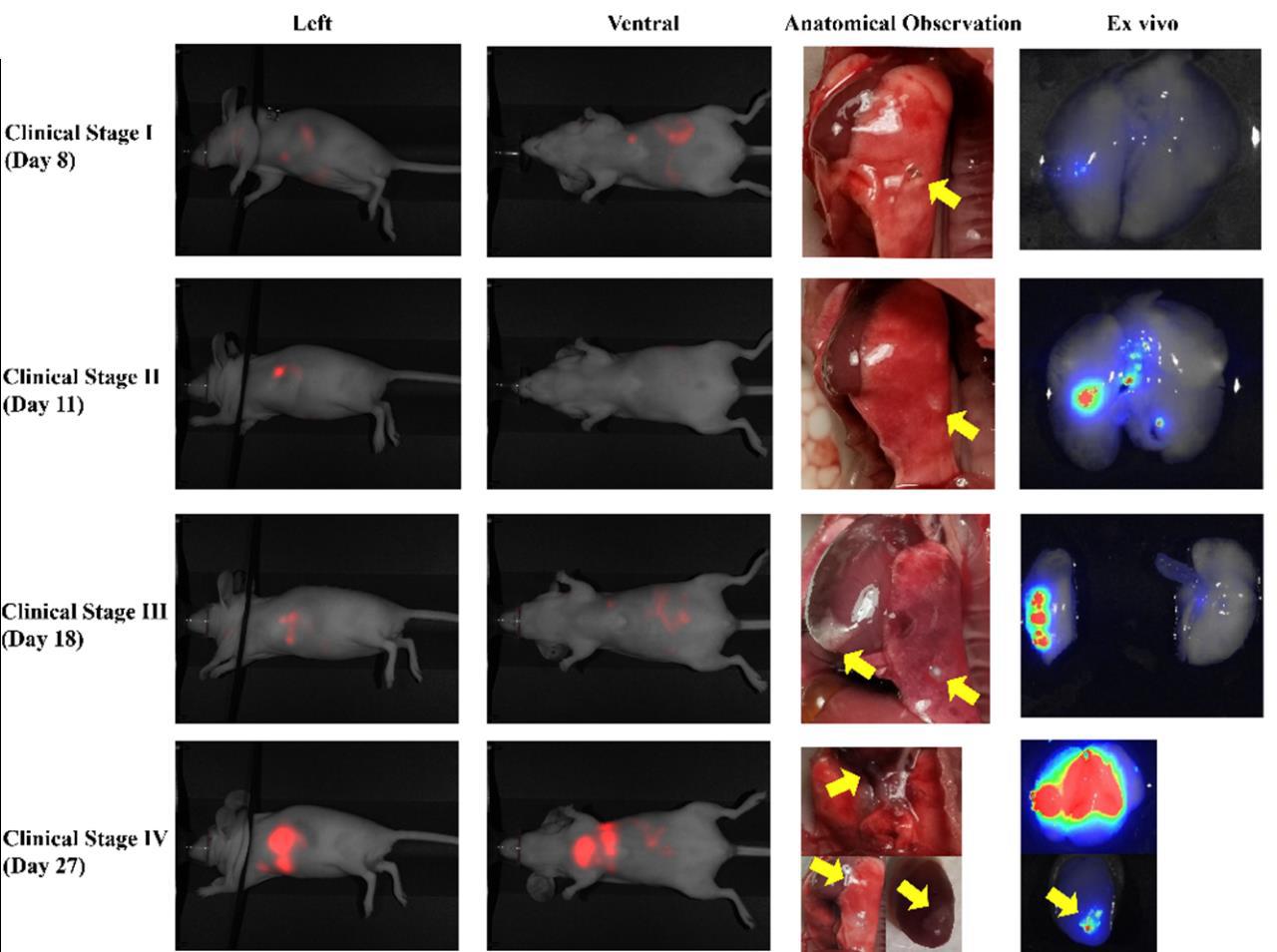