Case study – Application of Colorista® Capsules for Rapid Product Development with Proof of Concept Data for a Heat, Oxygen, and Moisture Sensitive Compound

Purpose: Compound A is easily oxidized, susceptible to hydrolysis, and rapidly degrades at room temperature. The objective of this study was to design the most suitable solid oral delivery system with an acceptable shelf life at room temperature or at refrigerated conditions. This study was initiated with an extensive excipient compatibility study using pharmaceutical excipients and stabilizers, followed by a blend stability study, a manufacturing process and dosage form selection study, and an accelerated stability study using the final formulation in Colorista® capsules.

Methods: For the excipient compatibility study, several commonly used excipients in oral solid dosage form were selected and a binary mixture was prepared with API and excipient. The samples were stored in open vials at high temperature and extreme humidity conditions generated using saturated salt solutions to accelerate any potential interactions between the API and excipients. These samples were evaluated up to 2 weeks to identify excipients that presented the least amount of degradants from compound A. The next stage was a blend study with excipients selected from the excipient compatibility study, and using increasing concentrations of multiple stabilizers. The samples were evaluated for assay and related substances at accelerated stability conditions for 2 weeks. The blend with least amount of degradants was selected for small scale manufacturing of multiple doses of the API in tablets and capsules using dry blend and wet granulation manufacturing process. The finished product was stored at accelerated stability conditions up to 5 weeks and was evaluated for assay/RS. The optimum dosage form was a capsule manufactured via dry blend, thus 3x – 6x scaleup trials were performed to evaluate the reproducibility of the manufacturing process. Finished product from scale-up trials was also packaged in bottles as well as blisters and evaluated for assay/RS up to 16 weeks at room temperature and accelerated conditions.

Results: The excipient compatibility study identified Avicel® DG, Pearlitol® 200SD, Lactose anhydrous DT,  crospovidone, Starch 1500®, colloidal silicon dioxide, magnesium stearate, sodium stearyl fumarate, stearic acid, and a set of stabilizers as the excipients of choice for formulation development with Compound A. The total impurities observed in the 2 week blend compatibility study were observed to be lower in the presence of the selected stabilizer than the total impurities observed in a control sample without the stabilizer. The stabilizer was evaluated at three different concentrations, but the results do not present a difference in stability profile for any concentration evaluated. The exact same blend formulation was used for developing multiple strengths of Compound A in tablets and capsules. The blends were manufactured using a dry blend manufacturing process in a V-shell blender, or via a high shear granulation and fluid bed drying process prior to compression or encapsulation. Compression was performed on a high speed rotary press using a single punch, whereas encapsulation was done manually in size 0 white HPMC capsules. Capsules manufactured via the dry blend process proved to be the most stable formulation when evaluated for a period of 5 weeks at accelerated stability conditions. Thus, the blends and manufacturing process were proportionally scaled-up to enable processing on a high speed automatic encapsulator. A limitation of capsules is the potential incompatibility with select colors, this was overcome by performing encapsulation in white HPMC capsules as control samples, and Colorista® (all color) capsules as an early indication of compatibility with potential capsule colors that can be used for commercial manufacturing. Scale-up formulations on all doses were evaluated at room temperature and accelerated stability conditions for a period of 16 weeks. There was not a significant impact of capsule color on the stability of the formulated finished product.

Conclusion: A potentially stable formulation and manufacturing process was identified using an extremely detail oriented development process. The finished product was observed to be significantly more stable when manufactured using a dry blend process, in a HPMC capsule rather than a tablet albeit being sensitive to moisture. The use of Colorista® capsules to demonstrate stability in the development stage will help expedite the decision on future capsule color selection, significantly reducing the risk of compatibility in late stage clinical studies. This also allows for commercial teams to evaluate multiple color options for each unique dose manufactured. 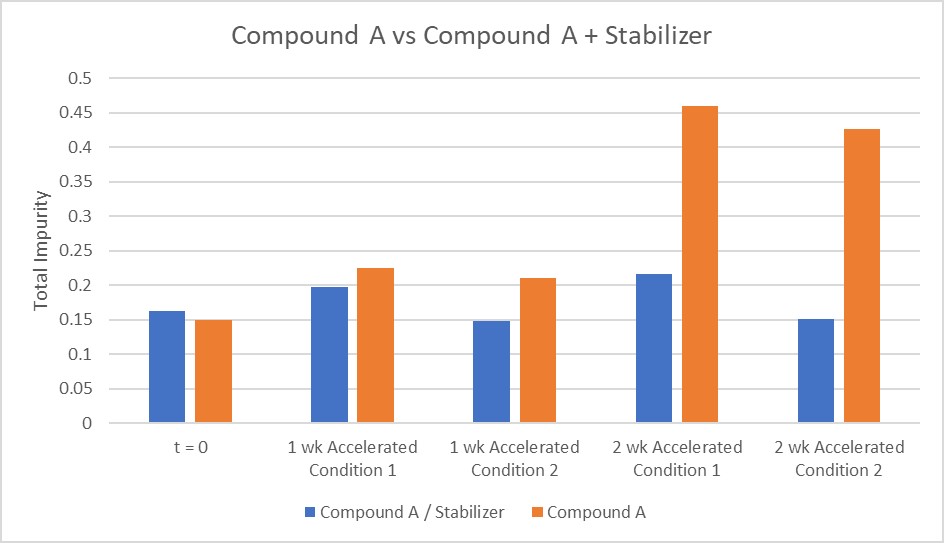 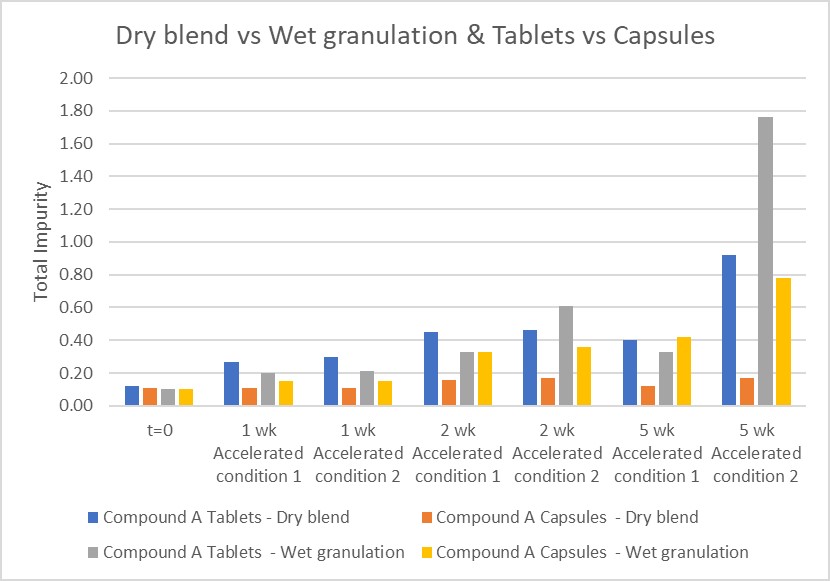 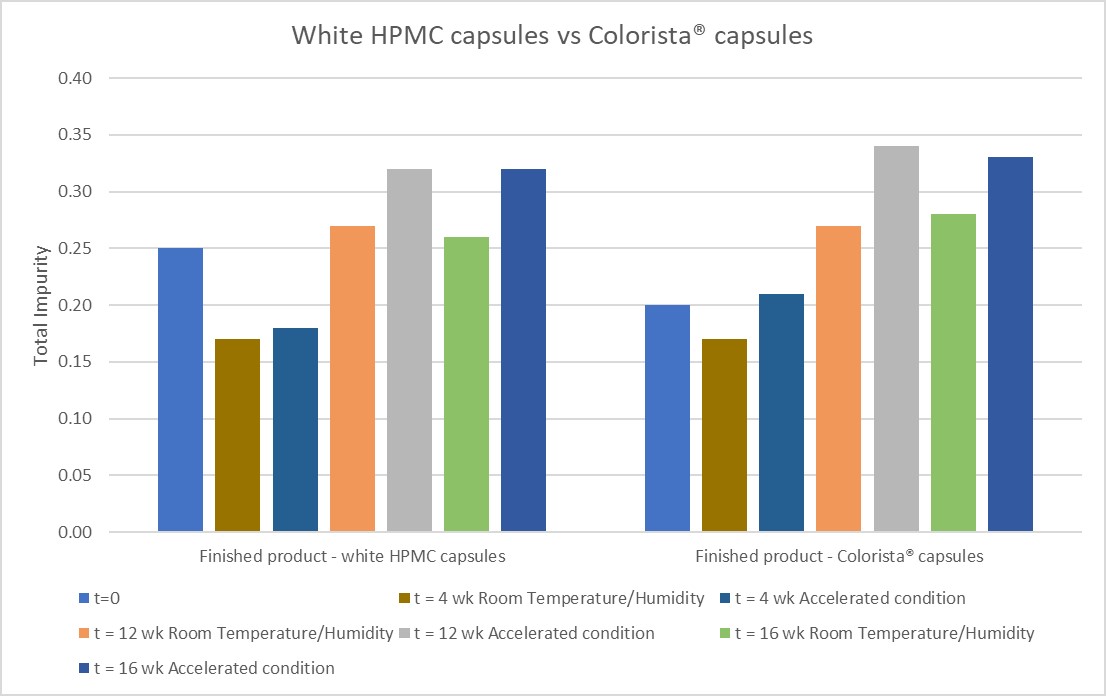