(65) ASSOCIATIONS BETWEEN LOWER-BODY POWER AND BODY COMPOSITION TO CHANGE OF DIRECTION SPEED UNDER TWO LOADING CONDITIONS AMONG FEMALE POLICE OFFICERS. 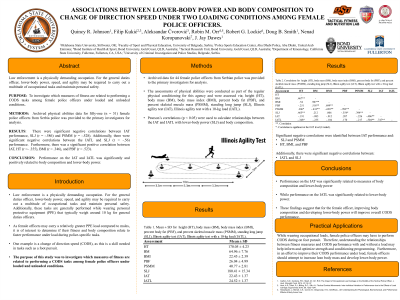 Law enforcement is a physically demanding occupation. For the general duties officer, lower-body power, speed, and agility may be required to carry out a multitude of occupational tasks and maintain personal safety. Additionally, these tasks are generally performed while wearing personal protective equipment (PPE) that typically weigh around 10 kg for general duties officers. As female officers may carry a relatively greater PPE load compared to males, it is of interest to determine if their fitness and body composition relate to faster performance under load during police-specific tasks. One example is a change of direction speed (CODS), as this is a skill needed in tasks such as a foot pursuit.

Purpose:   To investigate which measures of fitness are related to performing a CODS tasks among female police officers under loaded and unloaded conditions.

Conclusions:   Performance on the IAT and IATL was significantly related to body composition and lower-body power.  These findings suggest that for the female officer, improving body composition and developing lower-body power will improve overall CODS performance.  PRACTICAL APPLICATIONS:  While wearing occupational loads, female police officers may have to perform CODS during on foot pursuit.  Therefore, understanding the relationships between fitness measures and CODS performance with and without a load may help inform and optimize strength and conditioning programming.  Furthermore, in an effort to improve their CODS performance under load, female officers should attempt to increase lean body mass and develop lower-body power.