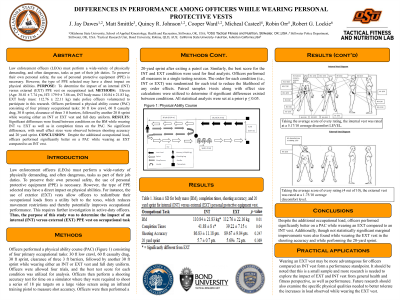 Introduction: Law enforcement officers (LEOs) must perform a wide-variety of physically demanding, and often dangerous, tasks as part of their job duties. To preserve their own personal safety, the use of personal protective equipment (PPE) is necessary. However, the type of PPE selected may have a direct impact on physical abilities. For instance, the use of exterior (EXT) vests allow officers to redistribute their occupational loads from a utility belt to the torso, which reduces movement restrictions and thereby potentially improves occupational performance. This requires further investigation in active-duty officers.

Purpose: To determine the impact of an internal (INT) versus external (EXT) PPE vest on occupational task performance.

Methods: Eleven (Age: 38.81 ± 7.74 yrs, HT: 179.9 ± 7.86 cm, INT body mass: 110.84 ± 21.83 kg, EXT body mass: 112.76 ± 22.11 kg) male police officers volunteered to participate in this research. Officers performed a physical ability course (PAC) consisting of four primary occupational tasks: 30 ft low crawl, 60 ft casualty drag, 30 ft sprint, clearance of three 3 ft barriers, followed by 20 ft another sprint while wearing either an INT or EXT vest and full duty uniform. Officers were allowed four trials, and the best test score for each condition was utilized for analysis. Officers then perform a shooting accuracy test for time on a simulator where they were required to shoot a series of 18 pie targets on a large video screen using an infrared training pistol to measure shot accuracy. Officers were then performed a 20-yard sprint after exiting a patrol car. Similarly, the best score for the INT and EXT condition were used for final analysis. Officers performed all measures in a single testing session. The order for each condition (i.e., INT or EXT) was randomized for each trial to reduce the likelihood of any order effects. Paired samples t-tests along with effect size calculations were utilized to determine if significant differences existed between conditions. All statistical analysis were set at a priori p ≤ 0.05.

Conclusion: Despite the additional occupational load, officers performed significantly better on a PAC while wearing an EXT compared to an INT vest. Additionally, though not statistically significant marginal improvements were also found while wearing the EXT vest in the shooting accuracy and while performing the 20-yard sprint. Practical application: Wearing an EXT vest may be more advantageous for officers compared an INT vest form a performance standpoint. It should be noted that this is a small sample and more research is needed to explore the impact of EXT and INT vest from general health and fitness perspective, as well as performance. Future research should also examine the specific physical qualities needed to better tolerate the increases in load observed while wearing the EXT vest.