(46) ARE THERE DIFFERENCES IN THE PHYSICAL FITNESS CHARACTERISTICS OF RECRUITS FROM SMALLER AND LARGER LAW ENFORCEMENT AGENCIES AT THE START OF ACADEMY? 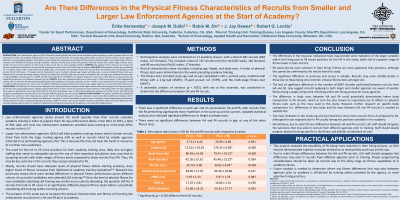 Introduction: Law enforcements agencies (LEAs) around the world typically have their recruits complete academy training in order to prepare them for law enforcement duties. LEA academy training classes can include recruits hired by the hosting large agency (HA), as well as recruits hired by smaller agencies (referred to as participating agencies; PA). Ideally, recruits should have adequate levels of physical fitness before starting academy, since higher levels of fitness increases their likelihood of academy training completion. However, HA that need to fill more positions may have recruits with a wider range of fitness levels. Smaller PA may be more selective in their hiring as they do not have as many available positions.

Purpose: The purpose of this study was to compare the physical characteristics and fitness of incoming law enforcement recruits from a HA and PA prior to academy.

Methods: Retrospective analyses were conducted on ­­­­11 academy classes, with a total of 841 recruits (684 males, 157 females). This included a total of 742 recruits from the HA (602 males, 140 females) and 99 recruits from PA (82 males, 17 females). Recruit characteristics were recorded, including age, height, and body mass. A series of physical fitness tests were administered in the week preceding academy training. The fitness tests included: push-ups and sit-ups completed in 60 s; vertical jump; medicine ball throw with a 2-kg ball (2MBT); 75-yard pursuit run (75PR), and the multi-stage fitness test (MSFT). A univariate analysis of variance (p < 0.05), with sex as the covariate, was conducted to determine the difference between recruits.