(64) WE NEED YOU: INFLUENCE OF HIRING DEMAND AND MODIFIED APPLICANT TESTING ON THE PHYSICAL FITNESS OF DEPUTY SHERIFF RECRUITS 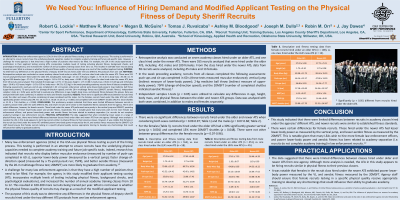 Introduction: Many law enforcement agencies (LEAs) in the USA use physical fitness testing as part of the hiring process. This testing is performed in an attempt to ensure recruits have the underlying capacities needed to complete academy training and future job-specific tasks. A challenge for many LEAs is that they have a high number of positions that need to be filled. The LEA in this study experienced a modification in their applicant testing scoring (ATS; incorporates multiple levels of testing including physical fitness, background checks, and psychological evaluations), and increased the number of annual academy training classes from 10 to 12. This resulted in 100-200 more recruits being trained per year. What is unknown is whether the physical fitness of recruits may change as a result of the modified applicant testing.

Purpose:  To determine differences in the fitness of deputy sheriff recruits hired under the two different ATS protocols from one LEA.

Methods:  Retrospective analysis was conducted on seven academy classes hired under an older ATS, and one class hired under the newer ATS. There were 555 recruits (451 males, 100 females) analyzed that were hired under the older ATS. From the class hired under the newer ATS, data from 58 recruits (45 males, 13 females) were analyzed. In the week preceding academy, recruits from all classes completed the following: push-ups and sit-ups completed in 60 s (muscular endurance); vertical jump (VJ; lower-body power); 2-kg medicine ball throw (upper-body power); 75-yard pursuit run (change-of-direction speed); and the 20-m multistage fitness test (20MSFT; aerobic fitness). Independent samples t-tests evaluated any differences in age, height, body mass, and fitness between the groups. Data was analyzed with both sexes combined, and males and females separately.

Conclusions: This analysis indicated that there were limited differences between recruits in academy classes hired under the different ATS, and newer recruits were similar to the established fitness standards from the agency. There were select differences for female recruits. Those hired under the newer ATS performed more poorly in the VJ and 20MSFT, providing some indication of lesser lower-body power and aerobic fitness, respectively. This is notable given that many LEAs wish to hire more female law enforcement officers, and poorer lower-body power and aerobic fitness has been related to academy separation (i.e. recruits do not complete academy training) in law enforcement recruits. PRACTICAL APPLICATIONS: The data suggested that there were limited differences in fitness between classes hired under older and newer ATS from one LEA. Although more analysis is needed, the LEA in this study appears to be hiring recruits similar in fitness to their previous classes. However, it was notable that females in the recruit class hired under the newer ATS exhibited poorer lower-body power measured by the VJ, and aerobic fitness measured by the 20MSFT. LEA staff should ensure that female recruits lacking in a specific quality receive training to develop any shortcomings that could influence their ability to graduate academy.