(03) STRONG ARM (AND LEGS) OF THE LAW: RELATIONSHIPS BETWEEN ISOMETRIC STRENGTH AND THE BODY DRAG IN INCOMING DEPUTY SHERIFF RECRUITS 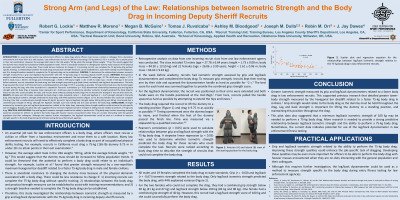 Introduction:  An essential job task for law enforcement officers is a body drag, where officers must rescue a civilian or colleague from a hazardous environment and move them to a safe location. Law enforcement recruits in California must drag a 75-kg dummy 9.75 m in under 28 s to attain points in their exit examination. However, the average adult male in the USA weighs ~89 kg, while the average female weighs ~77 kg. This would suggest that the dummy mass should be increased to follow population trends. There is anecdotal resistance to changing the dummy mass because of the physical demands associated with a body drag. There could be less resistance to change if: 1) incoming recruits can complete the 75-kg body drag without specific training; 2) relationships between the body drag and practical strength measures can be established to assist with training recommendations; and 3) a strength baseline needed to complete the 75-kg body drag can be established.

Purpose:  To determine the relationships between isometric strength measured by a grip and leg/back dynamometer with the 75-kg body drag in incoming deputy sheriff recruits.

Methods:  Retrospective analysis on data from an incoming recruit class from one agency was conducted. The class included 72 males and 21 females. In the week before academy, recruits completed the body drag, and had strength assessed by grip (both hands combined) and leg/back dynamometers. The body drag required the recruit to lift the dummy to a standing position and drag it 9.75 m as quickly as possible. Timing commenced once the dummy began to move during the drag, with time recorded via a stopwatch. Pearson’s correlations (p < 0.05) determined relationships between grip and leg/back strength with the body drag. A stepwise linear regression (p < 0.05) was used to determine whether isometric strength predicted the body drag for those recruits who could complete the task, and recruits were ranked according to body drag time to describe the strength of recruits that could not.

Conclusions: Strength measured by isometric grip and leg/back dynamometers related to the body drag. Improving these strength qualities could enhance the job-specific task of dragging. Notably, this pilot data also suggested that a minimum leg/back isometric strength of 100 kg may be needed to perform a 75-kg body drag. PRACTICAL APPLICATIONS:  Grip and leg/back isometric strength related to the ability to perform the 75-kg body drag. Further improving strength would be essential for officers to perform the body drag with heavier masses encountered when they are on-duty interacting with the general population and their colleagues. Although this requires further investigation, the leg/back dynamometer could be used as a method to measure strength specific to the body drag during entry fitness testing for law enforcement agencies.