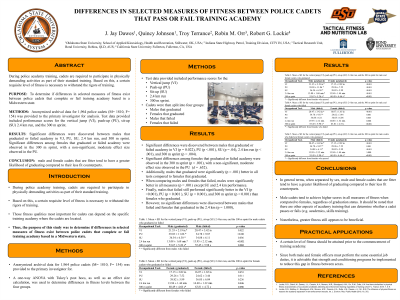 Introduction: During police academy training, cadets are required to participate in physically demanding activities as part of their standard training. Based on this, a certain requisite level of fitness is necessary to withstand the rigors of training. Those fitness qualities most important for cadets can depend on the specific training academy where the cadets are located.

Purpose: To determine if differences in selected measures of fitness exist between police cadets that complete or fail training academy based in a Midwestern state.

Methods: Anonymized archival data for 1,964 police cadets (M= 1810, F= 154) were provided to the investigators for analysis. Test data provided included performance scores for the vertical jump (VJ), push-up (PU), sit-up (SU) 2.4 km run, and the 300 m sprint. Cadets were then split into four groups (males that graduated (n= 1700), females that graduated (n=133), males that failed (n=110), and females that failed (n= 21). A one-way ANOVA with Tukey’s post hocs, as well as an effect size calculation, was used to determine differences in fitness levels between the four groups.

Conclusion: In general terms, when separated by sex, male and female cadets that are fitter tend to have a greater likelihood of graduating compared to their less fit counterparts. Male cadets tend to achieve higher scores in all measures of fitness when compared to females, regardless of graduation status. It should be noted that there are other aspects of academy training that can determine whether a cadet passes or fails (e.g. academics, skills training). Nonetheless, greater fitness still appears to be beneficial. Practical Application: A certain level of fitness should be attained prior to the commencement of training academy. Since both male and female officers must perform the same essential job duties, it is advisable that strength and conditioning programs be implemented to reduce this gap in fitness between sexes.