Levels, Trends and Inequalities in Anemia and Obesity Among Adolescent Girls and Adult Women in Sub-Saharan Africa: Reaching the Unreached in a Double Burden Scenario 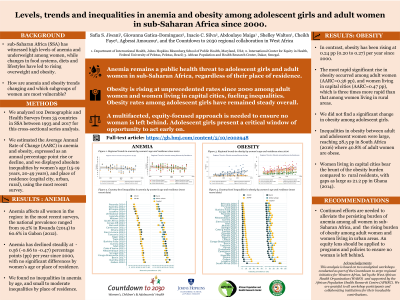 There is limited evidence on the double burden of malnutrition among women in sub-Saharan Africa. We measure trends and inequalities in anemia and obesity to reach the most vulnerable and ensure no woman is left behind.

We analyzed 101 DHS surveys between 1993 and 2017 from 35 sub-Saharan African countries. We ran multilevel linear regression models to estimate the average annual rate of change (AARC) in anemia and obesity by woman’s age and place of residence. We quantified the absolute gap in these indicators between subgroups, using the latest surveys.

A double malnutrition burden is apparent with persisting anemia while obesity rises and gets unequally distributed among sub-Saharan African women. An equity-focused approach is needed to address marked disparities.