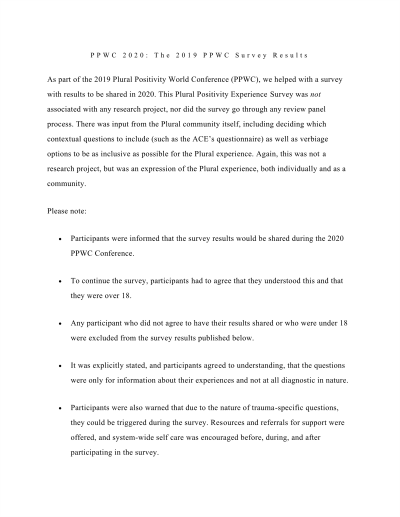 As part of the first annual Plural Positive World Conference (PPWC), we conducted an international survey regarding survivor experiences of clinical treatment for dissociative disorders. There was input from the Plural community itself, including deciding which contextual questions to include (such as the ACE’s questionnaire and the DES) as well as verbiage options to be as inclusive as possible for the Plural experience globally.

This survey was designed by Plurals themselves, as a community, following online discussions in support groups, peer mentoring groups, and a variety of social platforms. The common threads of interested were narrowed down and presented in polls on the social platforms. From these results, the questions included in the survey were designed. While obviously vast and covering a multiplicity (pun intended) of areas, these were the general issues Plurals themselves wanted to know more about and were interested in learning in regards to shared experiences.

The PPWC organizers had an initial goal of 100 responses from different people diagnosed with DID or otherwise identifying as “multiple” or “plural”. The link to the survey was shared in all known dissociative disorder and plural community support groups on Facebook, posted and shared on Twitter, and then also explained and shared on other communities including Discord, Reddit, and Tumblr. The link was also left live on the System Speak website, and we did discuss it on the podcast, encouraging listeners to complete the survey. The link was left live for six months so that as many could participate in the survey as possible.

Ultimately, the survey received 863 responses from different IP addresses (which were not tracked or recorded, but filtered only for non-repetition of the survey), and included responses from survivors in 61 countries. While not research, it was the project done for Plurals, by Plurals, with interesting results regarding clinical experiences which could be further addressed in research.