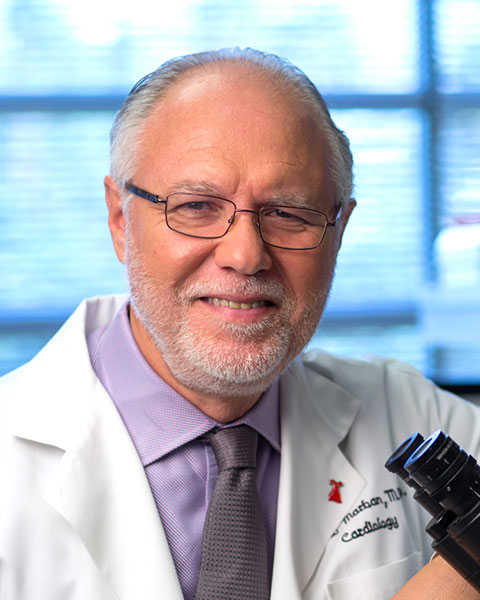 Eduardo Marbán, MD, PhD, is an international leader in cardiology and a pioneering heart researcher. His 30-plus years of experience in patient care and research have led to key discoveries in gene and stem cell therapies for heart disease. Those discoveries have formed the basis for multiple startup companies.

Marbán attended public schools through high school and later Wilkes College, where he earned a BS in Mathematics. Thereafter, Marbán completed a combined MD/PhD program at Yale University. Postgraduate training took him to the Osler Medical Service at the Johns Hopkins University, where he eventually spent 26 productive years. During his tenure there, he served in a variety of academic and research leadership positions, including Chief of Cardiology.

In his research career, Marbán, a cellular electrophysiologist by training, has pursued questions of relevance to heart disease (ischemia, heart failure and arrhythmias). The Marbán laboratory elucidated the fundamental pathogenesis of myocardial stunning, pioneered the concept of gene therapy to alter electrical excitability, and created the first de novo biological pacemaker as an alternative to electronic pacemakers. He first became interested in stem cells in 2002, building upon his work on biological pacemakers. Since 2004 the lab has been intensively studying cardiac progenitor cells, their origins and their therapeutic potential. The basic work has come full circle in that Marbán’s cardiac-derived cell products form the basis for 6 grant-funded clinical trials: four completed (CADUCEUS, DYNAMIC, ALLSTAR, and HOPE-Duchenne), and two ongoing (Regress-HFpEF and ALPHA). A major focus of his work now is on the role of extracellular vesicles as therapeutic platforms.

In 2007, Dr. Marbán became founding director of the Cedars-Sinai Heart Institute, a multidisciplinary entity which brings together adult and pediatric cardiologists, cardiac surgeons, imaging specialists and researchers to foster discovery and enhance patient care. The institute, which was renamed the Smidt Heart Institute in 2018, is built on a long tradition of excellence and innovation at Cedars-Sinai, including the invention of the Swan-Ganz catheter. The Smidt Heart Institute, ranked by US News and World Report as the top heart program in the western USA since 2013, performs more heart transplants annually than any other institution worldwide.

Among the many honors Dr. Marbán has received are the Basic Research Prize of the American Heart Association (AHA), the Research Achievement Award of the International Society for Heart Research, the Gill Heart Institute Award and the Distinguished Scientist Awards of the AHA and the American College of Cardiology.