Where's the closest AED?": An interprofessional simulation to improve the "drop to shock" interval on campus

"Where's the closest AED?": An interprofessional simulation to improve the "drop to shock" interval on campus 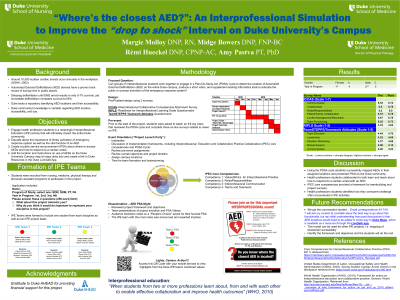 Around 10,000 sudden cardiac arrests occur annually in the workplace, according to the OSHA. A combination of early CPR and defibrillation can increase a person’s chance of survival significantly. The average response times for first responders once 911 is called is 8-12 minutes. For each minute defibrillation is delayed, the chance of survival is reduced approximately 10%. A successful Public Access Defibrillation program’s objective is to achieve a 3-minute response time from collapse of victim to arrival of the AED unit. The efficacy of defibrillation is directly tied to how quickly a shock is administered. Thus, it is imperative that all be aware of the location of AEDs. Students from the schools of medicine, nursing, physical therapy, and physician assistant “crowdsourced” (tapped into collective intelligence to complete a task) to determine the number, placement, and access systems for AEDs. Mixed groups of 4-5 students collaborated to meet the objectives over a 4-week time-frame. A campus location was assigned to a group to determine if AEDs are centrally located within the highest risk and most concentrated population areas, availability of phones to call 911, and building accessibility. Student groups completed the PDSA cycle to determine how they will strategically locate campus AEDs and each produced a simulation of the process. Groups were guided by collaborators from the healthcare disciplines and explored current campus resources for emergency preparedness and feasibility of supplementing current informatics resources with AED location and general operating instructions.