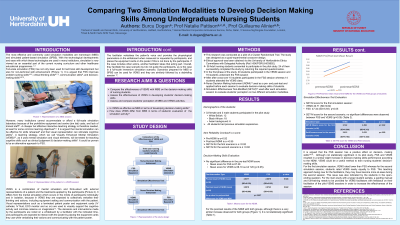 Full-scale simulation is viewed as an essential part of the nursing curriculum. However, many institutions cannot accommodate or afford a full-scale simulation(FSS) laboratory. A cheaper but effective interactive teaching strategy is therefore needed, at least for some common learning objectives. It is argued that mental simulation can be effective for skills rehearsal and that visual representation can stimulate cognitive ability. A teaching strategy, which we call Visually Enhanced Mental Simulation (VEMS), as it uses mental simulation and visual elements, will be tested for teaching decision-making skills. This study aims to explore how VEMS affects students' decision-making skills and how this effect differs from full-scale simulation and how student’s perception about these two modalities differs.

Method: The study was designed as a quasi-experimental crossover design. 36 third-year adult nursing students participated in this pilot study. The students are divided into two different groups and each group exposed FSS or VEMS session. Nurse Decision-making Instrument(NDMI) as pre/post-test and Simulation Effectiveness Tool(SET) to evaluate and compare students perspective was used before and after crossover.
Result: Data analysis revealed that there is no significant difference in the pre-test NDMI score for two groups. After interventions, there is a similar increase in Decision making score changes for both groups despite the non-significance increase (p>0.05). Also, no significant difference is observed between students' rating for FSS and VEMS sessions based on SET score (p>0.05) for two different sessions. This may suggest that VEMS could be a useful method to train nursing students’ decision-making skills.