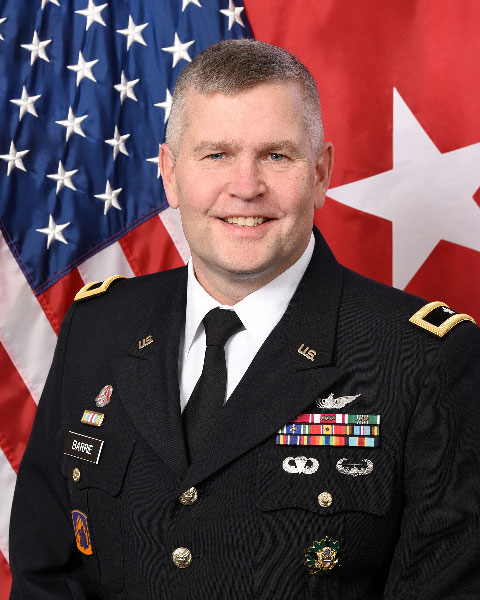 BG Barrie was commissioned as an aviation officer after graduation from the United States Military Academy in 1990. After completion of UH-60 flight training, he was assigned to the 7-227th Aviation Regiment, First Armored Division, Germany, where he served as an Assault Helicopter Platoon Leader and Battalion Staff Officer.
He was then assigned to Fort Hood, Texas where he commanded B Company, 2-227th Aviation Regiment in the First Cavalry Division. After completing his company command, BG Barrie attended the Naval Postgraduate School where he earned a Master of Science degree in
Aeronautical Engineering. He was subsequently assigned to the NASA Glenn Research Center where he researched the effects of exposure to high-temperatures on turbine engine materials.
In 2004, after attending the Command and General Staff College, BG Barrie was assigned to PEO Aviation, Redstone Arsenal, Alabama where he served as the Assistant Product Manager for the UH-60M Product Office and later as the Executive Officer to the Program Executive Officer. He then served as Product Manager for the Joint Air-to-Ground Missile with PEO Missiles and Space from 2008 to 2011.
Upon completion of the Air War College in Montgomery, Alabama in 2012, BG Barrie was assigned to the Pentagon where he served as Executive Officer to the Principal Military Deputy to the Assistant Secretary of the Army for Acquisition, Logistics and Technology.
From 2013 to 2017, he was the Project Manager for Cargo Helicopters in PEO Aviation. Following this assignment, he served in the Pentagon as the Chief of Staff for ASA (ALT). He returned to PEO Aviation as the Military Deputy in 2019 and served as the Deputy PEO, Aviation from January to June 2020.
BG Barrie’s awards and decorations include the Legion of Merit, Meritorious Service Medal, Army Commendation Medal, Senior Army Aviator Badge, Parachutist Badge and Air Assault Badge. He is rated in the Chinook, Black Hawk and Huey helicopters.