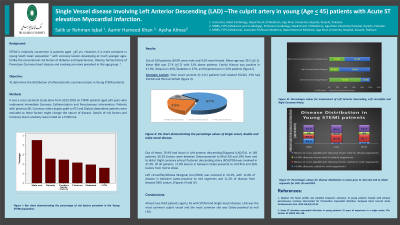 Background: STEMI is relatively uncommon in patients aged <45 yrs. However, it is prevalent in young South Asian population. The objective in this study was to determine the extent of coronary lesions in Young STEMI patients.

Methods: It was a cross-sectional study done from 2013-2018 on STEMI patients aged <45 years who underwent immediate Coronary Catheterization and Percutaneous Intervention. Patients with previous MI, Coronary artery bypass graft or PCI were excluded. Details of risk factors and Coronary lesion anatomy were noted on a Performa.

Conclusions: Almost two third patients aged < 45 with STEMI had Single Vessel disease. LAD was the most common culprit vessel and the most common site was Osteo-proximal to mid LAD.