Treatment of bleeding by endovascular approaches of patients with pancreatitis. 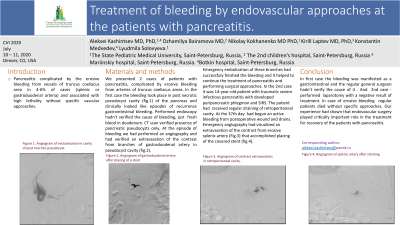 Introduction
Pancreatitis is complicated by the bleeding from vessels of truncus coeliacus area in 4-6% (splenic or gastroduodenal arteria) and is associated with high lethality without specific vascular approaches.
Material and methods
We presented 4 cases of patients with pancreatitis, complicated by erosive bleeding from arteries of truncus coeliacus areas. In 3 cases bleeding took place in postnecrotic pseudocyst cavity of the pancreas and clinicially looked like episodes of recurrence gastrointestinal bleeding. Performed endoscopy had not verified the cause of bleeding, just fresh blood in duodenum. In all cases we performed CT scan angiography , after that verified an extravasation of a contrast from branches gastroduodenal artery. Emergency embolization of these branches had successfully finished the bleeding and it helped to continue the treatment of pancreatitis and performed surgical approaches. In last case was a patient , 14 year old, with traumatic severe infectious pancreatitis with developed parapancreatic phlegmona and SIRS. Patient received regular drainig of retroperitoneal cavity. At the 37th day had begun active bleeding from postoperative wound and drains. Emergency angiography had visualized the extravasation of a contrast from erosive splenic artery that accomplished placing of a covered stent.

Conclusion: In first 3 cases bleeding is often manifested as a gastrointestinal and a regular general surgeon had not verified the cause of it , the laparotomy gives negative results of a treatment. In case of erosive bleeding patients died without specific approaches. Our experience showed that endovascular surgery played critical important role in treatment for recovery of the patients with pancreatitis.