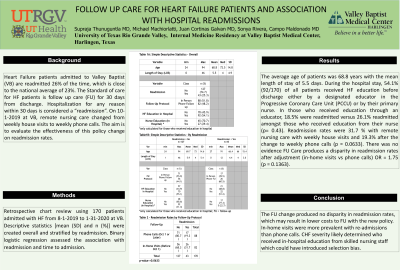 Background:
Heart Failure patients admitted to Valley Baptist (VB) are readmitted 26% of the time, which is close to the national average of 23%. The Standard of care for HF patients is follow up care (FU) for 30 days from discharge. Hospitalization for any reason within 30 days is considered a “readmission”. On 10-1-2019 at VB, remote nursing care changed from weekly house visits to weekly phone calls. The aim is to evaluate the effectiveness of this policy change on readmission rates.

Methods:
Retrospective chart review using 170 patients admitted with HF from 8-1-2019 to 1-31-2020 at VB. Descriptive statistics [mean (SD) and n (%)] were created overall and stratified by readmission. Binary logistic regression assessed the association with readmission and time to admission.

Results:
The average age of patients was 68.8 years with the mean length of stay of 5.5 days. During the hospital stay, 54.1% (92/170) of all patients received HF education before discharge either by a designated educator in the Progressive Coronary Care Unit (PCCU) or by their primary nurse. In those who received education through an educator, 18.5% were readmitted versus 26.1% readmitted amongst those who received education from their nurse (p= 0.43).
Readmission rates were 31.7 % with remote nursing care with weekly house visits and 19.3% after the change to weekly phone calls (p = 0.0633). There was no evidence FU Care produces a disparity in readmission rates after adjustment (in-home visits vs phone calls) OR = 1.75 (p = 0.1363).

Conclusions:
The FU change produced no disparity in readmission rates, which may result in lower costs to FU with the new policy. In-home visits were more prevalent with re-admissions than phone calls. CHF severity likely determined who received in-hospital education from skilled nursing staff which could have introduced selection bias.