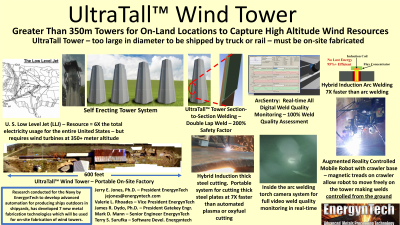 Presentation Description: EnergynTech has developed seven new fabrication technologies – R&D funding from the U.S. Navy for use outdoors in shipyards. These new technologies utilize mobile/portable robots. This enables economical on-site fabrication of towers the diameter of which is much too large for road or rail transport. The tower is also self-erecting, and the sections are welded together using a new welding process developed for the Navy and a mobile VR Controlled welding robot – which crawls on the tower sections using a magnetic tread system similar to a bulldozer. A 250m tower design will support large 10 MW “offshore” turbines. Designed to take advantage of the Low Level Jet everywhere in most of the Central and Eastern Great Plains. The ultra-high-speed cutting, welding, and forming processes have been vetted for Navy ships and meet all wind tower requirements. As each tower section is lifted (by an internal cabling system), it is welded to the previous section. A 1/16 scale tower has been fabricated and the self erection system testing and works well – no large crane is needed. The Nacelle is lifted by the self-erecting tower. A completely new wind tower technology enabled by new fabrication technology research funded by the Navy.