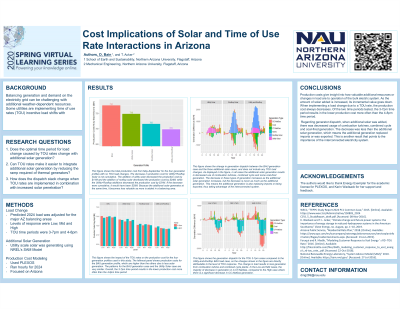 Presentation Description: Increasing amounts of wind and solar on the electricity grid creates challenges and opportunities for grid operators. Traditionally, operators have changed generation to match load. This is more challenging to do with renewable generation resources and so there is an opportunity to move load to better match generation.
One way to do this is time of use rates (TOU), which use price differences to incentive conserving electricity during peak hours – usually late afternoon and early evening- and encouraging use during low load or high generation hours. This strategy is being used across the United States more and more.
This analysis uses the production cost model PLEXOS to explore how production costs, locational marginal prices and dispatch stacks change due to changes in TOU load shapes and generation profiles with additional solar. Twelve load shapes were used in addition to the business as usual, a combination of three response levels, two time periods and two off-peak distributions.

Methodology: It would be interesting to have participants discuss how they would change their own electricity use behavior in response to TOU rates.