Is Wind "Power to Gas" Ready for Prime Time on the North American Grid? 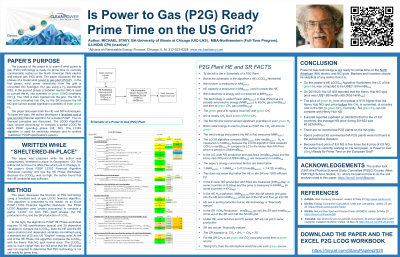 Presentation Description: The audience will learn if wind power to gas (WP2G) is ready for prime time on the North American (NA) electric and natural gas (NG) grids. The speaker will discuss the two phases of a model WP2G plant (WP2GP). First, wind power (electricity) from the grid is converted into hydrogen (H2) gas using a H2 electrolyzer (HE). Second, a Sabatier reactor (SR) is use to convert the H2 into synthetic NG [methane (CH3)]. The synthetic NG is then injected into the NG grid. The presentation discusses both the HE and SR technologies.

The speaker developed a levelized cost of gas (LCOG) financial algorithm for a model WP2GP. The LC financial principles are discussed. The LCOG Algorithm uses “project accounting” to compute a separate LCOG for each WP2GP phase. This LCOG algorithm is used for sensitivity analysis and to confirm published WP2GP specifications (specs).

To compute the LCOG, the financial algorithm requires 18 WP2GP specs [metrics]. The algorithm's 18 WP2GP specs (independent variables) and 25 dependent variables are defined using US "English" units. The H2 industry practice is to measure H2 production in KgH2 (Nm^3H2) and to price H2 in US$/KgH2 (US$/Nm^3H2). The NA NG industry practice is to measure NG production in ft^3 and to price NG in US$/mmBtu. For this presentation, both H2 and NG production (mmBtuH2; mmBtuNG) and price (US$/mmBtuH2; US$/mmBtuNG) are measured in mmBtu.

The speaker did sensitivity analysis. He found that low round trip WP2GP efficiency (η) and high WP2GP CapEx do not allow a WP2GP to operate commercially in NA. The cost of capital was not a factor. The computed HE phase H2 LCOG is greater than the current price of NG at the Henry Hub. Using this H2 as feed stock for the SR phase would produce an even higher LCOG for synthetic NG (CH3).

Methodology: The speaker has developed a levelized cost of gas (LCOG) financial algorithm for a wind power to gas plant (WP2GP). He will present his algorithm on an interactive Excel WP2GP LCOG Financial Algorithm Workbook projected onto the screen.