(17) Melanoma brain metastasis: Presentation, treatment and outcomes in the age of targeted- and immuno-therapies 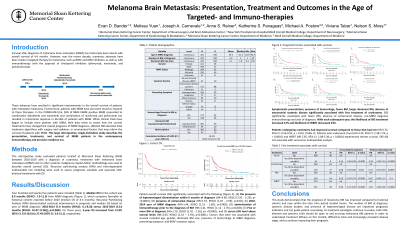 Background: Melanoma brain metastasis (MBM) prognosis has historically been dismal. However, breakthroughs in targeted and immunotherapies have improved long-term survival in advanced melanoma. As such, MBM presentation, prognosis and multimodality CNS-directed treatment use were reassessed in this contemporary age of treatment.

Conclusions: MBM prognosis has improved in the period following targeted and immunotherapy introduction, and even within the last 5 years of this study. Improving survival reflects and may influence the willingness to use aggressive multimodality treatment for MBM.