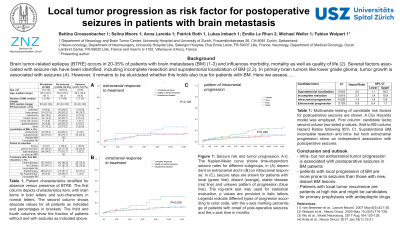 Purpose: Brain tumor-related epilepsy (BTRE) occurs in 20-35% of patients with brain metastases (BM) and influences morbidity, mortality as well as quality of life. Several factors associated with seizure risk have been identified, including incomplete resection and supratentorial localization of BM. In primary brain tumors like lower grade glioma, tumor growth is associated with seizures. However, it remains to be elucidated whether this holds also true for patients with BM.

Method: We identified 295 patients who had been diagnosed with BM between 2004 and 2014 by review of our electronic chart system. Occurrence of new onset of postoperative seizures dependent on BM progression was tested during the clinical course as well as pattern of progression and previously described predictors of postoperative seizures. Chi-square test was used for univariate analysis, a Cox-regression model for multivariate testing.

Conclusion: Here we define tumor progression as a risk factor for the development of postoperative seizures in a well defined cohort of BM patients. Extracranial tumor recurrence seems to be not significant for seizure risk. Subgroup analysis indicates that patients with local progression of BM are more prone to seizures than those with new, distant BM lesions. Patients with local tumor recurrence might thus be candidates for primary prophylaxis with antiepileptic drugs.