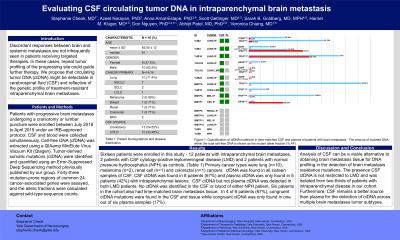 Introduction: Discordant response between brain and systemic metastases occur in patients receiving targeted therapies and repeat tumor profiling of the progressing site could guide further therapy. We propose that circulating tumor DNA (ctDNA) might be detectable in the cerebrospinal fluid (CSF) and reflective of the genetic profile of intraparenchymal brain metastases.

Methods: Patients with brain metastases undergoing a craniotomy or lumbar puncture were enrolled between July 2018 to April 2019 under an IRB-approved protocol. CSF and blood were collected simultaneously. Cell-free DNA (cfDNA) were extracted and ctDNA were identified and quantified using an Error-Suppressed Deep Sequencing method previously published by our group. Forty-three mutation-prone regions of 24 cancer-associated genes were assayed, and the allelic fractions were calculated against wild-type sequence counts.

Results: Sixteen patients were enrolled in this study - 12 patients with intraparenchymal brain metastases, two patients with CSF cytology-positive leptomeningeal disease (LMD) and 2 patients with normal pressure hydrocephalus (NPH) as controls. Primary cancer types were lung (n=10), melanoma (n=2), renal cell (n=1) and colorectal (n=1) cancers. cfDNA was found in all sixteen samples of CSF. CSF ctDNA were found in eight patients (67%) and plasma ctDNA were only found in five patients (42%) with intraparenchymal tumors. In six patients with additional time-matched brain metastasis tissue, four were found to have congruent mutations in the CSF, while only one harbored such mutation in the plasma.

Discussion: Analysis of CSF can be a viable alternative to obtaining brain metastasis tissue for DNA profiling in the detection of novel and resistance mutations. The presence CSF ctDNA is not restricted to LMD and were isolated from two-thirds of patients with intraparenchymal disease in our cohort. Furthermore, CSF remains a better source than plasma for the detection of ctDNA across multiple brain metastases tumor subtypes.