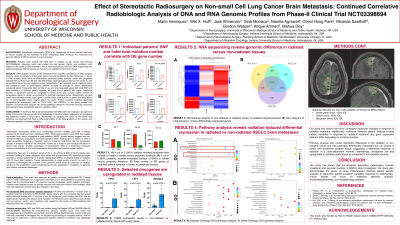 Background: Stereotactic radiosurgery (SRS) is an increasingly common modality used with or without surgery for the treatment of brain metastases (BM). However, the effects of SRS on tumors in vivois unknown.

Methods: Patients were treated with SRS prior to surgery as per clinical trial NCT03398694. Resected tumor was divided into two groups: ‘center’ and ‘periphery’ with respect to SRS treatment. Tissue were analyzed by DNA and RNA sequencing and compared between the two and to non-radiated tumor.

Results: DNA analysis showed at the individual level, matched comparison of SRS samples from the center or periphery of the same tumor had mutational burden differences. RNA analysis revealed no differentially expressed genes between center and periphery, but there were 62 and 192 differentially expressed genes between the center or periphery and non-radiated control, respectively. At an individual level, matched center and periphery tumor had an average of 16641 differentially expressed genes. Comparing total number of up- and downregulated genes with SNP and Indel mutations of matched patient samples, in patients with higher mutational burdens in peripheral tumors as compared to center there was a higher number of upregulated genes. Reciprocally, when mutation burden was higher in center tumor, total number of genes that were either up- or downregulated were about the same. Pooled analysis revealed significant downregulation of oncogenes, such as TP63 and RECQL4, in the SRS group. DO enrichment analysis also revealed pathways related to NSCLC and lung carcinoma significantly altered in radiation cohort.

Conclusion: In summary, this study demonstrates that SRS alters the molecular and genomic profile of NSCLC BM. It results in downregulation of oncogenes and pathways related to lung cancer. Additionally, by sampling the tumor at the center and periphery, there are differential effects of the dose gradient on the cellular and molecular response to ionizing radiation.