(45) Delay or failure to administer stereotactic radiosurgery to the cavity after surgery for brain metastases. An intention-to-treat analysis. 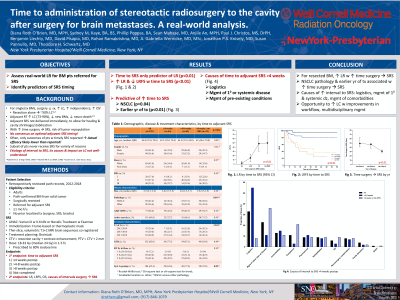 Background: Data regarding the efficacy of adjuvant stereotactic radiosurgery (SRS) for resected brain metastases (BM) is often limited to patients completing SRS within a specified timeframe. We performed an intention-to-treat analysis to determine local recurrence (LR) for all BM patients referred for SRS.

Methods: We retrospectively identified resected BM patients referred for SRS between 2012 and 2018. Patients were divided based on delay to SRS into four categories: 1)≤4 weeks, 2) >4-8 weeks, 3) >8 weeks, and 4) never received. We investigated the relationship between delay to SRS and LR, local recurrence-free survival (LRFS), and overall survival, as well as the predictors of and reason for delays.

Conclusion: A significant number of patients referred for SRS never receive it, or are treated with a delay >8 weeks, conferring equivalent LR risk. Accordingly, the actual efficacy of adjuvant SRS may need reassessment. Reasons for delays and mechanisms for reducing them are discussed. For patients likely to experience significant delays, other techniques, such as preoperative SRS or intraoperative brachytherapy, may be considered.