(72) The combined use of steroids and immune checkpoint inhibitors in brain metastases patients: a systematic review and meta-analysis 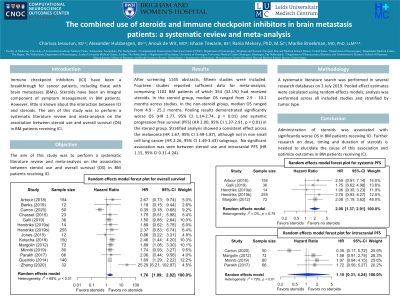 Introduction: Immune checkpoint inhibitors (ICI) are increasingly being administered to cancer patients, including those with brain metastases (BMs). However, little is known about the interaction between ICI and steroids such as dexamethasone. The aim of this study was to perform a systematic literature review and meta-analysis on the association between steroid use and overall survival (OS) in BM patients receiving ICI.