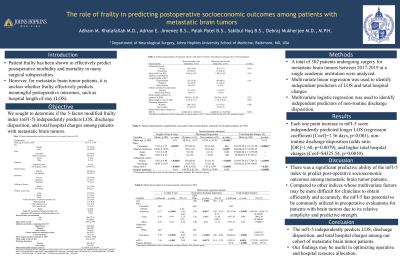 Background: Patient frailty is an important consideration in the context of providing high-value, cost-effective care, as it has shown to effectively predict postoperative morbidity and mortality in many surgical subspecialties. However, for metastatic cancer patients, there is a lack of consensus as to whether frailty effectively predicts postoperative outcomes such as survival and length of stay (LOS), specifically among patients with metastatic brain tumors.

Results: A total of 302 patients were included in our analysis. Our patient cohort had a mean age (standard deviation) of 62.2711.86 years, and was majority female (52.0%) and Caucasian (74.2%). The majority of patients had a primary lung cancer (24.8%), followed by breast cancer (13.6%). There was no significant difference in mFI-5 score between patients with metastatic tumors of known origin compared to patients with metastatic tumors of unknown origin (p=0.61). In multivariate analysis, a higher mFI-5 score independently predicted longer LOS (regression coefficient [Coef]=1.36 days, p<0.001), non-routine discharge disposition (odds ratio [OR]=1.60, p=0.0079), and higher total hospital charges (Coef=$4325.54, p=0.0010).

Conclusions: The mFI-5 independently predicts LOS, discharge disposition, and total hospital charges among our cohort of metastatic brain cancer patients. Our findings may be used to aid physicians in providing high-value neurosurgical care.